Dr. Toonz is the third game in the famous Reactoonz series from Play'n GO. This enjoyable 6-reel, 262,144 ways to win space-themed slot introduces the world to the mad scientist behind the familiar Reactoonz aliens, Dr. Toonz! Players can win up to 22,000x their stake by triggering special modifiers from the Quantumeter or triggering up to 25 free spins that boast huge multipliers up to 64x.

“ An all-round improvement on Reactoonz 1 and 2! Play if you enjoyed the originals ”

Jump straight into the action and play Dr. Toonz now at the following fully licenced UK slot sites. These slot sites have been thoroughly audited and reviewed by the team here at Slot Gods to ensure they offer an exceptional user experience, are trustworthy, safe, secure, and boast the best selection of online slots in their portfolio including Dr. Toonz...

We'd forgive you for being slightly intimidated by Dr. Toonz considering the original slots have a reputation for being confusing! This game will require you to at least glance over the game rules (or this review) before you start spinning... But once you get going you'll have a lot of fun!

Gameplay is all about charging up the Quantumeter (the spaceship Dr. Toonz flies around in) in order to modify gameplay and increase your chances of winning. In addition to this players will want to trigger the free spins feature by landing between 3 and 6 scatters symbols.

Dr. Toonz floats to the left of game reels in a small spaceship known as the Quantumeter. It has 3 lights on the front of it and a growing ball of energy floating directly below it.

The Quantumeter starts at 0 to 2 charges on each and every spin during base gameplay. Each winning cascade charges it by 1 (lighting up one of the 3 lights and growing the ball of energy slightly). A fully charged Quantumeter activates after 3 successful cascades and once all winning combinations have been collected.

Depending on the colour of the lights and ball of energy, a different modifier will kick in upon reaching full charged, these modifiers are as follows:

Whenever players land a certain number of scatter symbols on the game reels then they'll automatically trigger the game's free spins. During this bonus, one or more reel is selected to have a 2x multiplier, which doubles the win amount of symbols on that reel.

It's possible for up to 6 multipliers to be active at any given time during the free spins bonus, meaning the win amount can reach up to a grand total of 64x.

The number of scatters needed to trigger the free spins bonus is as follows:

During free spins, the Quantumeter starts with 1 or 2 charges on each free spin. Free spins cannot be re-triggered. 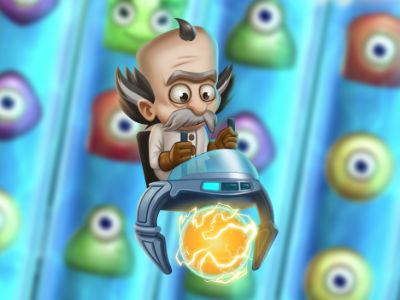 Players can land bigger wins by charging up the Quantumeter with successful cascades, this triggers Quantum Wilds, Metamorphosis and Disintegration. 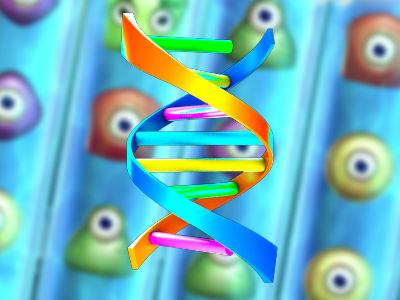 Landing between 3 and 6 scatter symbols anywhere on the reels will trigger the free spins bonus which sees random reels boosted by win multipliers.

Dr. Toonz is the latest addition to the hugely popular Reactoonz slot series. This 6-reel, 262,144 ways to win Space-themed slot is significantly different from previous entries in the series as it's no longer cluster pays, but we think Play'n Go have gotten this game right!

Players can charge up a Quantumeter by way of cascading wins to trigger Quantum wilds, Metamorphosis and Disintegration... In addition to this, landing between 3 and 6 scatter symbols can trigger up to 25 free spins with multipliers in play!

Play'n GO set the tone nicely from the moment the game is launched by dazzling players with an opening screen that sees a pair of eyes look around before Dr Toonz loudly exclaims "Oh ho! I am Dr. Toonz!" before the reels (and Dr. Toonz) are dramatically revealed, it certainly grabbed our attention and got gameplay off to a good start.

Dr. Toonz himself floats on a small floating spaceship to the left of the game reels. This ship holds onto a special ball of energy that grows and grows with each win, exploding and causing something special to occur later on down the line. The game reels are special liquid-filled tubes that play host alien symbols that you'll instantly recognise from Reactoonz and Reactoonz 2.

A low-key sci-fi soundtrack plays gently in the background along with the sound of the flowing liquid-filled tubes... There's also a whole host of voice-acted clips.

Normally, we'd be incredibly complimentary of a game that has voice acting, but we found Dr. Toonz to be a bit too much if we're being completely honest.

We quickly realised that if you load the game and don't make any spins immediately then you're bombarded with the same repetitive audio clip of Dr. Toonz snoring or shouting "come on!" at you... And boy did it get annoying in less than a minute.

The voice clips aren't as regular when the game is actually being played normally, but if we ever took a break from spinning the reels then we found we had to mute the game, and that's not ideal... Props to Play'n GO for making an effort, but they perhaps need to tone it down a little bit in places.

You'll quickly realise that this slot is nothing like the original Reactoonz games, rather than being played on a grid as a cluster pays slot this slot plays like a traditional 6-reel slot. Winning combinations are removed from the reels and new symbols cascade into view, re-filling the empty positions, potentially forming brand new wins.

Like the previous games there's a Quantumeter that can see Quantum wilds, Disintegration and Metamorphosis occur, however it does work slightly differently to the original slots, and all in all, it's actually slightly easier to understand and play in our honest opinion.

This high volatility slot has a standard RTP of 96.25% (which may vary significantly depending on which site you're playing at). The maximum players can pick up playing Dr. Toonz is a cool 22,000x their stake, which is out of this world! Big wins will mainly come by way of the free spins bonus which features multipliers on certain game reels... The Quantumeter also does a pretty grand job at rewarding players.

One of our biggest gripes with the original Reactoonz slots was that they were just too damn confusing! Don't get us wrong, this game still requires a little light-reading ahead of gameplay, but it's 100% an improvement on the latter two slots.

It's genuinely so much more fun to play, just because it's easier to understand... Simple is good!

The fact that the win potential has shot up from an uninspiring 5,083x to a very healthy 22,000x is a massive upgrade and we're well impressed with that... Good job Play'n GO!

Play Dr. Toonz now at the following verified UK slots sites. These slot sites are fully licenced and have been thoroughly vetted and reviewed by us to ensure they offer a great user experience, are trustworthy, secure, and have a wide variety of the best online slots in their lobbies including Dr. Toonz:-

Enjoyed Dr. Toonz? Here's a handful of similar slots we think you'll like too. These online slots have been chosen based on features and themes similar to Dr. Toonz. You might also want to check out other Play'n GO slots.