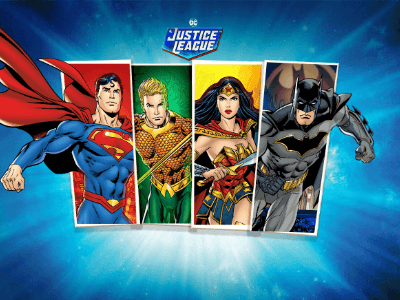 “ The bonus features make this one of the most superb DC slots yet! ”

Jump straight into the action and play DC Justice League Comic now at the following fully licenced UK slot sites. These slot sites have been thoroughly audited and reviewed by the team here at Slot Gods to ensure they offer an exceptional user experience, are trustworthy, safe, secure, and boast the best selection of online slots in their portfolio including DC Justice League Comic...

The first three game reels will be replaced with one giant reel featuring a 3x3 mega symbol, the reels will spin and stop on matching symbols (that can either be a low-value symbol, high-value symbol or wild.

When players land 3 bonus symbols on the reels they may turn into moving wilds symbols, triggering the Moving Wilds bonus feature.

The shifting wild symbols will shift one position to the left whilst the reels respin and a win multiplier increases to 2x. The next respin sees the moving wilds shift once more an the multiplier increase to 3x. The final respin will see players receive a 5x multiplier as the last wild moves off the reels.

The coin respin feature ends after all positions are filled or there's a spin that does not feature a win of some sort. At the end of the bonus feature the coin wins are added together and multiplied by all of the multipliers in view.

DC Justice League Comic is part of the networked DC Super Heroes Jackpot. Players can trigger one of four jackpots with any spin of the reels. The higher the bet, the greater the chances of winning the jackpot game.

In order to win one of the four jackpots players must collect a certain number of coloured jackpot symbols.

Shifting wilds will show up on the reels and will move left with every respin. During these respins a multiplier will climb up from 2x to 3x and finally 5x.

Random symbols may turn into coin win symbols or a 2x win multiplier symbol. The rest of the symbols will respin and land more of these special symbols. The feature ends when no win is triggered.

If players land 3, 4 or 5 scatter symbols they'll trigger 10, 15 or 20 free spins respectively with win multipliers on top. This feature can be re-triggered by landing 2 or 3 more scatter symbols.

Players can trigger a four-tiered progressive DC Super Heroes Jackpot on any spin of the game reels. The higher the player's stake, the higher their chances of winning a progressive jackpot are.

Players can benefit from a number of exciting bonus features and mechanics such as moving wilds, coin respins, mystery bonus symbols and free spins! In addition to this, this superhero-themed slot is part of the DC Super Heroes Jackpot, a networked progressive jackpot.

In terms of design DC Justice League Comic is okay, however, we weren't blown away if we're being completely honest. Comic book themed slots have a lot of scope for creative design and we feel like Playtech maybe didn't take the bull by the horns... When it comes to this game we think it's fair to say that symbols look fantastic, but everything else is a bit dull.

Low paying symbols are your standard J, Q, K, A whilst high paying symbols are your DC heroes Aquaman, Batman, Wonder Woman and Superman. Special symbols include an exploding planet as the wild, and the justice league logo as the scatter. There are three different bonus feature symbols, these are villains The Joker, Darkseid and Cheetah.

In terms of sound, we were really disappointed, there's no soundtrack so to speak... Just sounds whenever high-value symbols land and wins are formed.

This slot is incredibly simple to navigate! An action bar runs along the bottom of the game screen... From left to right there's an info button that brings up the paytable and bonus information, a bet selection tool, an autoplay button (that allows players to set up to 100 automated spins) and of course the spin button.

This medium volatility slot has an RTP of 96.72% and offers players the opportunity to win 10,000x their stake which is pretty inviting! There are no complaints from us on the win potential front.

DC Justice League Comic is genuinely one of the better games in the DC Super Heroes series, especially when it comes to bonus features and mechanics. But ultimately we still think it's a just little bit average when it comes to everything else. Worth a play though!

Play DC Justice League Comic now at the following verified UK slots sites. These slot sites are fully licenced and have been thoroughly vetted and reviewed by us to ensure they offer a great user experience, are trustworthy, secure, and have a wide variety of the best online slots in their lobbies including DC Justice League Comic:-