Charlie Chance in Hell to Pay

Charlie Chance in Hell to Pay is a beautifully designed 3-reel, 5 payline slot that's designed to look like a vintage 1920s cartoon. The game utilises two main bonus features: Multiplied wilds and a feature board that can see players trigger one of five unique outcomes including instant cash prizes and free spins.

Jump straight into the action and play Charlie Chance in Hell to Pay now at the following fully licenced UK slot sites. These slot sites have been thoroughly audited and reviewed by the team here at Slot Gods to ensure they offer an exceptional user experience, are trustworthy, safe, secure, and boast the best selection of online slots in their portfolio including Charlie Chance in Hell to Pay...

First and foremost, wilds are the feature you should be most aware of because they’re of vital importance in Charlie Chance! Aside from the standard wild symbol, there are also a 2x wild and a 3x wild that can come into play. You can land wild multipliers on all three reels, meaning if you got three 3x multipliers they would combine to make 27x (rather than 9x).

Whenever three scatter symbols (which is the face of the female demon) appear anywhere on all of the reels the Feature Board bonus kicks in and Charlie starts hopping along stepping stones which are bursting into flames behind him. Each stepping stone has a different bonus atop it, wherever Charlie decides to stop determines what bonus the player will receive out of the following:

The player is credited with a random instant prize.

The player is awarded a single re-spin with a random multiplier (either x2, x3 or x25) attached.

The player is awarded a single re-spin with up 9 random wilds added to the reels.

The middle reel becomes wild and the third reel nudges until a win is registered.

The player is awarded 8 free spins. During the free spins round players can again collect three scatter symbols and re-trigger the feature board, offering all the above bonuses once more. 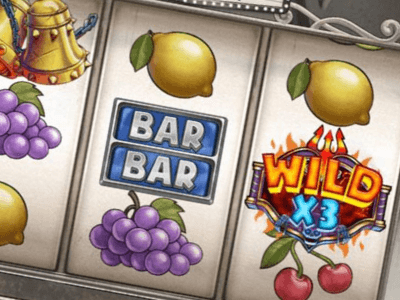 The base game features multiplied wild symbols (2x and 3x). If these land on the reels they'll multiply your winnings at the end of a successful spin. Multipliers are multiplied by each other rather than added together as well! 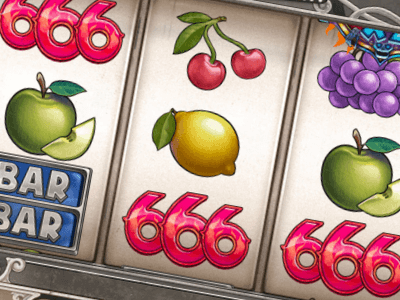 When three demon scatter symbols land on the reels a Feature Board mini-game will launch that sees Charlie hop along stepping stones before stopping on a random modifier, potentially launching a free spins round.

Charlie Chance in Hell to Pay is a truly charming 3-reel, 6 payline slot that gives off a wonderful old-school vibe whilst still retaining a number of exciting bonus features and mechanics that make it feel modern and innovative at the very same time.

This is undoubtedly one of our favourite online slot releases of 2020, purely because of its unique aesthetic that you just don’t see with modern online slots.

The game is designed to look like an old black and white 1920s cartoon inspired by the fictional character Charlie Chan, who starred in mystery novels and films during the same era. Uniquely, the game isn’t set in Honolulu like the original these, but instead is set in the fiery depths of Hell!

The game is set up like a classic fruit machine, featuring all the symbols you’d expect to find from one back in the day, these include (from low to high): cherries, lemons, apples, grapes, bar symbols, 666 symbols, some ominous looking bells and a wild symbol.

On one side of the monochrome reels is a very worried looking Charlie Chance, whilst on the other hand is a floating female demon holding a pitchfork. Behind the reels in the chasm’s of hell are the outlines of other demons dancing away.

Playing this game couldn’t be simpler… There’s not much players need to other than set their stake and hit spin! If you’re feeling lazy there’s always an auto-bet feature, if you’re feeling impatient then you can use the turbo feature that sees spin times cut down significantly.

This slot has a pretty average betting range, with players able to bet between £0.10 all the way through to £100. So regardless of whether you like to play it safe or flex your betting muscles and wager large amounts then you should be pretty happy with what you’re getting here.

Charlie Chance in Hell to Pay is a medium volatility slot with a fair RTP of 96.23%. The opportunity to land three 3x multipliers, meaning players receive 27x their overall stake is a huge win in our books… On top of this, the max payout is an impressive 6,666x which is an even bigger win! Reaching such heights is a tall order… But the opportunity is still there!

We won’t lie, Charlie Chance in Hell to Pay is an absolutely bizarre online slot… But we absolutely love its unique and quirky nature. If you’re after a low key three-reel slot that still offers players an impressive number of bonus features then this game is for you.