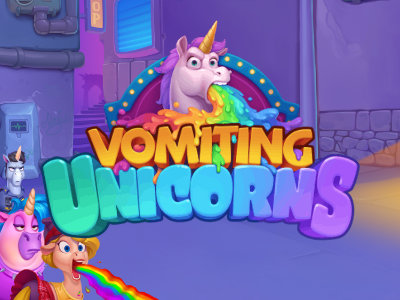 Vomiting Unicorns is a truly gross 5-reel, 30 payline slot developed by G Gaming, a slot studio that's part of the Yggdrasil YGS Masters programme. This bizarre game sees players attempt to meet the needs of drunk unicorns by getting them their desired fast food after a wild night on the town. If you manage to match up a symbol to a Unicorn's wish then they'll eat the fast food and then vomit onto the reel, covering it in one large expanding rainbow wild.

“ This gross slot is truly memorable, sadly it falls short on features ”

We'll be honest, Vomiting Unicorns isn't filled to the brim with bonus features, however, the features this slot does (the Wish Feature and Jackpot Spin) are lucrative and memorable enough to make up for the fact this game has no free spins feature.

At the start of every spin a Unicorn above the reels will reveal what fast food they'd like to eat in a thought bubble. If players manage to land the food that appears in their wish then the unicorn will eat it before promptly vomiting down the reel. This automatically transforms the reel into an expanding rainbow wild symbol.

In addition to this, a light will come on above the unicorn's head. If all 5 lights are lit then the Jackpot Spin feature will activate.

Each multiplier is represented by a differing colour light, the lights sequence will begin and stop at a random light, awarding players the associated prize. 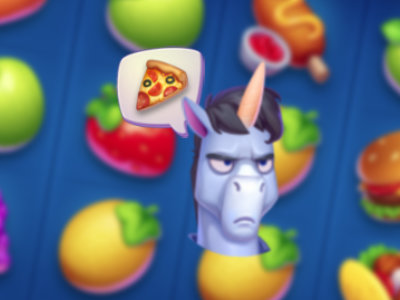 On every spin, unicorns will have a thought bubble above their head showing which fast food they want to eat. If you land that food on their reel they'll eat it, promptly vomiting, turning the reel into an expanded rainbow wild. 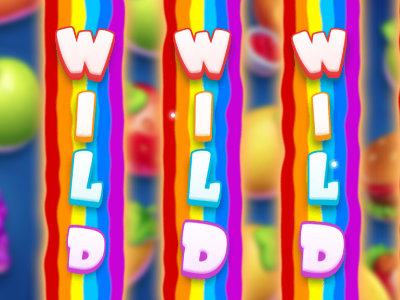 If players manage to make all five unicorns vomit this will trigger the Jackpot Spins feature which sees players win a bet multiplier that's somewhere between 250x and 10,000x their stake.

Vomiting Unicorns is a truly bizarre 5-reel, 30 payline slot developed by G Gaming, a London-based studio that's part of the Yggdrasil YGS Masters programme. This stomach-turning slot features two main bonus features and mechanics... The Wish Feature that sees players feed unicorns fast food in order to make them vomit onto a reel, turning it into an expanded rainbow wild. In addition to this, there's a Jackpot Spin feature that can see player's win up to 10,000x their stake.

This slot looks absolutely fantastic, the slot is designed to look like the entrance to a local pub. Every so often a different unicorn will stumble out of the door, drunk and hungry for fast food! Above each game reel is an animated portrait for each unicorn. These include a cop unicorn, a female goth unicorn, an angry punk unicorn, a hillbilly unicorn and a rollerskating unicorn.

Low paying symbols in Vomiting Unicorns are healthy foods, a carrot, lemon, strawberry, grapes and an apple. High paying symbols are the one's everyone really wants... These include a corndog, taco, fried chicken and chips, pizza and a burger. The game's special symbol is a box of tasty noodles!

Vomiting Unicorns is straightforward, keep an eye on the unicorn portraits above the reels and hope that one of the symbols that lands on the reel below them matches up with the food that appears in their thought bubble. Making them sick is the aim, as it turns reels into expanded rainbow wilds.

In terms of navigating and playing the slot in general, this game has everything important along the bottom of the game reels including spin speed, stake selection, spin and autospin. The spin speed button offers players three different speeds (normal, turbo and super) as opposed to just normal spin or turbo spin, something we really like!

This medium volatility slot can see players win a maximum of 10,000x their stake, which is pretty generous. The only letdown is that Vomiting Unicorns has a below-average RTP of 95.70%. The lack of any free spins feature is jarring, but the Wish Feature does go some way towards making up for that, as it triggers very frequently.

Vomiting Unicorns is a wonderfully quirky slot that could have been up there amongst some of our favourite online slots, and perhaps one of the best WTF themed slots on the site... All it's lacking is a decent RTP and perhaps a couple more bonus features and mechanics, It's a little bit frustrating how close this game comes to being a branded a classic, perhaps if a Vomiting Unicorns 2 came about it would fix the problems this slot has.

Play Vomiting Unicorns now at the following verified online slot sites. These slot sites have been thoroughly audited and reviewed by us to ensure they offer an exceptional user experience, are trustworthy, safe, secure, and boast the best variation of online slots in their portfolio including Vomiting Unicorns:-

Enjoyed Vomiting Unicorns? Here's a handful of similar slots we think you'll like too. These online slots have been chosen based on features and themes similar to Vomiting Unicorns. You might also want to check out other G Gaming slots.