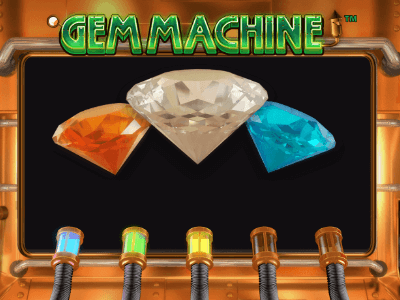 The Gem Machine is a steampunk-inspired slot filled with gems and jackpots to keep players entertained. Developed by SG Digital, The Gem Machine plays on 5-reels with no set paylines. Players will instead decide on the reels and win base on which symbols they roll rather than matching paylines.

There are 5 different fixed jackpots with a potential prize of 1,000x your stake by landing the Grand jackpot. There are even free spins up for grabs in this slot that can be retriggered.

Jump straight into the action and play The Gem Machine now at the following fully licenced UK slot sites. These slot sites have been thoroughly audited and reviewed by the team here at Slot Gods to ensure they offer an exceptional user experience, are trustworthy, safe, secure, and boast the best selection of online slots in their portfolio including The Gem Machine...

The Gem Machine is unsurprisingly all about gems. Each gem symbol in the game can award one of three multipliers.

Whilst this slot begins with 5-reels, players can choose how many reels they want to spin and bet on. It can be between 1 to 5 reels and can be changed by clicking the buttons above the reels.

Amazingly, there are 5 different jackpots up for grabs in this slot and all you have to do is land the jackpot. It starts with the Mini, Minor and Major as the smaller ones but the Mega and Grand ones are the ones to look out for.

It's not very often that you find a slot where you can decide which reels you want to play on, but that's not the case with The Gem Machine. Developed by SG Digital, this steampunk slot plays on 5-reels, to begin with, but players have the option to choose how many reels they actually want to play on. They don't have to stick to 5-reels and can play on 1 if they'd like.

There aren't any typical paylines with this slot as the payouts decide which gems land on the reels. The Gem Machine is definitely a unique slot that shakes up the typical slot format and if that's something that interests you - be sure to read on.

As previously mentioned, the genre of this slot is leaning towards steampunk. The background has different rustic machines and cogs moving with the reels looking straight out of a steampunk film. With colours such as gold and copper mixed with the brightness of the liquid canisters, the slot definitely stands out. It feels like a perfect fit for the intended aesthetic.

During spins of the reels, you can hear cogs spinning and other mechanical sounds. In-between spins, there is a soft cello beat played in the background. As you spin and win, this score increases to make something a little more exciting. Overall, the music seems whimsical and full of wonder - which is exactly what you want in a slot like this.

This slot is unusual for being able to decide on how many reels you want to play on. If you want to play on all 5-reels you can, or instead, just use 1. That being said, the gameplay is straightforward and incredibly easy - anyone can pick up and play this slot.

You can select how many reels you want to play on by selecting one of the buttons on the top of the reels. The bottom of the reels contains all the menus that you need including bet level, spin and the autospin button.

Changing the reels affects the RTP - if you keep all the reels on, then the RTP is 97%. Using just reel 1 lowers the RTP by 95%. Obviously, still at 95%, the RTP is fantastic and players should take advantage of this.

The maximum payout for this slot is 1,000x your stake and this can be achieved by landing the Grand jackpot or the yellow gem worth up to 1,000x your stake. As there are no multipliers or anything else, this is the most you can get. For a high volatility slot, this isn't the most appealing win.

On the surface, this slot is cool and a truly interesting take on modern online slots. The changeable reels and the lack of a payline is a unique concept that you'll either hate or love. Naturally, the same can be said about the steampunk theme.

The Gem Machine could've almost been iconic but the lack of a high payout is a huge letdown. Now, the RTP is fantastic at a maximum of 97% - but 1,000x your stake isn't enough for a high volatility slot.

If 1,000x your stake is a decent amount for you and you want to try out this fascinating slot, then make sure to check out The Gem Machine.

Play The Gem Machine now at the following verified UK slots sites. These slot sites are fully licenced and have been thoroughly vetted and reviewed by us to ensure they offer a great user experience, are trustworthy, secure, and have a wide variety of the best online slots in their lobbies including The Gem Machine:-

Enjoyed The Gem Machine? Here's a handful of similar slots we think you'll like too. These online slots have been chosen based on features and themes similar to The Gem Machine. You might also want to check out other SG Digital slots.