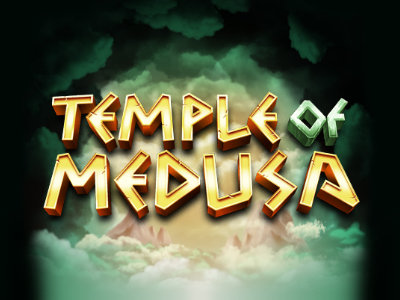 Known throughout history as one of the most famous monsters for her beauty and deadliness, Medusa is an icon. Microgaming agreed as they released a slot all about her.

Temple of Medusa plays on 5-reels with 25 paylines and a maximum win of 5,000x your stake. With Spreading Wilds and Free Spins, you'll be winning big in no time.

“ A classical slot showing that sometimes the oldies are the best ”

Jump straight into the action and play Temple of Medusa now at the following fully licenced UK slot sites. These slot sites have been thoroughly audited and reviewed by the team here at Slot Gods to ensure they offer an exceptional user experience, are trustworthy, safe, secure, and boast the best selection of online slots in their portfolio including Temple of Medusa...

Temple of Medusa features wilds - but not your average wilds. They can spread to neighbouring symbols and even turn them wild. Whether it's horizontally, vertically or diagonally, no symbol is safe around the wild.

5 free spins with wilds spreading in all directions.

Mystery free spins (5 to 15) with wilds that expand in a random direction.

Aside from these two features, you can randomly trigger a win of 5,000x your stake at any moment throughout the base gameplay.

The Medusa wild can spread across the reels and turn neighbouring symbols wild! They can spread in 1 direction, 2 directions or in all directions during a spin.

Landing 3 scatters will trigger the free spins selection and you get to choose 1 of the 4 free spin features. These free spins can even be retriggered.

As one of the most famous monsters in Greek mythology, Medusa is known throughout history. Unlike the other Gorgons, she is presented as someone with beauty and she was one of the only mortal Gorgons.

With mythical slots being incredibly popular, Microgaming decided to focus on Medusa and give her the spotlight. Temple of Medusa is a high volatility slot that plays on 5-reels with 25 paylines. With Free Spins and Spreading Wilds, you'll be winning the big payout of 5,000x in no time.

Surrounded by green eerie mist, the reels are set in the temple that Medusa was trapped in by Athena. There are various broken statutes and pillars to signify that this temple is in ruins.

On the reels, there are two snakes slithering with the symbols on the reels being related to the Greek myth of Medusa. The symbols even include weapons and equipment worn by the legendary hero, Perseus, who ended up slaying Medusa. There is definitely full attention to detail in this slot and shows that Microgaming really studied the myth before designing the slot.

In-between spins, you'll notice drum beats mixed with footsteps to create an intense atmosphere. As you spin, this music intensifies with chorus music and chanting. When you land wins, you'll notice the paylines hiss which is just a little touch showing the effort Microgaming put into this slot.

The gameplay is traditional with 5-reels and 25 paylines - meaning that it's straightforward to play. Anyone can pick up and play this slot without any hassle.

Players can find all relevant menus to the right of the reels. The spin button is centred with the autospin and bet level just below it. A further menu button can be found above with the paytable and other settings such as sound in this section.

Temple of Medusa has a high RTP of 96.40% which is above the average standard. The maximum win in this slot comes randomly through the slot awarding players up to 5,000x their stake through the Lucky Prize. Other than that, you can win only 625x your stake by filling the reels with wilds.

Perhaps the only downside has to be the low payout of 5,000x your stake. It's not entirely disappointing but it's definitely lower than what you'd expect from a modern online slot.

Don't let that fully put you off as the design and gameplay are solid enough to provide some entertainment. If you love mythical slots, then definitely give Temple of Medusa a spin. For those of you wanting something a little bigger, look at the Age of the Gods series with one of the best progressive jackpots out there.

Play Temple of Medusa now at the following verified UK slots sites. These slot sites are fully licenced and have been thoroughly vetted and reviewed by us to ensure they offer a great user experience, are trustworthy, secure, and have a wide variety of the best online slots in their lobbies including Temple of Medusa:-

Enjoyed Temple of Medusa? Here's a handful of similar slots we think you'll like too. These online slots have been chosen based on features and themes similar to Temple of Medusa. You might also want to check out other Microgaming slots.