Slingo Rainbow Riches is not your ordinary online slot game. This classic Barcrest title combines bingo and an online slot to make for what is one incredibly fun online casino experience! If you like the thrill of Rainbow Riches bonus features and the excitement of marking off numbers on your bingo card then settle yourself what is going to be the PERFECT game for you.

Jump straight into the action and play Slingo Rainbow Riches now at the following fully licenced UK slot sites. These slot sites have been thoroughly audited and reviewed by the team here at Slot Gods to ensure they offer an exceptional user experience, are trustworthy, safe, secure, and boast the best selection of online slots in their portfolio including Slingo Rainbow Riches...

Rainbow Riches has 7 fantastic bonus features that can be triggered when they mark off enough lines on the 5x5 game grid. The more lines players mark off, the better the bonus feature! All of these features have been pulled from original Rainbow Riches slot games, so you may recognise these games from previous entries in the Rainbow Riches series. 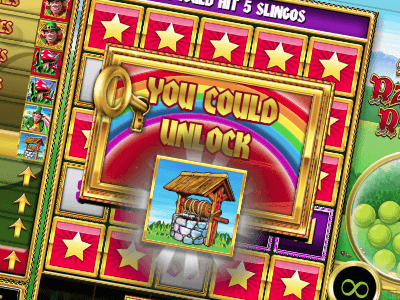 If players mark off 5 lines they'll play a Wishing Well pick and click mini-game in which they can reveal a special prize. 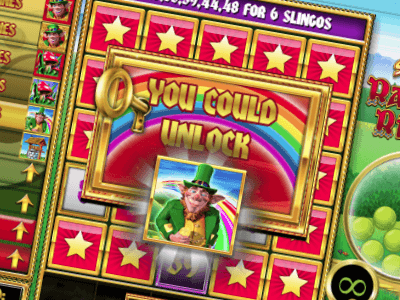 If players mark off 6 lines 50 coins will spin and will reveal multipliers when they stop. A coin is then flipped which decides whether players take a prize or spin again. 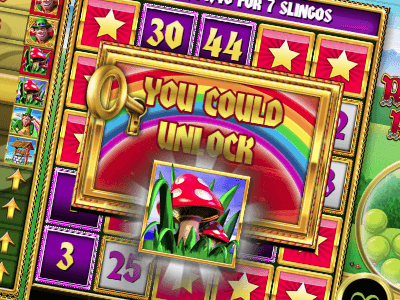 If players mark off 7 lines they'll play the Magic Toadstool pick and click mini-game in which they pick 3 toadstools to reveal lucrative multipliers. 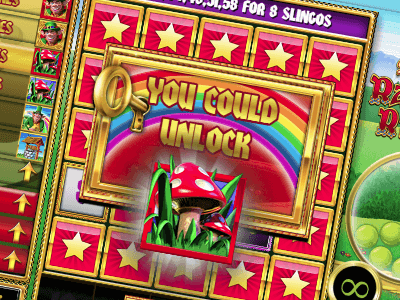 If players mark off 8 lines they'll trigger Magic Toadstool Red. This is the same as the Magic Toadstool feature except players get to pick 4 toadstools instead of just 3. 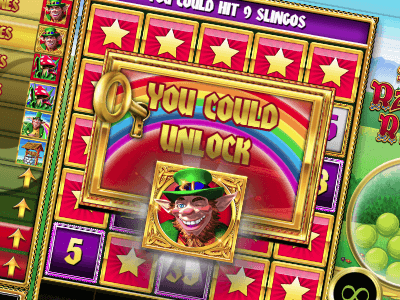 If players mark off 9 lines they'll trigger Road to Riches. Players spin a wheel of fortune that moves them between 1 and 6 places along a golden road, whenever they wheel lands on COLLECT players take whatever prize they're currently on. 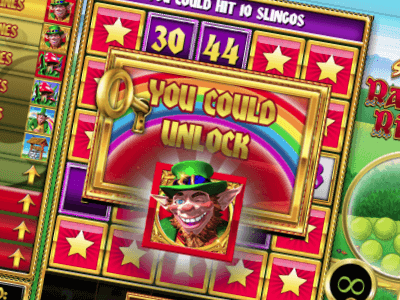 If players mark off 10 lines they'll trigger Road to Riches Red. This is the same as Road to Riches except all of the prizes along the road are doubled! 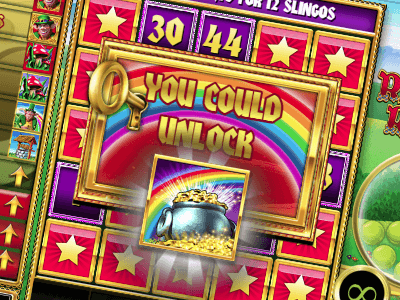 If players manage to get a full house they'll trigger Pots of Gold! This sees players receive one of three pots (bronze, silver and gold) behind the pot they receive is a multiplier that can be as high as 1000x.

This Slingo game sees players spin a single slot reel to reveal a set of numbers, if these numbers match yours on a 5x5 grid you're in luck! Start marking off winning lines (also known as Slingos) then you'll begin to rake in the cash prizes, strike out five or more lines and you'll trigger one of six classic (and highly lucrative) Rainbow Riches bonus features!

Despite not being your conventional slot title, Slingo Rainbow Riches looks exactly what you'd expect a game in this iconic series to look like. Behind the game grid there are lush rolling hills covered in toadstools and vibrant flowers, a golden paved road runs through them far into the distance, the only thing missing truly missing here is a rainbow at the end of that road.

There aren't too unique game symbols to keep an eye out for other than the numbers themselves, a joker, a devil and the free spins image. Each of the game's bonus mini-games has a small square image next to them that you might recognise from other Rainbow Riches slots on the paytable to the left of the reels as well.

In terms of sound, what else would you expect from a Rainbow Riches slot other than a very cheerful and upbeat Irish tune!

There's a lot to take in when you load Slingo Rainbow Riches, it's easy to feel a little bit overwhelmed, but don't let that put you off, we'll explain everything you need to know right here!

Players set a single stake at the start of the game, marking off lines on a 5x5 bingo-style grid by spinning a single slot reel 10 times, matching numbers on the reel to the game grid. It really is that simple!

In order to win any money players must trigger and play one of the classic Rainbow Riches bonus games by striking off 5 or more lines on the game grid. Players progress is displayed on a paytable on the left-hand side of the reels. The more lines that are struck off, the better and more lucrative the bonus feature is.

If you finish a game and you have just missed out on triggering a bonus feature you'll be able to pay for extra spins at the end of the game, the price depends on your original stake and how many numbers away you were from triggering the bonus. It can get a little bit pricey, but sometimes it's worth taking that extra risk in order to pick up some big wins!

This medium volatility bingo/slot hybrid has an RTP of 95.6% which is a little lower than expected and has been known to give players a fighting chance of winning a maximum of £225,068, which is pretty damn tasty if you ask us.

Honestly, this isn't your stereotypical slot so you'd think we'd be a bit apprehensive about it... But the truth is, we really enjoyed playing Slingo Rainbow Riches! Some of you might be thinking, 'if you wanted to play a bingo game then why not just play bingo?' But this game isn't just bingo. Barcrest has truly done a wonderful job in combining bingo and slots and we're all about that! If you fancy something truly different please give Slingo Rainbow Riches a go!

Play Slingo Rainbow Riches now at the following verified UK slots sites. These slot sites are fully licenced and have been thoroughly vetted and reviewed by us to ensure they offer a great user experience, are trustworthy, secure, and have a wide variety of the best online slots in their lobbies including Slingo Rainbow Riches:-