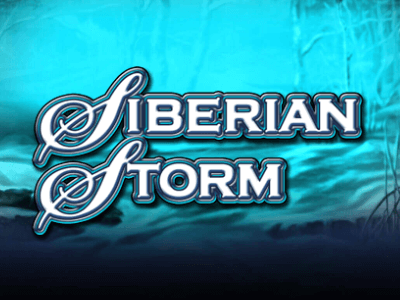 Originally created for land-based casinos, IGT’s Siberian Storm finally moved to online slots in 2011 and has been a cult classic ever since. Playing on 5-reels with 720 ways to win, Siberian Storm was revolutionary when it released.

Amazingly, players can reportedly win up to 240 free spins in total - which is absolutely mindboggling. On top of that, there is MultiWay Xtra which means that wins can be left or right!

Despite being released in 2011, many modern online slot staples are available within Siberian Storm. There is a wild that appears on reels 2, 3 and 4 and substitutes for all symbols except the scatter and eye symbols. Amazingly, players can trigger up to 240 free spins in total due to retriggers.

There are 720 ways to win in this slot, and it pays both ways with the MultiWay Xtra feature. The wins are multiplied by the coin value.

Landing the eye symbol on 5 consecutive reels triggers the free spins bonus with 8 spins. If players manage to land more than one combination that triggers free spins, they can win up to 96 free spins initially.

Siberian Storm is an animal slot that was originally released at a land-based casino. In 2011, the slot made its debut online and it’s been a cult classic ever since. Developed industry giants IGT, Siberian Storm plays on 5-reels with 720 ways to win thanks to the MultiWay Xtra feature.

It may not have much going for it in terms of features, but it has an impressive free spins round. Players can earn up to 96 spins initially, but can retrigger up to 240!

Set against the snowy backdrop of Siberia, the background of the reels is an ice paradise. It’s covered in snow and looks like a fairy tale. The reels themselves have icicles all around them with a statue of a tiger at the top of the reels. During the free spins round, the background changes to a more melted one as the sun finally begins to rise.

As expected from a slot released in 2011, the designs on the reels look a little outdated and look quite tacky compared to modern standards. Similarly with the music being played throughout spins. It sounds like generic animal-inspired music but doesn’t deliver any significant impact. Overall, the design is extremely outdated and it’s hard to understand if it was accepted in 2011.

Whilst the slot boasts of the MultiWay Xtra feature with 720 paylines, the gameplay is as simple as they come. For 2011, it’s impressive but compared to the giant Megaways engine, this slot may struggle to find an audience.

Like in most other IGT slots, all the menus can be found at the bottom with the spin button in the middle. Autospins can be set 10 and 50 with a bet level starting at 50.00.

Different sources across the internet state varied amounts for the maximum win but we could not find a consistent one. During the main game, you can win up to 1,000x your stake by landing 5 of the Siberian storm symbols.

The manual of the slot states that the RTP is between 92.52% and 96% - which is quite varied. Therefore, it can’t be determined whether or not you’ll get a good RTP or a terrible one.

In all honesty, we were not sure what to make of this slot as it’s definitely a slot from a bygone age. The concept of the slot is interesting with the MultiWay Xtra feature and it was obviously legendary during release, but the lack of other innovative features is a complete letdown.

There are no multipliers, sticky wilds or any sort of respin feature to keep players engaged. Amazingly, you can win up to 240 free spins - but that’s all this slot has going for it! There is not even a huge jackpot attached to it.

If you love older slots and want to feel nostalgic, then definitely give this slot a go. For those of you wanting a more interesting animal slot, try out Mega Moolah or Serengeti Gold.

Play Siberian Storm now at the following verified online slot sites. These slot sites have been thoroughly audited and reviewed by us to ensure they offer an exceptional user experience, are trustworthy, safe, secure, and boast the best variation of online slots in their portfolio including Siberian Storm:-

Enjoyed Siberian Storm? Here's a handful of similar slots we think you'll like too. These online slots have been chosen based on features and themes similar to Siberian Storm. You might also want to check out other IGT slots.