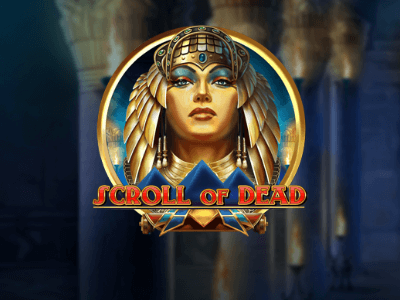 After the success of Legacy of Dead, Play'n GO decided to release a sequel called Scroll of Dead. Playing on 5-reels with 10 paylines, Scroll of Dead returns to Egypt to unlock even more fortunes.

With Free Spins and Expanding Symbols, you'll be looking at the glorious treasure in no time. You could even win up to 7,500x your stake!

“ A modern and refreshing take on a tired genre ”

Aside from free spins, you'll find Expanding Symbols during the gameplay in free spins. The symbols expand at randomly chosen moments for even bigger wins!

As soon as free spins begin, a special expanding symbol is chosen at random to help you win more on free spins. It expands to cover the reels for even more wins.

After the success of Legacy of Dead, Play'n GO decided that it was time for a sequel and thus Scroll of Dead was born. Journey back to ancient Egypt for an even better chance to win with Free Spins and Expanding Symbols.

There's no denying that Egyptian slots are overused and tired - but Play'n GO completely shakes up the genre with beautifully designed slots with innovative gameplay. Whilst the 5-reel, 10 paylines aspects of the slot may not be revolutionary, Scroll of Dead is definitely a classic slot with modern twists thrown into the mix.

From the offset, it's clear that the design team put a lot of effort into this slot. The slot opens with the interior of a temple with so much design and detail thrown in. From the pillars crafted with hieroglyphics to the markings on the floor, there's so much attention to detail and it looks incredible.

Now the symbols are intricately designed and look semi-realistic but with the series' style thrown in. Cleopatra and the other Egyptian symbols literally glow and gleam with decadence that you can't help but appreciate the artwork. They even animate once you obtain them in winning paylines and it's definitely appreciated.

Of course, there's cliche Egyptian music playing in the background with guitars and other stringed instruments played to create atmosphere and build suspense - but it's subtle enough to be enjoyable.

The core gameplay consists of spinning the 5-reels and hitting one of the ten paylines. Of course, the reels expand to 6 during the free spins round but that's about it.

Like in most Play'n GO slots, you can find the menus all at the bottom of the screen with spin, autospin and bet level to the far right.

After the abysmal RTP in the original slot, Play'n GO definitely turned up the charm with 96.28% - which is brilliant. The maximum win throughout this slot is 7,500x your stake win can be won through landing 6 of the Cleopatra symbols on the reels.

It's clear from the start that Scroll of Dead looks fantastic almost like a Hollywood movie with the amount of detail on the slot. Now, the gameplay isn't anything special but it delivers exactly what it intends to do.

The biggest improvement to this slot from the first game has to be the improved win potential of 96.28% with a maximum win of 7,500x your stake. This isn't the best win potential ever but it helps to seal Scroll of Dead as one of the best Egyptian slots we've seen in recent years. It doesn't reinvent the genre, just makes it accessible for modern audiences. Therefore, we recommend giving this slot a spin if you love Egyptian slots.

Play Scroll of Dead now at the following verified online slot sites. These slot sites have been thoroughly audited and reviewed by us to ensure they offer an exceptional user experience, are trustworthy, safe, secure, and boast the best variation of online slots in their portfolio including Scroll of Dead:-

Enjoyed Scroll of Dead? Here's a handful of similar slots we think you'll like too. These online slots have been chosen based on features and themes similar to Scroll of Dead. You might also want to check out other Play'n GO slots.