Raging Rhino Ultra is a 6-reel, 4,096 ways to win slot developed by WMS. This safari themed slot can see players win up to 50 free spins with a bet multiplier on top of that! What's more, this sensational slot is also part of the Mega Drop networked progressive jackpot, meaning that players can win one of three jackpots on any spin of the reels!

“ This slot boasts a great free spins bonus and jackpots, but still feels like it's lacking ”

Jump straight into the action and play Raging Rhino Ultra now at the following fully licenced UK slot sites. These slot sites have been thoroughly audited and reviewed by the team here at Slot Gods to ensure they offer an exceptional user experience, are trustworthy, safe, secure, and boast the best selection of online slots in their portfolio including Raging Rhino Ultra...

Raging Rhinos Ultra is actually pretty generous in terms of bonus features, despite the fact there's nothing truly game-changing in this title.

Firstly we have a free spins bonus. If players land 3, 4, 5 or 6 diamond scatter symbols during base gameplay then they'll be awarded 8, 15, 20 or 50 free spins respectively. During this bonus feature, wild symbols will come bundled with additional multipliers that multiply payouts by 2x or 3x.

it's also worth noting that a total bet multiplier will also be awarded for landing the diamonds on the reels in the first place, these are as follows:

The other main feature associated with Raging Rhinos Ultra is the Ultra Jackpot. This sees players in with the chance of winning three major progressive jackpots, the Minor, Major and Epic jackpot. These can be triggered with any spin of the reels, however, they are capped as follows: 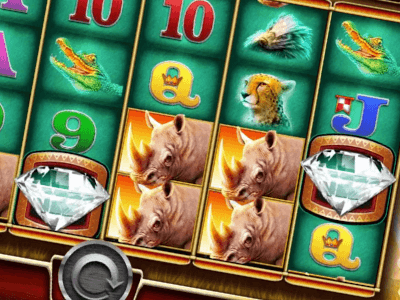 When diamond scatter symbols land upon the reels players can trigger up to 50 free spins with an additional win of up to 1,000x their initial stake. 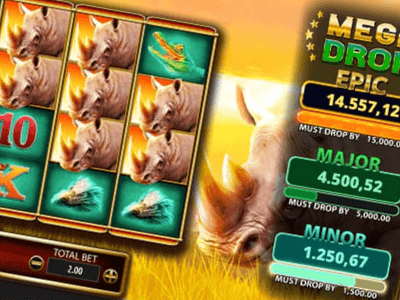 Players can trigger one of three lucrative progressive jackpots (Minor, Major and Epic) that can range anywhere from £1,500 to £15,000.

Raging Rhino Ultra is a 6-reel, 4,069 payline slot that pays any ways and is filled to the brim with exciting bonus features and mechanics that can seriously boost your bankroll.

Raging Rhino Ultra is played on a very narrow set of reels that feature a range of fierce animals as symbols. Behind the reels, as one would expect is the African Savanna (tropical grasslands, where animals graze in the hot sun), to the right of the reels is an imposing rhino that watches intently as the game spins away.

Low-paying symbols are your standard 9, 10, J, Q, K, A whilst high-paying symbols are as follows: An eagle, crocodile, jaguar, gorilla and of course a raging rhino! There are two special symbols, the wild is a golden savanna landscape whilst the scatter symbol is a huge diamond.

Raging Rhino Ultra is played on 6 narrow reels that allow for four symbols each on them at any given time. Below the reels is an action bar that allows players to access the game's paytable, set a maximum of 100 automated spins and change their total bet. To the right of the game reels are the game's three progressive jackpot totals.

Raging Rhino Ultra has an incredibly impressive RTP for a progressive jackpot slot, we're pleasantly surprised to see that it sits at 96.20% which is better than most jackpot slots, which usually see their RTP significantly lowered.

In terms of maximum win potential, this game can see players win 4,166x their stake, which is alright considering there are three progressive jackpots to be won. Without that set of progressives, it would have been a totally different story and we'd have rated the win potential of Raging Rhino Ultra as distinctly average.

If we're completely honest, Raging Rhino Ultra is a pretty plain run-of-the-mill slot, it does boast a pretty impressive free spins bonus, and we'll never complain about a title with a progressive jackpot... But, that's all there really is to talk about! For a game with 'Ultra' in the title, we think we're owed just a little bit more! We just can't help but feel something is missing here.

Play Raging Rhino Ultra now at the following verified UK slots sites. These slot sites are fully licenced and have been thoroughly vetted and reviewed by us to ensure they offer a great user experience, are trustworthy, secure, and have a wide variety of the best online slots in their lobbies including Raging Rhino Ultra:-

Enjoyed Raging Rhino Ultra? Here's a handful of similar slots we think you'll like too. These online slots have been chosen based on features and themes similar to Raging Rhino Ultra. You might also want to check out other WMS slots.