Finally, there is a slot game for MMA fans, the fight-themed MMA Legends slot from NetGame takes you into the rewarding world of hand-to-hand combat. The sports slot puts you into the octagon with fictional fighters on the reels and plenty of rewarding symbols to land. Hit the bonus extras and you could enjoy some wins that pack a decent punch.

“ Perfect for those who want to get a kick out of their online slots. ”

The MMA Legends slot from NetGame Entertainment puts you in the centre of the action with some tough-knuckled fighters. The action-packed slot title will appeal to those who enjoy watching the UFC but this time they can take down some serious wins. The game has its fair share of extras including free spins, multipliers and more. Let’s take a look at what you can find amongst the reels in this fight-themed slot. 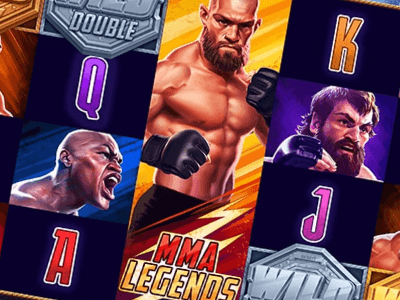 Land the MMA scatter symbol and you will be rewarded with 10 free spins. During the free rounds, wilds are sticky, if a new wild overlays the sticky wild, a 2x multiplier will be revealed and if it happens again, it will increase to 3x, and so on. 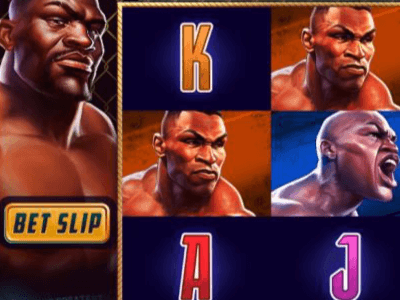 This innovative slot feature allows you to select an MMA fighter and place a bet on how many times you think they will appear on the reels before a certain number of spins take place. 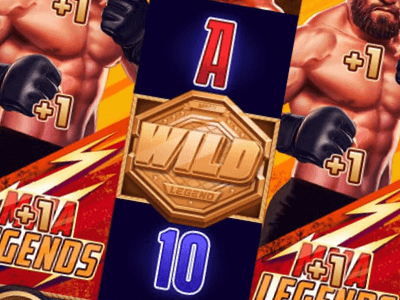 The wild substitutes for all symbols except the scatter and appears only on reels 2, 3, 4 and 5. 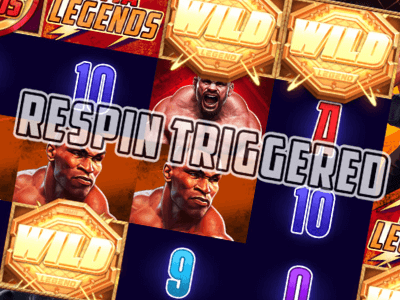 Land 4 wilds on the reels and the re-spins feature is triggered where wilds become staked and the feature could reveal more wilds for hefty rewards.

MMA Legends is a new slot from the guys at NetGame Entertainment. This slot puts you in the centre of the octagon where you will be fighting some scary MMA legends for some serious rewards. The game uses fictional MMA fighters, although you might recognise the characters as a hash-up of a few real-life MMA fighters. The game may not have the fighting reputation that many slots from top providers have but there is some good potential here.

The world of UFC and MMA has seen some rapid growth in popularity and now the sport is making its slots debut through the NetGame provider. The slot takes a simple approach to gameplay with 5 reels and 3 rows, you will also enjoy several decent features that pack a rewarding punch. Although the game isn’t the most graphically impressive or complete with innovative features, the slot itself is a lot of fun to spin and features some good action with every round.

Played across 5 reels and 4 rows, the MMA Legends slot is a more suitable slot choice for those with casual betting budgets. The game has a respectable payout potential with a top reward of £5,000 and a max betting limit of £30.

NetGame has put a lot of work into creating a visually impressive slot that justifies the action of MMA action on the slot reels. The game is both crisp in visual appearance and smooth in gameplay. The slot puts you amongst the crowd or in the octagon itself depending on your slot progress. The MMA fighters are the most dominant images on the reels, many of which look familiar, despite all being fictional.

The reel symbols include a number of tough-looking cage fighters, a championship belt and your standard numbers and letters. The game creates an exciting slot playing atmosphere through the crowds and an audio soundtrack that further immerses you into the mixed martial arts action.

When you hit a good-sized win or trigger a bonus feature you will enjoy some awesome animation that you will get a kick out of. Although it’s not the most creative slot game, it still does enough to deliver an enjoyable gaming environment.

You can expect some punchy gameplay in the MMA Legends slot. The game keeps it simple in terms of the controls, the 5-reel slot puts the controls beneath the reels. The spin control is bottom centre with the max bet control and balance to the right. You will find the coin value and bet amount to the left of the spin button. You can place bets between £0.30 and £30, making it a slot more suited to the everyday casino slot player.

You also have another button that takes you to the additional game settings, such as the auto spins, audio controls and the game information where you can get to know what each symbol on the reels is worth.

MMA Legends has a very respectable 96.03% return to player percentage, which is about average in the industry. The game offers a top prize payout of £5,000 which would be considered low amongst most slot games. However, the reels contain plenty of high paying symbols and some nice bonus features that can provide some hard-hitting payouts. The biggest rewards come during the free spins feature where you can take advantage of some extra wilds on the reels.

Although NetGame’s MMA Legends may not be one of the most popular slots and likely to be lost in many casino’s catalogue of games, it still has plenty of action to offer. The game has good graphics and some solid in-game features that can produce decent rewards. If you’re a fan of mixed martial arts and like to enjoy some casual slot action with simple gameplay then MMA Legends would be a perfect match up. The game has a unique sweepstake feature that stands out, but other than that it doesn’t have anything you haven’t seen before in a slot, well, maybe the MMA theme.

Enjoyed MMA Legends? Here's a handful of similar slots we think you'll like too. These online slots have been chosen based on features and themes similar to MMA Legends. You might also want to check out other Netgame slots.