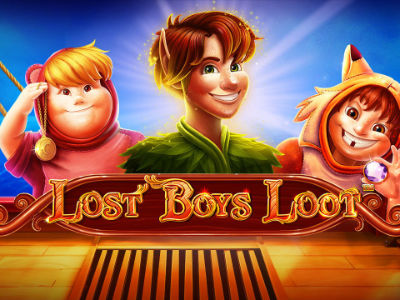 Prepare to sail on the high seas to join Peter Pan and the Lost Boys to take on Captain Hook in order to recover the lost loot. Developed by iSoftBet, this slot plays on 5-reels with 20 fixed paylines.

Lost Boys Loot features multiple free spins along with modifiers and bonuses to help you defeat Captain Hook once and for all.

“ A potentially perfect slot that disappoints with the maximum win ”

Like most online slots, Lost Boys Loot features wilds that can replace any other symbol except Pan and the Chest Bonus symbols. There are four different wilds in the game that include Tinkerbell, stacked Hook, Hook beaten and Hook normal.

On any spin, the Tick-Tock the Croc can appear beneath the reels and if you manage to land a Hook wild during this mode, then the Croc will jump out to chomp Hook. All the symbols beneath Hook will turn into wilds. Similarly, Tinkerbell can appear on any paid spin to turn 3 to 5 random symbols in wilds with her magic wand.

Aside from the wilds, you can trigger the Duelling Free Spins by landing 3 or more Pan symbols on the reels for 10 free spins. Landing 3, 4 or 5 Pan symbols will trigger 10, 20 or 30 free spins. If the stacked Hook appears during this bonus round with no Pan, then the multiplier increases by one each time.

Landing 3 or more Pans will retrigger additional spins will the potential to reach 30. Alternatively, if Pan and stacked Hook land on the reels, they will duel and you'll receive either more free spins or multipliers.

If you land a stacked Hook on reel 3, then you'll activate the Hook's Treasure Trap Free Spins which triggers a wheel to determine whether you receive 5, 8, 10 or 12 free spins. The stacked Hook will remain as a sticky wild and Hook will set off traps onto winning symbols to lock them in place as well.

Finally, if you land the Treasure Chest Bonus symbol on the reels, then you'll trigger the Lost Boys Bonus. This will reveal three chests and you decide on which one you want. Throughout this bonus, you can either win cash prizes or one of the free spins rounds. 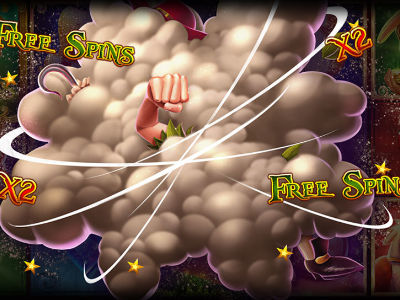 This is triggered by landing 3 or more Pan symbols and you can gain up to 30 free spins. Both Pan and stacked Hook have individual perks but they can also fight it out if you manage to land them together. 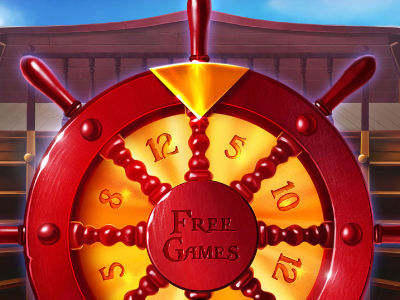 Landing a stacked Hook on reel 3 will trigger this mode which will deliver the player to a wheel to determine how many spins they'll receive. The stacked Hook acts as a sticky and sets off traps on winning symbols to lock them. 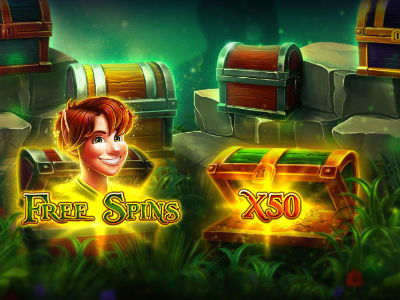 If you land the Treasure Chest Bonus symbol on the reels, then you'll trigger this feature which takes you to a pick and click mini-game. You decide on one of the chests to win either cash prizes or free spins.

Peter Pan is an iconic figure that is known more famously as the boy who wouldn't grow up. In the stories, he is the leader of the Lost Boys and lives on a mythical island called Neverland. Throughout the stories, he battles with Captain Hook and the fear of growing up.

It's only natural that iSoftBet would develop an online slot based all around this legendary figure to capture escapism and pure fun. Lost Boys Loot plays on 5-reels with 25 paylines and features an abundance of features that honour the Peter Pan story. Join this rapscallion bunch of kids to face off against the almighty Captain Hook and reclaim all the treasure he's stolen.

The design of the characters looks straight out of a Pixar film with big eyes, adorable faces and scrappy decor to create rambunctious children. Peter Pan has a malicious look and looks terrifying, whilst Peter Pan looks like the boisterous youth that he's known as.

All of the characters fit into their original design and style definitely making this slot feel very faithful to the Peter Pan story. The characters are even animated once you land on them and it makes the world of Lost Boys Loot feel even better.

Lost Boys Loot is actually set on Captain Hook's ship with the ship being surrounded by the ocean and clouds. On the deck of the ship, you'll notice piles of gold along with typical pirate accessories such as barrels. It all goes together so well that you can't help but appreciate the detail that iSoftBet actually went into.

As for the music, you can expect a whimsical score with violins and other stringed instruments to create something that you'd expect in this type of slot. Of course, there are brilliant ambient noises such as seagulls and the characters expressing themselves. Overall, Lost Boys Loot is a fantastic looking slot and the whole design is perfect.

The core gameplay of this slot is uncomplicated meaning that anyone can pick up and play it. There are 5-reels with 25 paylines, so there's not too much to follow. Whilst, there are a huge amount of features, these aren't too tough to follow and the slot guides you through.

All of the relevant menus can be found at the bottom of the screen with the spin button, autospin and bet level in the centre. To the far left, you'll notice a drop-down menu with sound settings and the paytable.

The RTP of Lost Boys Loot is 96.01% with a medium volatility level. Overall, the RTP is at a decent level but it's literally just above the average standard. As for the maximum payout, it's a pathetic 1,000x your stake which is so incredibly low for an online slot.

Lost Boys Loot is almost a perfect slot - but it just falls at the win potential. The features, design and overall gameplay are thoroughly enjoyable and entertaining to play with as there are so many little details that you'll find each time you play.

What lets down this slot is the low maximum win of 1,000x your stake which is just pathetic for an online slot. Perhaps if this slot was low volatility, it would make more sense. For a quick game or two, definitely try out Lost Boys Loot but don't expect any grand wins. Try out Megaways Jack or White Rabbit Megaways for better payouts.

Play Lost Boys Loot now at the following verified online slot sites. These slot sites have been thoroughly audited and reviewed by us to ensure they offer an exceptional user experience, are trustworthy, safe, secure, and boast the best variation of online slots in their portfolio including Lost Boys Loot:-

Enjoyed Lost Boys Loot? Here's a handful of similar slots we think you'll like too. These online slots have been chosen based on features and themes similar to Lost Boys Loot. You might also want to check out other iSoftBet slots.