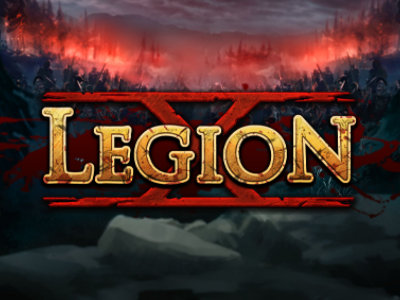 Nolimit City returns with an even grander slot that follows a Roman army's battle with natives in a struggle to conquer the land. With four different free spins and multiple xFeatures, Nolimit City has truly outdone themselves this time.

Not content with an abundance of features, this high volatility slot features a fierce payout of up to 31,000x your stake leading you to true victory in this Roman slot. If you love adventure, a huge selection of features and big payouts, then Legion X is the one for you.

“ With four free spins and multipliers, you couldn't ask for more! ”

Like most Nolimit City slots, this one contains the legendary xNudge wilds which always nudge to become fully visible on the reels. Each nudge will increase a wild multiplier by x1.

Alongside that, there's an infectious wild that can land on the first and land reels to convert all instances of a randomly selected lower symbol into a wild. If you manage to land two of these wilds, then all low symbols in the middle three reels will convert into wilds.

There's also the xWays mechanic that can only land on the first and last reel. These symbols transform into any other symbol except the wild and bonus symbol. Between 2 to 4 symbols of the same kind will be revealed leading to more wins.

If you land two of these symbols, then an Infectious xWays will be triggered and symbols of the same kind in the middle in the middle will expand. All low symbols on the middle reels will turn into wilds.

If you land three bonus symbols in the middle reels, then 8 Legion spins will be triggered. The last reel will get an extra row and the win multiplier increases with each xNudge wilds throughout the feature. Upgrade to an enhanced bonus mode if you land the xWays or Infectious Wild in the same spin.

Similarly, you can trigger the Legion X Equestris spins that are triggered through landing three bonus symbols and two xWays symbols. 10 spins are triggered and the active game area increases by the first and last reel becoming 4 high. Similarly, the win multiplier increases with the xNudge wilds and the xWays symbols remain sticky.

You can trigger the Legion X Fretensis spins by landing three bonus symbols and two Infectious Wild symbols to trigger 10 spins. The first and last reel gain 4 extra rows and the win multiplier increases with the xNudge wild. The Infectious Wild remains sticky in the position to convert all low symbols into wilds on each spin.

Legion X Gemina spins are triggered by landing three bonus symbols and one Infectious Wild with one xWays symbol to gain 10 spins. The first and last reel gain 4 extra rows with the win multiplier increasing with each xNudge wild. Throughout this mode, the Infectious Wild and the xWays symbol remain sticky to convert all low symbols to wilds and trigger Infectious xWays. 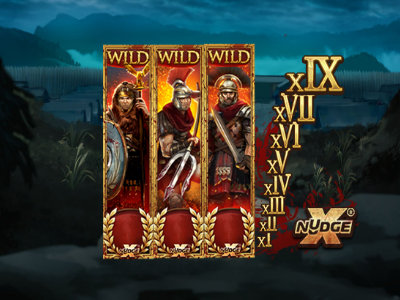 This slot contains the xNudge and xWays leading to greater wins. The xNudge fully nudges the wild to become fully visible and adds a multiplier whilst the xWays increases the ways to win from 72 to 72,000. 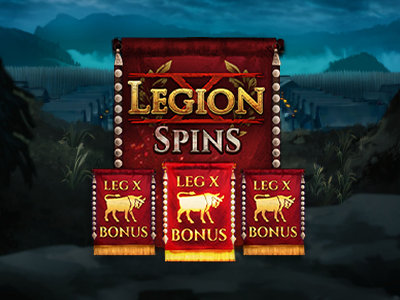 There are four different free spins in this slot all triggered with three bonus symbols and additional symbols correlating to the bonus. During each free spin mode, the multiplier increases with xNudge wilds.

The Roman army was the largest and most aggressive fighting force in the Ancient World with over 5,000 soldiers estimated in each legion. Legion X follows a legion trying to take down Gallic tribes to reclaim the land.

Developed by Nolimit City, this action slot plays on 5-reels with 72 ways to win in the base game but this expands up to 72,000 throughout the bonus features. With four free spins, multiple xFeatures and multipliers, Legion X is definitely one not to miss.

When the slot opens up, you won't immediately be blown away by the graphics but it conveys what it needs to. There's a battleground in the distance with various bloody items at the forefront showcasing a battle between the Celtic warriors and the Romans.

On the reels, there are all the warriors including the Celtic Warriors with bone armour and the grand looking Romans. It's nice to see the distinctive details and it successfully conveys a story without telling us too much.

The sounds are quite generic with chanting and orchestra sounds, but it's fitting for this slot. You almost feel like you are watching a Hollywood movie with the design.

There's no denying that Nolimit City slots are complicated in scale and this slot is no exception. It may take you a while to get to grips with everything as there's a lot going it. Legion X is not for newcomers and is for seasoned slot players who are looking for something more thrilling.

The RTP of this slot is a decent 96.04% which is over the average standard. This slot features high volatility gameplay leading to higher wins, but you may need to wait longer for them.

There are so many features in this slot all with multipliers that can lead to the maximum win of 31,000x your stake. Each free spin feature keeps the multiplier growing and doesn't stop until it ends. Sadly, it took over 400 spins until we triggered a free spin round, but it was well worth the wait when it came around.

Mental and Evil Goblins xBomb are complicated games from the developer, and it seems that they aren't stopping with Legion X. Whilst it's still difficult for most new players to pick up, it's easier to follow than the previous titles.

There's a huge amount on offer with this slot and Nolimit City definitely gives players something new and interesting to play. If you are a seasoned player who loves features, then look no further than Legion X.

Play Legion X now at the following verified online slot sites. These slot sites have been thoroughly audited and reviewed by us to ensure they offer an exceptional user experience, are trustworthy, safe, secure, and boast the best variation of online slots in their portfolio including Legion X:-

Enjoyed Legion X? Here's a handful of similar slots we think you'll like too. These online slots have been chosen based on features and themes similar to Legion X. You might also want to check out other Nolimit City slots.