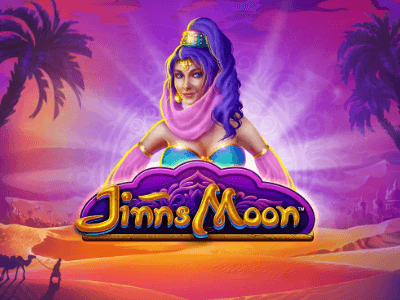 Become captivated by the beauty of the Arabian desert and the stunning sunset. Developed by Playtech's Rare Stone, Jinns Moon is part of the Fire Blaze Jackpot that can award players up to 2,000x their stake.

Jinns Moon is played on 5-reels with 50 paylines and an impressive respin feature. There's even free spins and a bonus symbol that acts as a multiplier!

The genie wild substitutes all other symbols aside from the scatter and moon symbol. It appears only on reels 2 to 5 during the base game but features on all reels during free spins.

Like other titles within the Fire Blaze Jackpot, the top prize is the Grand cash prize and it’s unlocked when 15 moon symbols appear on the reels. The Mini prize is worth 20x whilst the Minor is worth 100x. Players can hope to win 500x their stake by landing the Major prize. The Major, Minor and Mini prizes are all awarded during the Fire Blaze respin.

The moon acts as a bonus symbol and appears on all the reels. Amazingly, it can add multipliers varying between 1x and 50x bet.

Landing 6 to 15 moon symbols triggers the Fire Blaze respin mode with each symbol activating a cash prize or star icon. 3 respins will be awarded and star icons transform into the Mini, Minor or Major prize.

Players can activate 8 free spins by rolling 3 or more scatters. This feature can be retriggered if players manage to land 3 landings during free spins.

Set against the backdrop of the desert moon, you’ll find Jinns Moon. Developed by Playtech’s Rare Stone, Jinns Moon is an Arabian themed slot that is filled with the beauty and riches known only in Arabia.

Like most of the other titles with the Fire Blaze Jackpot series, players can win up to 2,000x with the Grand jackpot. With features such as the Fire Blaze respins and free spins, there’s almost everything you could need in this slot.

The music plays underneath the reels can only be described as magical or celestial. It feels otherworldly but strangely fits with the visuals. As Jinns Moon is an Arabian slot, you’d expect the background and design to be set there. Unsurprisingly, this is exactly what the developers did.

With Arabian architecture mixed in with the desert and stunning scenery, the slot feels like straight out of an Arabian nights fantasy story. The reels themselves feature genie lamps, magic carpets and many other symbols associated with Arabian fairy tales. Ultimately, the design is decent enough but could be pushed further by more animations throughout spins such as the background.

Whilst this may have an Arabian and fairy tale theme - the gameplay is relatively straightforward. There are only 50 paylines and 5-reels, so don’t worry about getting confused over it. Even during the Fire Blaze respin mode, all you need to do is spin.

Players wanting autospins will be happy to know that it can be found to the left of the big blue spin button with up to 100 autospins to be set. All other menus and settings can be found at the bottom left of the reels on a standout menu panel.

Most Rare Stone slots have a great RTP, and Jinns Moon is no exception. It has a high RTP at 96.58% with a medium to high volatility level making it a slot that’s worth a try.

Despite this, the maximum win for this slot is 2,000x your stake through the Fire Blaze jackpot. That’s the biggest win that you can get from this slot and it may put off a selection of players. If the slot was low volatility instead, then the low maximum payout would be more accepted.

Whilst there’s no denying that Jinns Moon looks decent and perfectly fits in with the Arabian aesthetic, the low maximum payout is a letdown. If the slot was a low volatility game, then 2,000x stake would be brilliant and this slot would rate a lot higher.

If that payout doesn’t put you off, then check out Jinns Moon. The Fire Blaze respin feature is fantastic and there is the potential to gain multipliers through the moon bonus symbol and even free spins. For those of you wanting a bigger jackpot, try out 10,000 Wishes instead.

Play Jinns Moon now at the following verified online slot sites. These slot sites have been thoroughly audited and reviewed by us to ensure they offer an exceptional user experience, are trustworthy, safe, secure, and boast the best variation of online slots in their portfolio including Jinns Moon:-

Enjoyed Jinns Moon? Here's a handful of similar slots we think you'll like too. These online slots have been chosen based on features and themes similar to Jinns Moon. You might also want to check out other Rare Stone slots.