Take a drive through the neon lights of Miami with two cool customers in the Hotline slot. This sleek slot is loosely based on the famed 80s TV show Miami Vice. The retro-style game is a release from the industry experts at NetEnt has 5 reels and 30 paylines. The slot action-packed slot features free spins, re-spins, expanding wilds and a bonus bet game.

Hotline brings plenty of buzz and excitement, exactly what you would expect from a NetEnt game. The feature-full video slot is jammed with rewarding symbols and high paying extras. Let’s take a spin around this slot and explore what features are found in this sleek-city thriller. 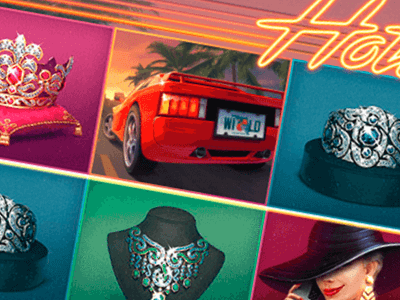 The expanding wilds are where you will find excellent win potential. Land a wild on one of the three hotlines and it will expand and trigger a cumulative payout. 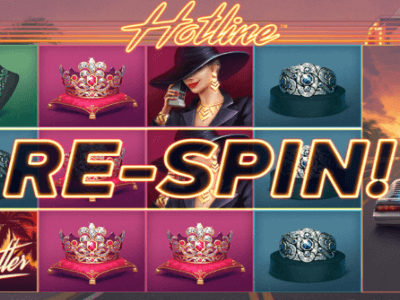 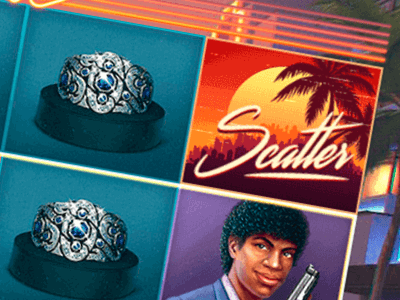 The sunset scatter symbol will trigger the Free Spins feature when you land 3 scatters on reels 1, 3 and 5. You will be awarded a total of 7 free spins. During the free spins, wilds can expand and stick if they land on the activated hotlines. Landing wilds on every reel will result in a huge payout. 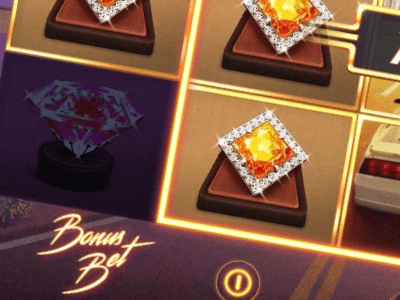 The bonus bet is the main attraction within this slot game. The bonus bet feature allows you to activate one or all three lines into hotlines. When the wilds land on the hotlines the win potential skyrockets. This betting feature does require an additional bet amount to play.

You only need to take a look at the game tile to see what inspired this slot. This game brings the cool vibe of Miami Vice to the reels and it packs in some serious excitement and drama. First launched in 2016, the game oozes cool with attractive ladies, diamonds and two characters that look strikingly similar to Crocket and Tubbs on the reels.

Fast, flashy and full of neon, Hotline takes you on an action-packed ride through the mysterious underbelly of 80s Miami. The game has proved to be a popular hit with slot enthusiasts and has even earned itself a sequel.

The game is set across 5 reels and 30 paylines. You can snatch a top prize of 60,000 coins when you land those high paying symbols. In true NetEnt form, the game delivers frequent payouts thanks to the free spins, re-spins, expanding wilds and bonus bet extras.

Sharp, speedy and utterly cool, Hotline captures the vibe of 80s Miami thanks to the smooth sounds and stunning visuals.

NetEnt only produces top-quality content and this game certainly stays true to form. Hotline is a graphically pleasing slot with flashy symbols and immersive images. Hotline has the good looks and charm.

Straightaway you are greeted with the feel of 80s Miami, the class, the cool and the characters. Loosely set on the wildly popular 80s TV show Miami Vice, Hotline delivers slot justice with its sunsets and sports cars. As you spin through the neon lights you have a smooth groove 80s soundtrack that adds another level of cool to the occasion.

The background of the reels puts you in the fast lane, speeding through pleasurable pay outs. The game visuals and animations maintain the retro vibe and the characters ooze class and cool, bringing a movie atmosphere to the screen. Other symbols that appear on the reels are gemstones, sports cars and sunsets.

Hitting the expanding wilds brings more thrills to the upbeat video slot and flawless animation is there to further immerse you. The game controls are kept simple but feel like you’re at the wheel of a sports car.

The game itself maintains all the mechanics from your standard 5 reel slot. The spin button sits in the centre, looking almost like a speedometer.  The auto play and max bet controls sit on the left side while maintaining the flashiness of theme. You can auto play up to 100 spins and place a minimum bet amount of £0.15 and a maximum bet amount of £150 per spin.

On the left side of the reels are your hotline controls where you can set how many hotlines you want in play with each spin. At the bottom of the reels, you have the win potential indicator scrolling across.

Hotline isn’t what you would call a big jackpot slot, but it does have excellent win potential. The maximum payout sits at 60,000 coins, you can scoop a £2,000 top prize on a single spin. The femme fatale character can pocket you 6,000 coins on a single spin so be sure to look out for her.

Hotline is a medium volatile slot with a favourable 97.13% RTP so players can expect frequent wins. Although its top win amount may be dwarfed by many modern slot games, Hotline brings the excitement through its regular payouts and its thrilling play.

The Miami Vice inspired slot has won many fans over and even proved popular enough for a sequel with Hotline II. The slot is instantly recognisable for its suave appearance and flashy rewards. Slot enthusiasts love the vibe this game brings and when the reels spin, its non-stop action. Hotline has worked its way into NetEnt’s top slots and stood the test of time, often appearing on the casino homepage and regularly used in bonus offers. Hotline is nothing but hot stuff!

Play Hotline now at the following verified online slot sites. These slot sites have been thoroughly audited and reviewed by us to ensure they offer an exceptional user experience, are trustworthy, safe, secure, and boast the best variation of online slots in their portfolio including Hotline:-

Enjoyed Hotline? Here's a handful of similar slots we think you'll like too. These online slots have been chosen based on features and themes similar to Hotline. You might also want to check out other NetEnt slots.