Great Rhino from Pragmatic Play has become a very popular video slot thanks to its frequent payouts and engaging gameplay. The slot is set across the sun-kissed grasslands of the African Savannah where rhinos roam the reels and big prizes are for the taking. The game packs in some rewarding features and lots of high paying symbols.

“ A fast and fun slot with a stampede of rewards! ”

Great Rhino is played on 5 reels, 3 rows and 20 paylines. The slot may have a standard set up, but it packs in plenty of action across the reels thanks to the abundance of rewarding symbols. You can boost payouts through wilds, free spins and a super re-spins feature. There are also two jackpot prizes that you can hunt down. Let’s take a look at what features you can enjoy in the Great Rhino slot from Pragmatic Play. 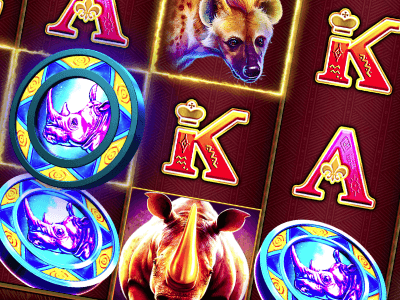 This is triggered by landing two or more full stacks of rhino symbols. You get 3 re-spins. The stacked symbols remain fixed on the reels, with all other symbols removed, each time a rhino appears, it locks and an extra re-spin is added. Landing 14 rhinos will trigger the Major Jackpot of 375x the stake. 15 rhinos award the Grand Jackpot of 500x the stake. 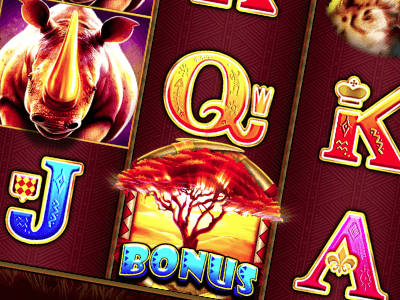 The tree symbol is the scatter and when 3 lands on reels 2, 3 and 4, the free spins are activated. You are awarded 10 free spins, during which the rhino symbol behaves like a wild and can stand-in for all other symbols.

Spin the reels over the great African Savannah where wild animals roam freely and wins are for the taking. The Great Rhino slot from Pragmatic Play was released in 2018 and has become a wildly popular choice of slot. The game creates a soothing playing experience thanks to its rich graphics and immersive soundtrack. The game doesn’t have the most creative theme or visuals, but it brings high levels of fun to the occasion.

Great Rhino is played on the usual 5 reels with 20 paylines. The game has a good mix of in-game bonus extras with high paying wilds, multipliers, scatters and a rewarding free spins feature. You can also hit big wins in the Super Re-Spins game where you can hit up to 500x your stake.

Although Great Rhino doesn’t have the impressive graphics and innovative features that many slot games boast, it still brings some top-quality slot play to the table. Great Rhino keeps things simple with uncomplicated gameplay and straightforward features.

The Great Rhino slot sets the scene in the hot plains of the African Savannah with dusty reds and oranges filling the screen. The slot appearance is very easy on the eye and creates a welcoming atmosphere when it comes to spinning the reels.

On the slot reels, you will find flamingos, crocodiles, hyenas, cheetahs and rhinos, which is the top paying symbol. The game also ramps up the gaming experience with a nice high tempo soundtrack that is well suited to the game’s visuals. When you hit a winning combo there is some nice animations and amped-up audio to deliver a stampede of excitement.

The in-game bonus rounds also bring a good level of joy. Although the game isn’t special when it comes to the visual quality, the cartoon-like symbols and mix of great audio really bring the slot to life.

Great Rhino is set across 5 reels with 3 rows and 20 paylines. The slot displays the two jackpot amounts in the top corners. In the top right corner there is also an icon where you can view your previous playing history, this is a nice feature that all Pragmatic Play slots have. The spin button is big and clear and next to that is the autoplay control where you can set up to 100 automatic spins. You can also set the bet amount that ranges from £0.20 to £276, making it a suitable choice for the casual player and the slots pro. There is also an information icon where you can see a breakdown of the symbols and bonus features.

Great Rhino features two jackpots, a Grand jackpot and a Major jackpot. The Grand jackpot is the largest and starts at £100, with the jackpot increasing when you increase your bet amount. The jackpot can go up to a six-figure prize. The Super Respins feature is where the big payouts are lurking. This is also where you can trigger the jackpot prizes, although it will take 15 rhino symbols to trigger, this will land 500x your stake.

Great Rhino is full of high paying symbols and delivers frequent payouts. The game is medium to high variance with a very respectable 96.53% RTP.

Pragmatic Play’s Great Rhino slot has made its way onto the front page of many online casinos thanks to its fast-paced gameplay and rewarding features. The game has two enticing jackpots but it’s the wild symbols that deliver the regular rewards. The game is easy to play and provides a pleasant playing environment with nice cartoon visuals and an engaging soundtrack. Great Rhino is a simple slot that has the perfect mix of everything.

Play Great Rhino now at the following verified online slot sites. These slot sites have been thoroughly audited and reviewed by us to ensure they offer an exceptional user experience, are trustworthy, safe, secure, and boast the best variation of online slots in their portfolio including Great Rhino:-

Enjoyed Great Rhino? Here's a handful of similar slots we think you'll like too. These online slots have been chosen based on features and themes similar to Great Rhino. You might also want to check out other Pragmatic Play slots.