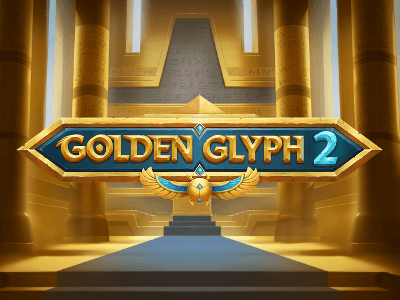 Return to the land of Pharaohs in Quickspin's Golden Glyph 2. If you loved the first slot, then you'll love this improved version with a better design, smoother gameplay and bigger wins.

Cluster Pays is also back with wins being created by matching 5 or more symbols. If you loved the first slot, then you are guaranteed to absolutely love this one.

“ If you liked the original, then you'll absolutely love this one ”

Jump straight into the action and play Golden Glyph 2 now at the following fully licenced UK slot sites. These slot sites have been thoroughly audited and reviewed by the team here at Slot Gods to ensure they offer an exceptional user experience, are trustworthy, safe, secure, and boast the best selection of online slots in their portfolio including Golden Glyph 2...

During your playthrough, if you land a winning combination with the Power Glyph symbol, then you'll receive a Power-Up feature. These are awarded according to the symbols in the row that appears at the bottom and changes with every spin. You can even land all of the Power-Ups. These can include:

Aside from the Power-Ups, you can win free spins by landing 3 scatters during the base game. You can win 7 free spins and an additional 5 free spins if you land 3 more scatters. During free spins, the Golden Glyph wild stays for the duration of the turn and moves randomly to another location between each spin. Landing winning combinations with the Power Glyph will lead to Power-Up features to improve your gameplay. This could be gigantic wilds, Golden Glyph wilds, spawning wilds and removing symbols! If you manage to land 3 or more scatter during the base game, then you'll trigger 7 free spins. Amazingly, the Golden Glyph wild stays on the reels for the duration of free spins.

The original Golden Glyph released in 2020 to moderate success due to the refreshing nature of the slot. The developers, Quickspin, cleverly decided to use the Cluster Pays mechanic and apply it to the Egyptian genre. They saw the success and decided to release a sequel with even more exciting features.

Golden Glyph 2 is a medium to high volatility slot that plays on a grid of 7 x 7 with even more features. The Power-Up feature returns along with the free spins bonus and an added Buy Feature.

The reels and the symbols are almost identical without any changes. That's not to say that the symbols don't look great but it feels a little lazy on their part.

Thankfully, the music is great and fits in well with the adventure vibe they are giving off. It's similar to the original slot music but with added notes to make it a little more intense.

Golden Glyph 2 uses the Cluster Pays mechanic which means that you have to match at least 5 symbols together for a win - so if you've played the first, then you'll easily pick this up.

Strangely, all the menus are to the right of the reels which is odd for a Quickspin slot - but they are easy enough to find. The spin button is centred with the autospin and bet level just underneath.

Golden Glyph 2 is a medium to high volatility slot with a decent RTP of 96.06% - which is good for an online slot. You could win up to 26,800x your stake through this, as opposed to the original that only went up to 13,185x your stake. These wins could be found throughout the free spins with multipliers.

The original slot was entertaining enough, but this one adds to it in so many more ways. Not only do you have a bigger payout, but you even have more features and a better design to keep you engaged.

Perhaps, the strongest point for Golden Glyph 2 has to be the Cluster Pays mechanics mixed with the visuals to create something that is so satisfying to watch. If you loved the original, then you should definitely check out this slot!

Play Golden Glyph 2 now at the following verified UK slots sites. These slot sites are fully licenced and have been thoroughly vetted and reviewed by us to ensure they offer a great user experience, are trustworthy, secure, and have a wide variety of the best online slots in their lobbies including Golden Glyph 2:-

Enjoyed Golden Glyph 2? Here's a handful of similar slots we think you'll like too. These online slots have been chosen based on features and themes similar to Golden Glyph 2. You might also want to check out other Quickspin slots.