Dark King: Forbidden Riches is a dark, gritty and incredibly atmospheric 5-reel, 20 payline slot developed by NetEnt. This dramatic slot (that gives off some serious Lord of the Rings vibes) offers players the opportunity to benefit from wild multipliers that are equal to the number of wilds that land on the reels. There's also a free spins round that sees five spots on the reels remain sticky whenever a wild lands into one of those spaces.

“ Quite easily one of NetEnt's most visually stunning slots to date ”

Jump straight into the action and play Dark King: Forbidden Riches now at the following fully licenced UK slot sites. These slot sites have been thoroughly audited and reviewed by the team here at Slot Gods to ensure they offer an exceptional user experience, are trustworthy, safe, secure, and boast the best selection of online slots in their portfolio including Dark King: Forbidden Riches...

When players land one or more wild symbol anywhere on the reels during a spin in the base game (or free spins) all payline wins are automatically multiplied by a win multiplier equal to the number of wild symbols on the reels.

If players manage to land three or more of the game's wild symbols anywhere on the reels then the Dark King himself will be awoken, he will then smash his sword into the ground, sending players into the bonus round.

Here five sticky wild hotspots will appear on the reels that make the shape of a cross. If any wild symbols land on in these spots they will stick to the reels for the remainder of the bonus round as well as gift players with an additional free spin. 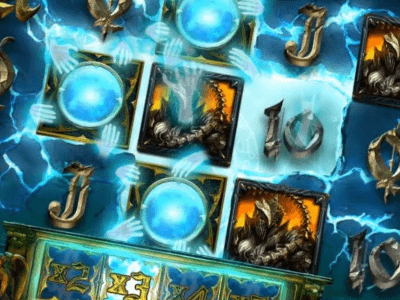 When players land one or more wild symbol anywhere on the reels all payline wins are automatically multiplied by a win multiplier equal to the number of wild symbols on the reels. 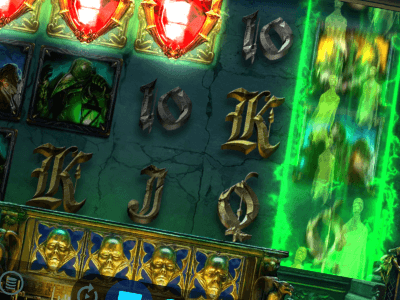 Players can trigger a lucrative free spins bonus that sees all wild symbols become sticky if they land in one of five sticky wild hotspots. These wilds also gift players additional free spins.

Where do we begin with this game? Just like most of the slots NetEnt have developed over the years, this one is just wonderfully designed. The team tasked with creating this game team have knocked it out of the park.

This ominous horror-themed slot does everything right, all the way down to the most minute of details. The reels sit inside what we can only assume is an ancient tomb, as there are many skulls set into the stone wall to the right, whilst on the left is the Dark King himself watching over events.

Low paying symbols appear as your standard card suits 10, J, Q, K, A whilst high paying symbols are a little bit more dramatic. There's the grim repeat on a skeletal horse, a plague doctor carrying a green lantern, an armour-clad warrior carrying a weapon made of what looks like a human spine, another warrior brandishing a large two-handed sword and of course the Dark King himself. The game's wild symbol is a magic blue sphere that can bring the dark King to life.

One area online slot developers are often guilty of ignoring is the music and soundtrack associated with their game, it's easy to cheap out and just place some generic music on top of their slot... But not here! Dark King: Forbidden Riches sounds fantastic, the music fits the theme down to a tee, it genuinely felt like we were playing a AAA videogame, not an online slot.

We have to give full credit to NetEnt on this occasion, because they've easily created what has to be one of the spookiest, most atmospheric online slot games we've ever had the pleasure of playing.

Like many NetEnt slots Dark King: Forbidden Riches has a semi-transparent action bar along the bottom of the game screen that doesn't detract too much from the elaborate design of the game.

On the left-hand side of the action bar players can access a hamburger menu that has game settings, the information page that has the paytable and bonus feature details and the players bet value (which can be set anywhere between 0.20 and 40).

In the centre of the action bar players can set up to 1000 automated spins, set the game to turbo mode, and of course spin the reels. The right-hand side of the action bar has all the player's information on their current stake and casino balance.

Sadly this is another case of a wonderfully designed slot being let down by a poor win potential. Dark King: Forbidden Riches may well be one of the best looking slots on the market, but what's the point if nobody wants to play it as it's stringent with payouts?

This slot has a decent RTP of 96.06% and a below-average maximum payout of 2,000x the player's stake, which for a slot released post-2020 is depressingly low.

It's genuinely such a shame that Dark King: Forbidden Riches has such a disappointing win potential, this game could have easily ranked up there as one of the best slots to come out in 2020.