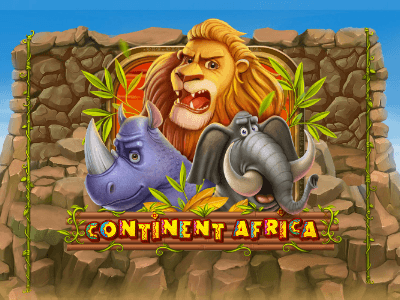 Meet adorable safari animals and enter the beauty of the African continent in this slot developed by BF Games.

Containing all the staples needed in modern online slots such as Free Spins, Sticky Wilds and Scatter Symbols. For a bold and colourful slot, try out Continent Africa.

Whilst Continent Africa sounds exhilarating and filled with features - it’s quite the opposite. The staples of wilds, scatters and free spins are available but that’s about it.

You can win up to 15 free spins with a 2x multiplier by landing 3 or more scatter symbols on the reels. Players even have the chance to unlock 15 more extra spins by re-triggering this feature.

During any successful spin, you have the option to gamble away your money for the chance at winning double the amount. Make sure to check with your chosen online casino first to make sure that it’s active.

Wanting to witness the thrill and beauty of tribal culture, then look no further than BF Games’ Continent Africa. As the name suggests, the slot is set in the continent of Africa. With 5-reels and 20 paylines, the gameplay is quite traditional. It brings excitement in the form of an animal theme and embracing the landscapes of the Continent Africa.

Surrounded by animals and stunning landscapes, Continent Africa looks great. The style of the characters and backgrounds almost feels like the DreamWorks film Madagascar. It’s playful and fun to make it more exciting.

Sadly, the backgrounds aren’t animated - so it may feel more like a still from the film rather than a scene. The slot only comes to life once you successfully land on a payline and the animals come to life. That’s when Continent Africa really feels more alive.

As you open up the slot, you’ll hear tribal chants that truly sound amazing. It’s a shame that they stop playing this after a few seconds. The only other sounds you get are the sounds of the reels spinning. Other than that, it’s mainly silent. For a title from BF Games, it does feel a bit lacking in creativity. Bonnie & Clyde and Stunning Cube have so much imagination thrown in, that Continent Africa let’s down the name a little bit.

There is a lot of inspiration aesthetically from Mega Moolah in visuals, and there definitely is in simple gameplay. Nothing is too complicated and all explained fairly well. It’s a standard online slot game with nothing special too it really.

Menus are easy to see at the bottom with a big green button highlighting the spin button. To the right of this, you can see autospin between 10 to 100.

Honestly, Continent Africa has a great RTP that is above the standard average at 96.22%. With the medium volatility thrown in as well, you could have quite a balanced game with this slot. It’s great for veterans and newcomers to online slots.

Unfortunately, it doesn’t have the payout to match. You can win a measly 20x your stake by rolling 5 wilds during the slot. You could double this during the free spins round, and then double it up by gambling. That leaves you with a maximum of 80x your stake. Of course if you bet the maximum, then you could be in for some nice returns. However, this will isolate players and for that reason lowers the overall win potential.

Whilst Continent Africa has some fun elements to the gameplay, overall it’s quite outdated. It was released in 2017, but has not held up to the best standard now. If you love animal themed slots and want something with a great RTP, then Continent Africa is one you should check out. For a lower RTP but the chance at a progressive jackpot, try Mega Moolah instead.

Play Continent Africa now at the following verified online slot sites. These slot sites have been thoroughly audited and reviewed by us to ensure they offer an exceptional user experience, are trustworthy, safe, secure, and boast the best variation of online slots in their portfolio including Continent Africa:-

Enjoyed Continent Africa? Here's a handful of similar slots we think you'll like too. These online slots have been chosen based on features and themes similar to Continent Africa. You might also want to check out other BF Games slots.