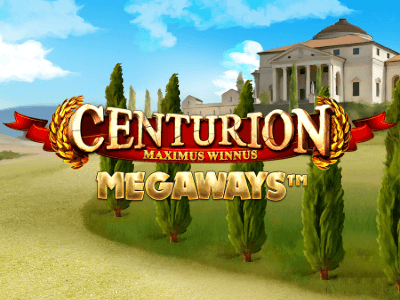 Set in Ancient Rome, Centurion Megaways follows a Roman officer claiming a town with the player tagging along as a soldier as well. As a Megaways slot, it features up to 117,649 ways to win with a maximum payout of 250,000.

With the bonus wheel and modifiers, you are sure to return victorious. The goal is to take as much treasure as possible, are you up for the task?

“ With 5 modifiers and 6 bonuses from the wheel, this is a slot not to miss! ”

One of the biggest draws of Centurion Megaways is the ability to gain a modifier randomly through any base spin. These modifiers include:

The other highlight of this slot has to be the bonus wheel. There are up to 6 different prizes up for grabs each with their own special ability. The more scatters you land, the less choice you have. For example, 3 scatters will give players the option of all 6 prizes but 7 scatters only gives players the chance to win Super Wild Power Spins.

Players will also notice a bonus gamble feature that allows players to risk the current bonus for a chance to win the next high paying bonus symbols with the expected payback being 100% during this round. However, this may not be available in the UK or at your chosen casino, so double check first.

Like in most slots, the wild substitutes for all symbols except the bonus scatter. During Caesar's Free Spins and Super Caesar’s Free Spins, the wild symbols only appear on the extra reel.

Randomly during any base spin, the centurion can appear and deliver a modifier. There are 5 different modifiers that can boost your gameplay to give you even bigger wins.

Enter the ancient Roman army and join the centurion officer to claim all the riches of the town. It’s up to you and your team to find the hidden treasures and win big in Centurion Megaways.

Developed by Inspiring Gaming, this Megaways slot is the sequel to the original Centurion. As you can imagine, the slot now has even more ways to win with Megaways. This slot is packed full of incredible features with the bonus wheel and modifiers that’ll completely transform your game.

The character design of the symbols seems inspired by the Horrible Histories book series as it’s a mixture of realistic and cartoon designs. Of course, the main guy is the centurion officer that stands proud next to the reels. Other symbols include coliseums and other Ancient Roman tropes.

Now, the background fits in perfectly with Roman architecture and greenery to simulate Ancient Rome. If you look closely in some of the bushes, you’ll notice soldiers hidden amongst them to make it feel even more like an espionage.

Thankfully, the music is as grand as the visuals with trumpets and drums playing as you spin. It can get a little frustrating but only plays during spins. This is good, but the lack of any ambient noise feels a tad cheap.

If you’ve played a Megaways slot, you’ll know that the ways to win increases with each spin. For newcomers to Megaways, don’t worry as it’s straightforward and you won’t have to do anything yourself as the slot works it out for you.

Like most Inspired Gaming slots, the spin and settings button is to the far right of the reels. You can find the bet level just to the left and activate the autospin by holding down the space button. Players can set 5 to 100 autospins during this mode.

As a high volatility slot, you can expect less frequent returns but higher when they do. According to the developers, this slot is capped at 250,000 for a maximum win. With an RTP at 95.90%, players should expect a fair theoretical return to player.

During the base game, you can win up to 50x your stake by landing 6 of the centurion symbols. The bonus wheel and modifiers can improve your stake even more with multipliers and extra spins.

As far as design and aesthetic goes, Inspired Gaming is notorious for traditional slots - so don’t expect too much from that. The gameplay itself is pretty engaging with the modifiers and bonus rounds!

Of course the win potential isn’t spectacular for a high volatility slot, but it’s decent enough to provide some satisfying wins. If you love Ancient Rome and mythical slots in general, then definitely try out Centurion Megaways.

Enjoyed Centurion Megaways? Here's a handful of similar slots we think you'll like too. These online slots have been chosen based on features and themes similar to Centurion Megaways. You might also want to check out other Inspired Entertainment slots.