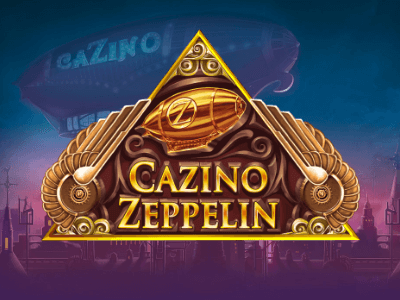 Cazino Zeppelin is a 5-reel, 20 payline steampunk-themed slot developed by Yggdrasil that boasts a handful of fantastic features that could see players walk away with 6,700x their stake. These features include sticky and transferring wilds, doubled wilds and up to 20 free spins.

“ It's well worth enjoying the glitz and glamour of this shiny steampunk-inspired slot! ”

Jump straight into the action and play Cazino Zeppelin now at the following fully licenced UK slot sites. These slot sites have been thoroughly audited and reviewed by the team here at Slot Gods to ensure they offer an exceptional user experience, are trustworthy, safe, secure, and boast the best selection of online slots in their portfolio including Cazino Zeppelin...

If players trigger this game's free spin bonus whilst there are wilds symbols on the reels then they'll automatically be carried over into the bonus feature.

On top of that, any wild symbols that land during the bonus feature will become sticky and remain on the game reels until the bonus comes to its final conclusion.

The main bonus feature in Cazino Zeppelin is of course the free spins. The number of free spins players receive depends entirely on how many scatter symbols players land, these are as follows:

If players trigger this game's free spin bonus whilst there are wilds symbols on the reels then they'll automatically be carried over into the bonus feature. All wilds during the bonus feature are sticky and remain until the end of the bonus.

Players can trigger 10, 15 or 20 free spins by landing 3, 4 or 5 scatter symbols respectively. Any wild symbols that landed on the reels during the triggering spin will be carried over into the bonus, wilds that landed after will stick to the reels.

Cazino Zeppelin is a 5-reel, 20 payline steampunk-themed slot developed by Yggdrasil that can see players benefit from wilds, sticky wilds, doubled payouts and up to 20 free spins.

Cazino Zepplin is a lavish slot set in an alternative steampunk world during the height of the industrial revolution in the 1800s, the reels are adorned with gold trim and the symbols feature typical slot iconography and strange folk you might find inside the aircraft itself. Low paying symbols are your clubs, diamonds, hearts and spades whilst high paying symbols are a gentleman hoarding casino chips, a card shark with four aces, an enthusiast fellow throwing dice and a wealthy high-roller flashing the cash.

This game's classical soundtrack is genuinely quite relaxing and had us sinking into our chair in glee as we span the reels, it still managed to be upbeat and perky enough to keep us excited! It gets full marks from us.

After playing Cazino Zepplin for a while we were incredibly surprised to find that this slot was developed way back in 2015 (a long long time ago in slot years) as this game looks absolutely immaculate, which to be honest, shouldn't surprise us too much considering that it's developed by the arty-folk at Yggdrasil. Had you asked us to guess we would have said that this slot was released some time around 2020.

This slot is inoffensive as they come, there's nothing here that'll throw you off or confuse you, and we like a simple experience from a slot sometimes... They definitely don't always need to feature intense mechanics and have a million and one things going on at once.

The game is controlled using buttons that can be found along an action bar at the bottom of the game reels. On the left-hand side of the action bar players can access a pop-out game settings menu and increase and decrease their coin value. In the middle of the action bar there's a max bet button, a spin button and an autospin button (that allows for infinite spins).

This high volatility slot has an RTP of 96% and a maximum win of 6,700x the player's stake.

For an older slot Cazino Zeppelin is genuinely an enjoyable game! Visually, it's very flashy and grand, and importantly it's pretty easy to play without being too boring! If you're after an attractive no-nonsense slot then this might be the one!

Play Cazino Zeppelin now at the following verified UK slots sites. These slot sites are fully licenced and have been thoroughly vetted and reviewed by us to ensure they offer a great user experience, are trustworthy, secure, and have a wide variety of the best online slots in their lobbies including Cazino Zeppelin:-

Enjoyed Cazino Zeppelin? Here's a handful of similar slots we think you'll like too. These online slots have been chosen based on features and themes similar to Cazino Zeppelin. You might also want to check out other Yggdrasil slots.