Bounty Raid is a 5-reel, 10 payline slot from Red Tiger Gaming. There are two symbols the players will look out for in this innovative slot. Firstly, the Bounty Hunter symbol, when she appears all bandits symbols (these have a cash value) are locked for a respin bringing huge rewards! If the Sheriff symbol appears then all the bandits on the reels are caught and the player receives a cash prize of their combined value!

“ Bounty Raid offers all the wonders of the Wild West, but with a woeful win potential ”

Non-paying 1x2 scatter symbols may appear in the middle game reel, locking all Bandits on the reels for a single respin with only Bandits and a Golden Coin scatter symbol (that appears exclusively during respins, upping the value of all Bandits) appearing.

If a Sheriff symbol lands on the reels at the same time as Bandit symbols then the player will automatically receive a payout which is the combined value of all the Bandits at that time. 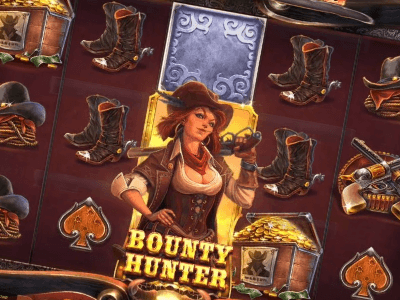 If a scatter symbol appears in the middle game reel, Bandits symbols lock for a respin, with only Bandits and a Golden Coin scatter symbol landing. Players receive a payout of all the Bandit's combined values when no more land after a respin. 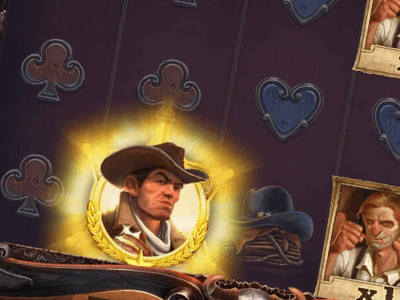 If a Sheriff symbol lands on the game reels alongside any Bandit symbols at the same time then the player will automatically receive a payout that is the combined value of all the Bandits at the given time.

Bounty Raid is a rootin'-tootin 5-reel, 20 payline Wild West-themed slot that celebrates all things Cowboy-related! Lock and load your pistol and get spinning the reels, this unique Red Tiger Gaming slot boasts a Bounty Hunter feature that sees bandits locked to the reels and the Sheriff feature that sees all Bandit symbols captured and their collective values paid out to players.

The overall design of Bounty Raid is massively underrated, the reels are surrounded by a gorgeous metal and wood trim that looks somewhat like the detailing you'd find on an old-style revolver. The reels themselves are a clean burgundy colour which allows the symbols to really stand out.

Behind the reels is an old-fashioned sepia-tone image of a group of bandits galloping along on their horses, pursued by who we can only assume is the Sheriff who has his gun drawn ready to shoot them down.

Low paying symbols are card suits clubs, diamonds, hearts and spades. High paying symbols include a pair of boots, a pile of rope with a cowboy hat atop it, a horses saddle, two crossed revolvers and an overflowing chest full of gold.

There are six special symbols, five of these display the faces of feared bandits, each of which have a special multiplier attached to them. The sixth and final special symbol is the Sheriff, if he lands on the reels with the bandits, then they're caught.

Like all Red Tiger Gaming slots, Bounty Raid is incredibly easy to navigate. Players can change their stake (between 0.10 and 100) by clicking the - and +, and set up to 100 automated spins via a button on the far left-hand side of the slot. On the opposite side is a large yellow spin button, that's literally all there is to this game.

Frustratingly, Bounty Raid has a below-average RTP of 94.72% and an equally disappointing maximum win of just 1,000x the player's stake, which for a slot that doesn't have a progressive jackpot released in 2020 is pretty bad.

Bounty Raid genuinely has great potential to be a fantastic slot that doesn't rely on a free spins feature to keep players entertained, but with such a pitiful win potential we can't really get too excited about this brilliantly designed Red Tiger slot.

Play Bounty Raid now at the following verified online slot sites. These slot sites have been thoroughly audited and reviewed by us to ensure they offer an exceptional user experience, are trustworthy, safe, secure, and boast the best variation of online slots in their portfolio including Bounty Raid:-

Enjoyed Bounty Raid? Here's a handful of similar slots we think you'll like too. These online slots have been chosen based on features and themes similar to Bounty Raid. You might also want to check out other Red Tiger Gaming slots.