Book of Ra Deluxe is a classic Egyptian Themed slot developed by Greentube in 2008. This 5-reel, 10 payline slot is renowned for helping introduce the iGaming world to many key bonus features and mechanics that we see in many modern online slots today such as the gamble feature and multiplied wins.

“ A blast from the past, Book of Ra Deluxe is dated but with great win potential ”

The main feature in Book of Ra Deluxe is the free spins feature. 10 free spins are triggered whenever 3 scatter symbols land anywhere on the reels.

Before the spins begin the Book of Ra will flip through pages before deciding on a symbol to stop on. This symbol will become an expanding symbol, and every time it appears on the reels during the bonus it will cover the entire reel, leading to some pretty tasty wins.

It’s also worth noting that every single win during the Book of Ra Deluxe free spins bonus round comes with a 2x multiplier, so ALL wins are doubled!

If you fancy taking a risk after each and every base game win then you’re in luck! Book of Ra Deluxe gives players the opportunity to gamble their winnings in an attempt to double them.

You’ll be faced with a hieroglyphic themed playing card which flashes between red and black. It’s down to you to decide which colour you believe the card will be when flipped. If you get it right you’ll multiply your winnings by 2x, if you lose you won’t win anything at all… In fact, you’ll lose all your winnings from the original spin. 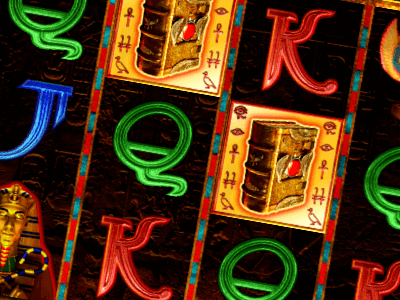 Whenever players land 3 scatter symbols anywhere on the reels they'll trigger 10 free spins with a random expanding symbol active for the duration of the bonus. All wins are doubled. 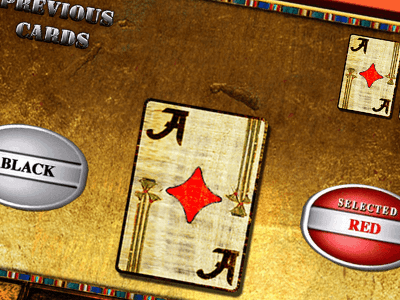 Players can gamble their winnings on every single win by playing an easy card game that requires players to guess whether the card will be red or black.

Book of Ra Deluxe is an old-but-gold Egyptian themed slot that was released way back in April 2008 by Novomatic subsidiary Greentube.

As is to be expected from a well-aged online slot released by a subsidiary of Novomatic, this game highly resembles a classic slot machine game that you would expect to find in any casino on the world-famous Las Vegas strip… And that’s not a bad thing!

Considering the age of this game, it actually looks pretty good, but it really does pale in comparison to a modern-day slot. Behind the reels sits a dimly lit wall covered in ancient hieroglyphics, further behind that is the Egyptian desert during sunset.

The low paying symbols are 10, J, Q, K, A and the high paying symbols are popular Egyptian themed items such as a scarab, golden statue, mummy’s tomb and a brave adventurer (whose design has been ripped off more times than we care to count!).

The best design element in this game for us has to be the Book of Ra Scatter symbols. The scatters are interactive and take the player on a journey deep into a hidden Egyptian temple in which the famous book is discovered. The book then opens and flips through several pages revealing the special expanding symbol in another animated short in a pop-out window.

If you like old-style slot games you’d find in a casino then you’ll love Book of Ra Deluxe, rather than have its own Egyptian themed soundtrack, Greentube has used the catchy jingles you’d hear coming from an old-style slot cabinet. So expect a huge wave of nostalgia when you spin the reels of this slot for the very first time.

This game is an updated version of the 2005 classic Book of Ra, the main addition is the extra payline which takes it from 9 paylines to a grand total of 10. Whilst in this day and age that might seem pretty pathetic, you have to remember that this game came out in 2008.

Despite having a lower than average RTP (95.10%) this game offers a very healthy 10,035x your initial stake if you manage to get lucky during the bonus rounds.

We’ll be honest, Book of Ra Deluxe is old, dated and doesn’t really hold up when compared to the brand new online slot games that have been released more recently… However, when this game was originally released it was groundbreaking, and it deserves recognition for that.

If you enjoy a blast from the past and like to replicate the feeling of playing a slot machine in a real Vegas casino then perhaps this game is for you. It might not be the flashiest, but it has great win potential and is certainly fun to play, especially during the free spins round!

Play Book of Ra Deluxe now at the following verified online slot sites. These slot sites have been thoroughly audited and reviewed by us to ensure they offer an exceptional user experience, are trustworthy, safe, secure, and boast the best variation of online slots in their portfolio including Book of Ra Deluxe:-

Enjoyed Book of Ra Deluxe? Here's a handful of similar slots we think you'll like too. These online slots have been chosen based on features and themes similar to Book of Ra Deluxe. You might also want to check out other Greentube slots.