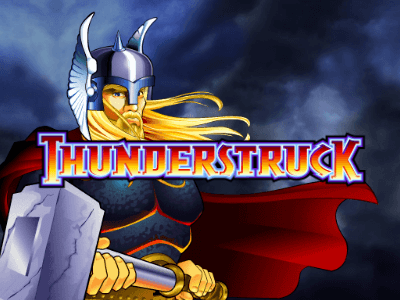 Back in 2003, Microgaming decided to release an online slot unlike any other called Thunderstruck. Playing on 5-reels with 9 paylines, Thunderstruck delivers some shocking wins with free spins and wilds that have multipliers attached to secure the maximum win of 30,000x your stake. It's no surprise that this game became a cult classic due to the incredible win potential.

After the success of the original slot, Microgaming decided to create a sequel called Thunderstruck II almost 7 years later in 2010. This sequel saw, even more, features with the Great Hall of Spins feature delivering 4 different free spin options with multipliers attached. Multipliers can reach an impressive 6x with a maximum payout of 8,000x your stake.

Almost 18 years after Thunderstruck, Microgaming decided to reboot the series with Stormcraft Studios to reboot the series entirely. In 2021, Thunderstruck Wild Lightning released and caused a huge storm. Not only did this feature the Link&Win expand the rows and retriggers, but you can also win 15,000x your stake on the fixed jackpot. There are also free spins mixed with wilds expanding to fill the reel with multipliers.

There's no denying that the Thunderstruck series has continued to reinvent itself and has stood the test of time.

It's clear that Thunderstruck is a mythical slot series that focuses on incredible wins and fantastic features. The familiar appearance of Thor and Norse mythology definitely cement this series as one that stands out.

If you love slots with amazing win potentials, then definitely check out this slot series for a terrific time and some shockingly wonderful wins.