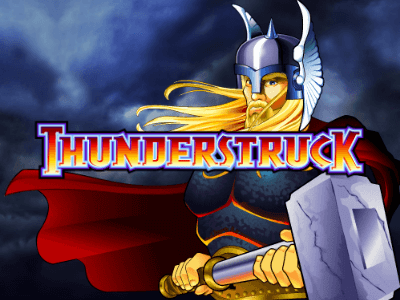 Inspired by Norse mythology, Thunderstruck follows the adventures of Thor as he tries to find the hidden treasures amongst the lightning. Thunderstruck is now a cult classic amongst the slot community and is still one of the most popular slots even amongst modern players.

There are free spins available that come with multipliers of x3 for even bigger wins. You can hope to win up to 30,000x your stake with the God of thunder on your side.

Jump straight into the action and play Thunderstruck now at the following fully licenced UK slot sites. These slot sites have been thoroughly audited and reviewed by the team here at Slot Gods to ensure they offer an exceptional user experience, are trustworthy, safe, secure, and boast the best selection of online slots in their portfolio including Thunderstruck...

Whilst there may not be a huge amount of features in Thunderstruck, the ones that are here provide incredible assistance towards big wins. The free spins feature for example can be triggered by collecting 3 or more bonus rams to trigger the feature. You can win up to 15 free spins and all wins are tripled during this feature.

This slot also features Thor acting as a wild symbol and any win with this symbol in will double your win. It substitutes all other symbols except the scatter.

Landing 3 or more bonus rams on the reels will trigger 15 free spins. Not just that, but all the wins during this mode will be tripled for even bigger wins!

Any win with the Thor symbol will act as a wild symbol and double the win! Thor substitutes all other symbols - except the scatter.

In Norse mythology, Thor is the God associated with lightning, thunder and storms. He is a brawny and honourable warrior that is known amongst the different realms. Microgaming decided that he's the perfect candidate to base a power slot game on and thus Thunderstruck was born.

Playing on 5-reels with 9 paylines, this mythical slot features free spins and wilds that have multipliers attached to increase your score even more. See if you have the luck of the Gods on your side with Thunderstruck.

The reels are in the clouds of a lightning storm - which is befitting for the God of lightning and thunder. In the middle of the screen, you'll find the reels along with the symbols attached. The images look traditionally cartoonish with clear and simple designs that just work.

Sadly, neither the background nor the symbols animate - but this was uncommon when the slot released in 2003. Despite this, the images look decent enough to deliver a good looking slot.

Unfortunately, the sound design is a little lacking with only rumbles of thunder throughout the spin. Aside from that, there is little sound or music played throughout the slot.

Thunderstruck is undemanding and effortless to play through as there are literally 6-reels and 9 paylines throughout. On top of that, you only really have two features to understand - so all you need to focus on is spinning and hopefully winning.

The spin button is to the bottom right with the bet level just to the left of it. At the left-hand side of the reels, you'll notice another menu that leads to paylines and further settings for this slot.

There's the chance to win up to 30,000x your stake and this comes from filling the reels with a Thor wild during the free spins round. Thunderstruck also has a decent RTP of 96.10% which is just over the average standard with a medium volatility level.

It's easy to see why Thunderstruck has been a fan favourite, despite being released in 2003. The gameplay is entertaining enough to provide some solid wins and the multipliers during the features improve the gameplay even more.

There's no denying that Thunderstruck is an incredible slot with brilliant win potential - and that's what it's all about. With a fantastic RTP and a payout of 30,000x your stake, you'd be a fool not to try out Thunderstruck.

Play Thunderstruck now at the following verified UK slots sites. These slot sites are fully licenced and have been thoroughly vetted and reviewed by us to ensure they offer a great user experience, are trustworthy, secure, and have a wide variety of the best online slots in their lobbies including Thunderstruck:-

Enjoyed Thunderstruck? Here's a handful of similar slots we think you'll like too. These online slots have been chosen based on features and themes similar to Thunderstruck. You might also want to check out other Microgaming slots.