Based on the hit video game series starring a squad of worms blowing up everything in sight, Worms Reloaded is a 5-reel, 20 payline slot developed by Blueprint Gaming.

This sequel is packed full of crazy features as well as randomly triggered extras. Worms Reloaded even has three progressive jackpots with Jackpot King Deluxe.

“ Worms Reloaded showcases the best features that Blueprint has to offer ”

Jump straight into the action and play Worms Reloaded now at the following fully licenced UK slot sites. These slot sites have been thoroughly audited and reviewed by the team here at Slot Gods to ensure they offer an exceptional user experience, are trustworthy, safe, secure, and boast the best selection of online slots in their portfolio including Worms Reloaded...

The sequel to Blueprint’s Worms Slot, Worms Reloaded is a sequel that is bigger and better. It has the usual A, K, J, and Q symbols, but adds 4 different weapon symbols onto the reels. Starting at the highest value weapons with red and blue rockets, you could win up to 200x your stake with these ones.

The other weapons include a shotgun and a kamikaze worm on fire, they both have the same value and max potential winning of 100x your stake. Other symbols include a Worms Reloaded and a wild symbol, both having the same values with a winning of 500x your max stake if you strike it lucky.

Worms Reloaded has two opportunities to receive free spins with Blitz Blast Free Spins and Super Sheep Free Spins. You also have the opportunity to go to a different screen along a trail in outer space to win more prizes with the Jet Pack Bonus. Similarly, you have a Battleground Bonus which allows you to accumulate cash values until you reveal a worm. All the bonuses are activated when you achieve 3 bonus symbols on reels 1,3 and 5.

If you are fortunate, you can potentially unlock one of the five bonus modifiers available to improve your game. They are triggered randomly during each spin with 3 wilds (Concrete Donkey Wilds, Banana Bomb Wilds and Bazooka Wilds), Holy Hand Grenade and Teleport Mayhem. Hold Hand Grenade will appear and explode causing additional bonus symbols to get added to the reels. This will help you get a higher chance of triggering the bonus rounds.

The game also features Blueprint Gaming’s Jackpot King Deluxe which allows you more ways to win big. Jackpot King Deluxe randomly activates during any spin to collect crowns - the more you receive, the bigger the total bet multiplier. You can pick from the King’s treasure to increase your prize, or enter the Wheel King for huge wins and the chance to win a progressive pot. Royal Pot and Regal Pot are ‘must-drop’ jackpots that must be won before reaching a value of £3,500 and £35,000 respectively. 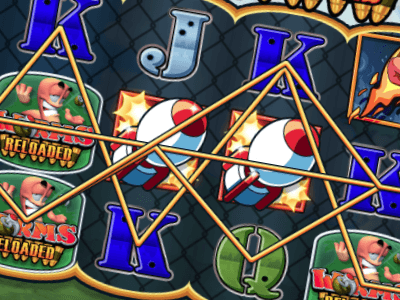 Blitz Blast Free Spins is a bonus round where a Worm is tied to a missile with a fuse lit, and the player is awarded unlimited free spins until the Worm flies off into orbit. The further the fuse goes, the higher the multiplier for any win. 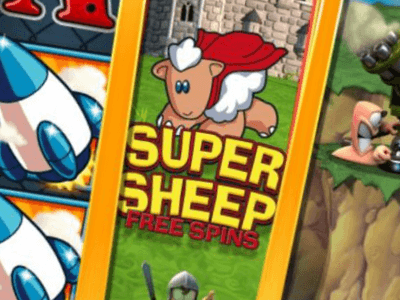 Super Sheep Free Spins give you 6 free spins and will continue until all 6 spins have played. Watch out for Worms at the side as it can shoot down the Super Sheep Wilds. At the end you’ll be presented with 3 grenades with a chance to retrigger the bonus. 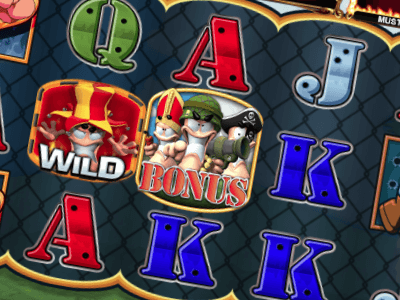 Battleground Bonus lets you pick from mines on a different screen to get other bonuses, multiplier or to finish the round. The Jet Pack Bonus is split up into two stages: Stage 1 is a multiplier trail, and Stage 2 features a Big Money multiplier round. 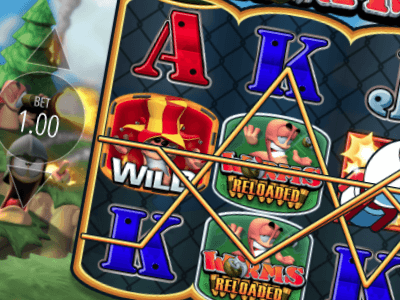 Triggered randomly, each wild adds to the bizarre experience. Concrete Donkey Wilds take over the entire reel it lands on, Banana Bomb Wilds add banana-inspired wilds anywhere onto the reels, and Bazooka Wilds just fire bazukas randomly onto the reels. 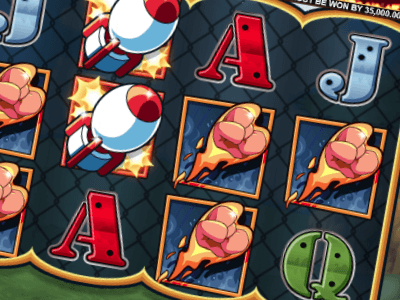 Teleport Mayhem makes the reels stop with a Worm appearing next to it. This feature will rearrange the symbols to form a winning order making it easier for you to win. 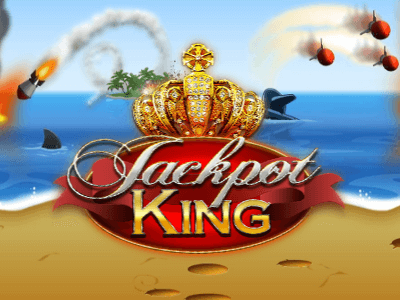 Set against a cartoonish battlefield backdrop, Worms Reloaded brings all the kookiness and delight from the rest of the series. Expect to find Worms dropping in next to the reels in order to assist or hinder your game. This gaming themed slot is a 5-reel, 20 payline game developed by the illustrious Blueprint Gaming.

With a multitude of features, modifiers and jackpots - Worms Reloaded will provide you with a wormtastic experience that’s tonnes more fun than the first game. Complete with imagery, music and sounds all inspired from the Worms’ franchise.

The game is set on a battlefield with different Worm characters all in the background with weapons. It looks almost identical to the Worm’s video game series with a similar colour scheme and character designs. This makes it feel more like a Worm’s slot rather than a bland spin-off. Unfortunately, the background has no animation and the characters only animate at certain moments which can make the game feel quite static at times.

When sounds are played from spinning the reels, it adds a lot of personality to the game making it more enjoyable. The voices are done well with each one seemingly different from the others. Despite this, the music lets down the experience. As you can imagine, the music is loud and aggressive with drum beats to emulate a battle zone. The music does seem to jump quite a bit which makes it frustrating to listen to and you may end up just muting it all together.

With the background being static, your eyes are fully focused on the reels. Some players might like this so that they can focus on their game, but it’s regretful that the developers didn’t try and do a little more to show off the Worms.

Worms Reloaded is played on 5-reels with 3 rows of symbols on 20 fixed paylines. Every spin can have either a feature, modifier or Jackpot King Deluxe if you get successful. They can either help you get free spins, stack up your multiplier or get the chance at a jackpot.

The symbols are big and easy to follow with everything clearly laid out. Instructions, guides to symbols and general sound settings are to the bottom left of the reels, whilst the spin button is to the right. Further to the left side, there is a bet adjustment button that goes between 0.20 and 100.00 - the decision is up to you.

For those of you wanting to autospin, it’s situated to the bottom right side of the screen. You can decide between 10 and 100 autospins with specific settings that ensure you don’t lose all your balance.

The game's volatility is medium, so expect steady payouts. It has an RTP of 92.66% that is below the average but makes up for it with the Jackpot King Deluxe. Worms Reloaded can see you win a maximum of 500x of your stake. It’s nothing particularly special, but the free spins and other features will be sure to help you get towards higher returns.

Worms Reloaded is definitely a slot game for fans of the video game series. It’s easy to follow and has many chances to win extra stuff with all the features and modifiers. Some may be disappointed with the lack of presentation on the slot as animations and music are sporadic - but it makes up for it with its intensive gameplay.

Blueprint Gaming’s addition of multiple free spins, modifiers and Jackpot King Deluxe make this a game that’s worth a try for both fans of the series and slot enthusiasts. Make sure to give it a ‘worm’ welcome and give it a go.

Play Worms Reloaded now at the following verified UK slots sites. These slot sites are fully licenced and have been thoroughly vetted and reviewed by us to ensure they offer a great user experience, are trustworthy, secure, and have a wide variety of the best online slots in their lobbies including Worms Reloaded:-

Enjoyed Worms Reloaded? Here's a handful of similar slots we think you'll like too. These online slots have been chosen based on features and themes similar to Worms Reloaded. You might also want to check out other Blueprint Gaming slots.