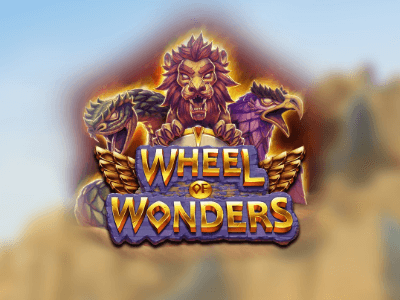 A complete twist on the Egyptian genre with a focus on mythical creatures than the gods themselves. Don’t worry, there’s still loads of treasure to uncover in the deserts of Egypt.

Playing on 6-reels, this slot can expand from 729 paylines to 46,646 throughout the playthrough. On top of that, you can win free spins, multipliers and other prizes on the two different wheels.

“ Definitely do not judge Wheel of Wonders by its appearance, as it’s a truly entertaining slot ”

Featuring wilds, free spins and multipliers, Wheel of Wonders has everything you could ever need in a slot. Unsurprisingly, this slot is all about the Ancient Wheel which can be activated by completing a row of additional positions. There are a multitude of prizes available in the wheel:

Now the slot features another wheel called the Wheel of Wonders that gives players free spins and multipliers. During the free spins round, you can retrigger extra spins:

As the name suggests, this is a wheel with different segments with random prizes. The wheel feature is awarded after a complete row of additional positions is added. Players can win bet multipliers, total multipliers and base game features to boost their playthrough.

The Ancient Wheel isn’t the only wheel on offer in the slot, as filling up all possible additional positions will unlock the Wheel of Wonders. You can win a multiplier determined by the wheel and it starts at 5x.

After activating the Wheel of Wonders, you’ll immediately be given the free spins feature afterwards. You’ll receive 5 free spins and the multiplier determined from the wheel. There’s even the potential to retrigger the free spins depending on how many symbols were in the win.

Now the Egyptian genre has begun to grow tiresome, so Push Gaming decided to create a game that focused on the mythical creatures rather than the gods themselves. Instead, the focus is on uncovering treasure hidden in archaeological digs rather than face actual mummies.

Wheel of Wonders plays on 6-reels with a base payline of 729. The entertainment comes from increasing the paylines to up to 46,646 as you gain additional positions. This combined with the two different reels and high win potential makes it a must-play.

Now the graphics look incredibly dated and tacky with the colouring of the slot. The background features blurred temples in the desert with some of the poorest looking palm trees. Perhaps, the most impressive thing about the visuals has to be that the trees are slightly animated.

The reels themselves look like they were created in the early 2000s and not 2020. It’s surprising that the reel symbols look semi decent compared to the rest of the slot. One of the worst looking Egyptian slots and a huge disappointment from Push Gaming.

As to be expected, the music isn’t anything special. It’s decent enough for the slot but the overall design of Wheel of Wonders is a let down. The whole slot design feels like a cheap cash grab into the Egyptian genre and it’s blatantly obvious.

Wheel of Wonders starts with 729 paylines and can expand up to 46,646. Wins are awarded when a combination of two or more matching symbols appear on adjacent reels meaning that there are more ways to win.

Just like in all Push Gaming slots, the important information is featured at the bottom of the reels. The spin button is to the far right of the reels with the autospin next to it giving players the potential to set up to 100 autospins.

Now, the developers claim that there is no limit of the winning potential but the highest win on the slot has been 47,233x stake. In the base game, you can win up to 40x your stake for landing 6 lion symbols but that’s about it. The big payouts come with the multipliers on the wheels which can lead to some satisfying payouts.

With the RTP being at 96.50%, it’s highly recommended to try out this slot. Of course, the volatility level is high so make sure that you have the bankroll to sustain your gameplay.

There’s no denying that this slot looks awful as the graphics are tacky and dated. However, it’s true that you shouldn’t judge a book by its cover and that is the case for this slot. Wheel of Wonders has no charm when it comes to design but the features are completely innovative. The wheels are great in gaining bonuses and the win potential is fairly high.

Play Wheel of Wonders now at the following verified online slot sites. These slot sites have been thoroughly audited and reviewed by us to ensure they offer an exceptional user experience, are trustworthy, safe, secure, and boast the best variation of online slots in their portfolio including Wheel of Wonders:-

Enjoyed Wheel of Wonders? Here's a handful of similar slots we think you'll like too. These online slots have been chosen based on features and themes similar to Wheel of Wonders. You might also want to check out other Push Gaming slots.