Twisted Sister from Play ‘N Go is set around the American heavy metal band of the same name. Twisted sister is another video slot in the famed ‘rock’ slot series from the games provider. The game is played on 6 reels and 6 rows, using cascading reels. The action-packed slot isn’t short of loud features either, this game packs in plenty with free spins, wilds, scatters and high paying multipliers.

“ Screaming with loud and rewarding gameplay! ”

Ready to rock out to some awesome tunes and rewarding features? Twisted Sister sets the stage for some brilliant bonus extras and thrilling payouts. This game shows a lot of attitude with its set of features. The features are all triggered at random and you can launch free spins with more rewarding symbols, wild scatters, generous multipliers and more. Let’s take a look at the features within the game. 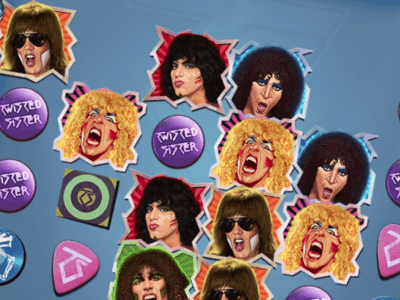 Twisted Sister uses a cascading grid so when a winning combo lands (5 or more matching symbols in a cluster), the Cascading reels come into play. This removes the winning symbols and replaces them for an increased chance of hitting successive wins. 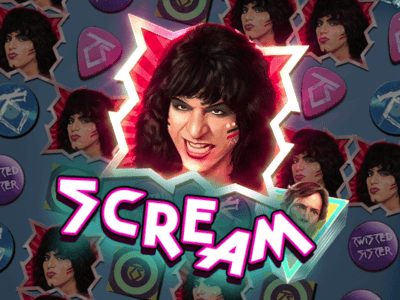 Triggered randomly after the guitar metre hits 5 notches, each winning combo featuring a band member is worth a notch. This feature destroys all surrounding non-member symbols around the selected symbols. 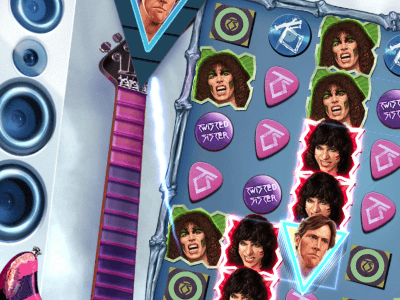 Triggered randomly after the guitar metre hits 5 notches, each winning combo featuring a band member is worth a notch. This feature transforms selected symbols into wilds. 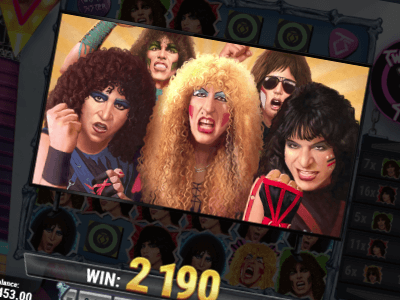 Triggered randomly after the guitar metre hits 5 notches, each winning combo featuring a band member is worth a notch. This feature transforms symbols into the selected symbols. 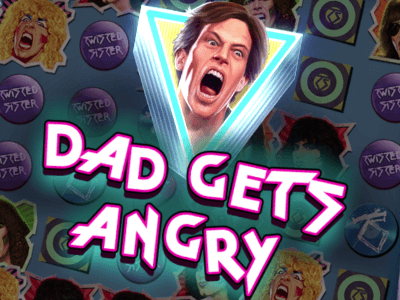 This feature is randomly triggered on a non-winning spin, adding 2 Angry Dad wild scatters to the reels, increasing the chance of triggering the We’re Not Gonna Take It feature. 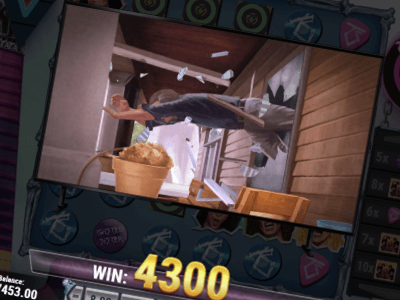 We’re Not Gonna Take It

This feature is triggered when you complete the Anger Meter by collecting 4 or more Angry Dad symbols. If you hit more than 4 symbols, the Anger Meter is overcharged and increases the win multiplier 1x each time. A 2x2 Mega Symbol is released and moves across the reels to wild scatters, forming a cluster of high paying symbols to increase the win potential.

Play'n Go’s Twisted Sister slot takes you back to the wild and rockin’ times of the much loved glam-rock band from New York. You may remember some of their classic tracks ‘I Wanna Rock’ and ‘We’re Not Gonna Take It’. This game has you rockin’ out to some awesome bonus features and nice payouts. If you’re a fan of the band, then you’ll love this slot twice as much. The heavy rock-themed slot features all the colourful band members and their fun-loving approach to rockin’ out.

Twisted Sister is not your usual setup when it comes to the slot structure. The game played across a grid with 6 rows and 6 reels. The slot features cascading reels, so any winning combinations are obliterated and replaced with new symbols, increasing the win potential for each spin. As you would expect from Play'n Go, there is no shortage of in-game features. The game packs in plenty of fun and rewarding extras including the usual spins, multipliers and wilds. You can pick up some tasty wins with 4,500x your stake up for grabs as a top win.

The visually impressive slot shouts 80s rock with the game set around speakers and an electric guitar. This one is a top pick for any slot fan, and no, you don’t have to like rock music, or Twisted Sister for that matter.

Twisted Sister was famous for their overly glammed-up appearance with big wigs and excessing makeup. The slot game channels the same energy with all the colourful band members featured on the reels. The slot grid is set around a simple set up with speaks and instruments.

The game gives off a very 80s nostalgia with its cool appearance. The symbols are guitar picks, records, buttons and of course the big-haired band members. The bright and vivid game is bursting with pinks and blues, delivering loud aesthetics to match the loud soundtrack. You will spin the reels to two of Twisted Sister’s most iconic songs (‘We’re Not Gonna Take It’ and ‘I Wanna Rock’), which provides a rocking atmosphere but can get repetitive so you may consider muted audio.

The game is incredibly energetic across the board with thrilling gameplay, excellent features and a rad appearance.

Although the game is played on a 6x6 grid with cascading reels and an Angry Dad metre, the slot is very simple to play. The game is all about forming clusters of wins to charge the guitar metre, which can randomly trigger the 3 band features. The Angry Dad Metre is charged on wild scatters and can activate more bonus features.

The game is nicely presented with the spin control vibrant and visible in the bottom right corner. Then you have the auto spins control and bet range which can be set from £0.10 to £100. The control panel also includes the information icon that provides a breakdown on the symbols and features.

Twisted Sister is a medium variance slot with a 96.20% RTP, offering a steady stream of wins. The game has plenty of opportunities to boost your balance with generous features and rewarding symbols. You can scoop an impressive 4,500x your stake which will most certainly lead to a very big win.

The Twisted Sister slot from Play'n Go does a fantastic job of channelling the vibe of the fun-loving rockers to the reels. The immersive and entertaining playing environment is complemented by some action-packed features and a cascading grid setup. The game may seem a little complicated to newbies but it’s truly a breeze to play and will only take a few spins to get used to. Wanna rock?

Play Twisted Sister now at the following verified online slot sites. These slot sites have been thoroughly audited and reviewed by us to ensure they offer an exceptional user experience, are trustworthy, safe, secure, and boast the best variation of online slots in their portfolio including Twisted Sister:-

Enjoyed Twisted Sister? Here's a handful of similar slots we think you'll like too. These online slots have been chosen based on features and themes similar to Twisted Sister. You might also want to check out other Play'n GO slots.