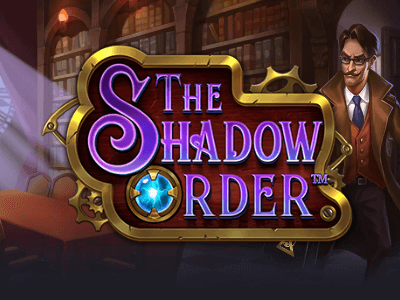 The Shadow Order is a secret society and it’s up to you to uncover the hidden everything they’ve been hiding to find their treasure. Enter the mysterious world of confidential codes and unlock the mysteries of the world.

Developed by Push Gaming, The Shadow Order utilises the cascading reel win system with loads of extras to help you on your adventure. There are 4 different characters to help you along with orb symbols to help you win the maximum of 25,471x your stake.

Jump straight into the action and play The Shadow Order now at the following fully licenced UK slot sites. These slot sites have been thoroughly audited and reviewed by the team here at Slot Gods to ensure they offer an exceptional user experience, are trustworthy, safe, secure, and boast the best selection of online slots in their portfolio including The Shadow Order...

The Shadow Order boasts a huge range of features that can help improve your gameplay. Naturally, there are order medals and orbs that count towards wild and can substitute any symbol except the orbs themselves.

Amazingly, there are 3 different orb symbols that can be activated after fully charging cascades. There are 3 orb symbols that sit above the grid and become active after fully charging cascades. They can act as wilds, and if an orb symbol lands in a hotspot, then the orb symbol’s respective feature will trigger when there are no more cascades. Characters 2, 3 and 4 are unlockable by collecting Ring symbols and these symbols build up the meter. As the meter grows, it will reveal a regular symbol underneath that will unlock new characters. This feature can be triggered randomly at the end of the game round. Each of the characters have specific backstories and abilities that can assist you in your quest to solve the mystery and find the treasure. Enter the hidden world of The Shadow Order and uncover all the secrets of the world in this espionage mission. Once you managed to get in and decipher the codes, you could win up to 25,471x your stake.

Using the cascading win system instead of traditional reels, The Shadow Order is developed by Push Gaming. It plays on a 5x5 grid and has an RTP rate of 96.48%. Dive into The Shadow Order as there’s literally no other adventure slot like this one.

From the offset, it’s clear that so much creativity has gone into the design of this slot. In the background of the reels, there is a huge mansion adorned with expensive shrubbery and fountains with a confusing maze in the middle.

To the right of the reels is one of the characters, which will usually be the starting character of Molly. She is animated with her loyal dove sidekick next to her. It looks incredibly impressive and each character has their own mannerisms to make them stand out.

Naturally with the slot focusing on secret societies, most of the symbols are related to this. With chess pieces, mystery books and time rings to name a few, Push Gaming sure put a lot of effort into building up the atmosphere even more.

Thankfully, the music does not let down the design at all. With eerie and sinister music with the theme of suspense in the subtext. You can tell immediately that this is an espionage mission that requires care. Violins contrasted with percussion create something that is straight out of a Hollywood movie. What’s even better is that it plays throughout to build up the tension even more.

Like most Push Gaming slots, all the important information and settings can be found at the bottom of the reels. Bet level, sound settings and autospin can be all located at the bottom. The spin button is to the far right of the reels next to the autospin. Players can set between 10 and 100 autospins through this setting.

Now, The Shadow Order is not your traditional slot. It instead uses the cascading reel system in which you match symbols and the symbols from the previous rond are removed from the game. Don't worry about it being complicated as it’s relatively straight forward. The same goes for the features as everything is explained and easy to pick up.

Players will be elated to know that the RTP of this slot is 96.48% which is incredibly high for an online slot. The Shadow Order has a medium volatility level so you can expect a combination of low and high volatility payouts which is perfect for players who are unsure of which style they prefer.

Now, the biggest win in the game is reported at 25,471x your stake by the developers which can be achieved through the free spins with the increasing multiplier, characters and the orbs. You can expect to win 300x your stake with 5 matching wild symbols in the base game but that’s about it until you unlock more features.

We can’t think of any other adventure slot on our site that does what The Shadow Order does. It’s thoroughly engaging with the world it's created with the characters and design. To make it even better, the features are diverse enough to provide you with everything you need.

There’s no denying that it looks cool and plays out like a spy movie. Of course, the high RTP and decent payout makes it a slot that’s even more appealing. The only downside to this slot is perhaps the difficulty of obtaining other characters, so be aware that you may have Molly for a long time. If you put this aside, The Shadow Order is a solid game that is worth your attention.

Play The Shadow Order now at the following verified UK slots sites. These slot sites are fully licenced and have been thoroughly vetted and reviewed by us to ensure they offer a great user experience, are trustworthy, secure, and have a wide variety of the best online slots in their lobbies including The Shadow Order:-

Enjoyed The Shadow Order? Here's a handful of similar slots we think you'll like too. These online slots have been chosen based on features and themes similar to The Shadow Order. You might also want to check out other Push Gaming slots.