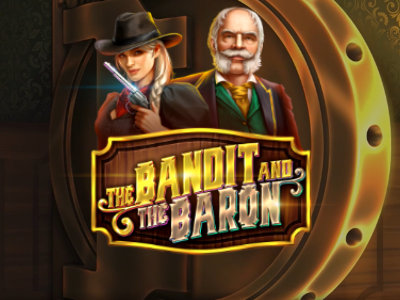 The Bandit and the Baron

An infamous bandit is on the run and she's taken the Baron hostage in this Wild West adventure. Developed by Just For The Win, The Bandit and the Baron is a Link & Win slot that plays on 5-reels with 25 paylines.

With expanding wilds and the wonderful Link & Win respin feature, you'll be winning large amounts of up to 25,000x your stake in no time. Just make sure that you stay on the Bandit's good side and you'll have no problems.

The Bandit and the Baron Screenshots

The Bandit and the Baron Features

If you land a 1x1 wild, it'll expand to become a full reel Baron Wild. Alongside that, you can trigger the Link & Win feature by landing Bandit symbols on reels 1, 3 and 5.

In the base game, wild expansions and Bandit Respins are there modifying the action, climaxing in a bought or triggered Bandit Bonus round. You'll be taken to a bank vault and given 3 respins. Each time you land a symbol the respins reset to 3.

During this mode, you can land cash symbols, key symbols (unlocking spaces) and upgrade symbols (multiply cash symbols). This continues until there are no more respins left, the spaces are filled or you've reached the win cap.

You can also trigger Bandit Respins by landing 2 Bandit symbols on reels 1, 3 or 5. They hold in place for one spin with the bonus symbols remaining locked. This gives you the chance to trigger the Link & Win feature. 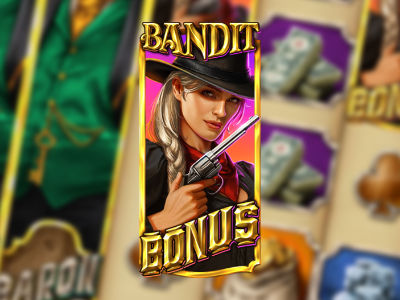 If you land Bandit symbols on reels 1, 3 and 5, then you'll trigger the Link & Win feature that gives out 3 respins and holds symbols in place. 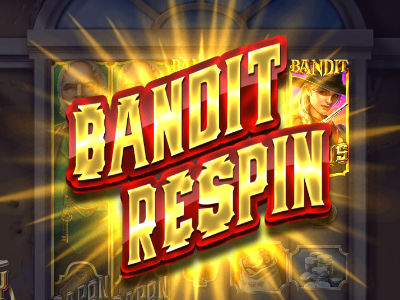 It's not always easy to trigger the bonus, so there's an additional feature to help you. If you land 2 Bandit symbols on reels 1,3 or 5, then they'll hold in place and respin.

The Bandit and the Baron Review

If you are a seasoned player, then you'll know that Wild West slots are extremely popular but the market is beginning to feel oversaturated with the same stories. This is why Just For The Win decided to focus on a female bandit who teams up with a reluctant baron in The Bandit and the Baron.

This slot plays on 5-reels with 25 paylines - but features the impressive Link & Win mechanic that respins and resets with every symbol. If you are looking for a western unlike any other, give check out The Bandit and the Baron.

The minute you open up this slot, you'll notice that it takes place on a wanted poster surrounded by various buildings themed in the style of the Wild West. Overall, the designs look clean and make you feel like you have been transported to the Wild West.

You have the Bandit and the Baron as characters that look like you'd expect with the Bandit being a sassy gunslinger and the Baron being a pompous rich guy. These paired with the symbols of cash on the reels definitely work together in giving you a heist experience.

As you can imagine, the music is typically Western with drums and whistles sounding similar to the Ennio Morricone soundtracks you'd find in spaghetti westerns. Occasionally, you'll hear the Bandit and the Baron make quips but it wasn't as much as we'd like. The biggest disappointment has to be the lack of story for these characters as we'd love to see something like Immortal Romance.

In the core gameplay, you'll find it straightforward with nothing too complicated. The same goes for the respin feature as it's all explained pretty well with a pop-up.

Most of the buttons you'll need are to the right side of the screen where you can set your bet and spin. The only issue we encountered was the sound messing up a few times but just reset the sound here to fix any issues like that.

The RTP is a fair amount at 96.09% that is just over the average standard. In this slot, you'll also find high volatility leading to larger wins at a less frequent rate to low volatility slots.

There is a spectacular maximum win of 25,000x your stake that can be reached through the Link & Win feature. Non-UK players can buy the feature, but UK players will have to trigger it the old fashioned way.

On the surface, The Bandit and the Baron gave us a lot and delivered solid gameplay. However, we were expecting some kind of cutscene or story to give an insight into these interesting characters and how they started working together.

If you are here just for amazing gameplay paired with thrilling features and wins - then The Bandit and the Baron is for you.

Play The Bandit and the Baron