Temple Tumble Megaways is Relax Gaming's first attempt at creating a Megaways slot, and we have to say they've done a truly fantastic job. This wonderfully designed 6x6 clusters pays slot features three different free spin bonuses and cascading symbols that make way for new ones after each and every win.

Jump straight into the action and play Temple Tumble Megaways now at the following fully licenced UK slot sites. These slot sites have been thoroughly audited and reviewed by the team here at Slot Gods to ensure they offer an exceptional user experience, are trustworthy, safe, secure, and boast the best selection of online slots in their portfolio including Temple Tumble Megaways...

The aim of the game with Temple Tumble Megaways is to successfully trigger winning combinations so that see the stone blocks on the grid are removed from the game. Once all of the stone blocks are gone then the game's free spin bonus is automatically triggered. Before players can receive their 6 free spins they must first pick one of three choices: 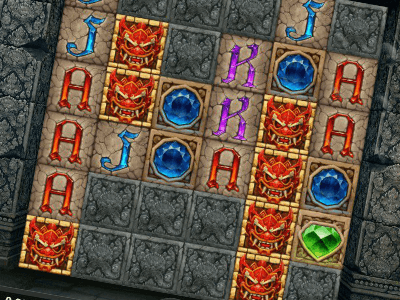 The reels tumble from the top of the game grid and fall into place in a different order on each spin. When winning combinations are formed, new symbols fall in to take their place. 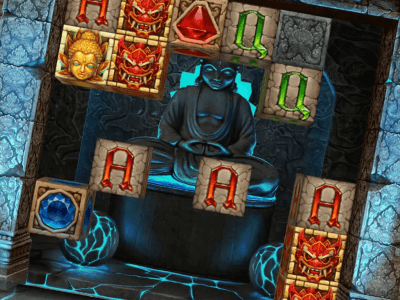 Once all of the game's stone blocks have been cleared from the grid via a chain reaction of wins, players can choose from three different highly lucrative free spin bonuses.

Temple Tumble Megaways is a unique slot played on a 6x6 grid that sees symbols cascade onto the screen, smashing stone symbols after each and every win to allow more paylines into play. Being a Megaways slot, players can unlock a healthy number of paylines as they go along, 46,656 in total.

Relax Gaming pretty much sets the scene for players from the get-go, the game opens with a dramatic cinematic intro video that sees the game's brave hero work his way through a dangerous jungle in search of a temple full of untold riches. Upon arriving at the temple the game kicks in.

The reels are set upon the exterior wall of a great stone temple, behind them, thick fog slowly rolls by, partly obscuring lush green trees, tangled roots and a large carved stone head. The reels are adorned with symbols that aren't particularly linked to the  Inca empires (which is the era we assume the game is set in). High paying symbols are what look like a statue depicting a golden Indian god's head, a Chinese dragon, a red gem, blue gem and green gem, it does feel a little bit messy! Low paying symbols are your standard J, Q, K, A.

It's fair to say Relax Gaming has designed a fantastic looking slot, and they've done a pretty good job on the sound as well. If you listen carefully when you're not spinning the reels you'll be able to hear a fire crackle, birds squark and the wind gently blow, it's all very impressive.

Upon spinning the reels you'll be treated to a gentle tune and the sound of the stones smashing into each other and cracking and sliding off the grid whenever a winning cluster is registered.

We're genuinely really impressed with the work Relax Gaming have done to make this slot look and sound great (which is why we chose to rate it so highly), but we do have to question some of the theming, there's a few nods to Indian and Chinese culture here and there, and it doesn't seem to fit.

Temple Tumble is a little bit different from your average cascading slot. each spin sees the symbols fall onto the game grid in a completely different order, with a large number of the symbols blocked out by stone. Whenever a winning combination is triggered some of the stones are removed. When all of the stones are gone players will trigger a bonus round.

In terms of navigating the slot, it couldn't be simpler. All the buttons players will need are on the far right-hand side of the screen including the stake button (which can see players bet between 0.20 and 20) and the autospin button (which can see players set infinite spins). The menus aren't as polished as other games, but ultimately it's a menu and it's not going to make-or-break our gameplay.

This atmospheric slot has a slightly above average RTP of 96.25% and an alright maximum win potential of 7,767x the player's initial stake, so we really cannot complain much at all! However, it is worth noting that Temple Tumble Megaways is a highly volatile slot, so you're going to need to have the bankroll to sustain your gameplay if you want to get something out of this. If you have less money to play with and are looking for something a little bit softer then perhaps seek out a game with medium or low volatility.

Temple Tumble is a fantastic online slot from a talented development studio that deserves credit for thinking outside of the box and creating something that's a little bit different from the rest. If you're patient and have a big enough bankroll to sustain your gameplay then this really is a great choice, even if the win potential is a little bit lower than we'd have wanted for a modern Megaways slot.

Play Temple Tumble Megaways now at the following verified UK slots sites. These slot sites are fully licenced and have been thoroughly vetted and reviewed by us to ensure they offer a great user experience, are trustworthy, secure, and have a wide variety of the best online slots in their lobbies including Temple Tumble Megaways:-