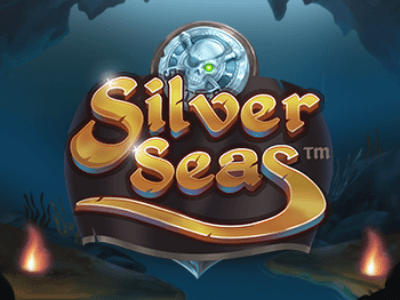 A pirate-themed slot with a focus on collecting the booty! Developed by Gold Coin Studios and published by Microgaming, Silver Seas plays on 5-reels with 20 paylines.

Filled with cannons, cutlasses, doubloons, bottles of rum and everything you could ever want in a pirate slot. There's a free spins wheel with up to 30 free spins and a 3x multiplier that could get you to 6,000x your stake!

In Silver Seas, players join a mighty crew to try and score the juiciest of booty. It features free spins with multipliers, scatters and wilds to keep the staples within online slots.

The biggest win in this slot can come from landing 9 of the skull scatters which will award up to 2,000x your stake. Other payouts include the wild at 125x your stake, the gold cannon at 37.5x your stake and the silver cannon being worth up to 20x your stake. Naturally, these can increase by landing the multiplier through free spins at 3x.

The free spins symbol is represented by a boat with the initials 'FS' on it. Landing these symbols on reels 2, 3 and 4 will activate the free spins wheel.

Instead of triggering free spins, the coin scatter actually awards an instant cash prize. Landing 3 or more of the skull scatters can award players up to 2,000x their stake.

Microgaming's Gold Coin Studios decided to release their own pirate slot to create a wonderful adventure in which players search for their own juicy booty. Silver Seas plays on 5-reels with 20 paylines with a solid RTP at 96.24%.

The highlights of this slot include a free spins wheel that can award players up to 30 free spins with a 3x multiplier alongside skulls scatters that award instant cash prizes of up to 2,000x your stake. So prepare your parrot, grab your eye patch and prepare for a pirate voyage unlike any other.

In the world of Silver Seas, the background is set to a hidden skull caving containing treasure. There are fire pits to light up the cave with these being animated. The reels themselves contain various symbols associated with pirates such as cutlass swords and canons.

Once these symbols are collected in a win, they animate on the reels and add ambient sounds. For example, when you land on the canons, they fire on the screen and release a loud bang. It all combines to create a full experience that pirate fans will definitely enjoy.

As expected, the music is reminiscent of the Pirates of the Caribbean film series with violins and drums to create an epic score. There are ambient sounds such as bombs and gunshots throughout the slot to enhance the slot even more.

There isn't anything complicated about this slot and anyone should be able to pick up and play. The left of the screen highlights the level of skull scatters landed to show you exactly how much you have won. Other than that, the rest of the slot is pretty much just like any other.

All the relevant gameplay settings are to the right of the reels with the spin button in the middle. Alongside it, you can find up to 100 autospins with the bet level. Thankfully, most of the slot is self-explanatory and is perfect for newcomers to slots.

During our playthrough, we found ourselves winning fairly frequently and activating the free spins wheel fairly often. Of course, this isn't representative for every playthrough but we found the return decent. The stated RTP of the slot is 96.24% with a medium volatility level which is basically what we experienced.

The biggest payout in the main game comes from landing 9 of the scatters which can lead to 2,000x your stake. Of course, you can receive the maximum total in the whole slot by landing this combination during free spins with a 3x multiplier.

Pirate slots are generally hit and miss but Silver Seas is all hit. It's brilliantly designed with visually stimulating icons mixed with a vibrant soundtrack. The gameplay itself is fun with the free spins wheel being incredibly appeal.

You'd think that it would lessen when we'd get towards the win potential, but it's a knock-out there. Granted, it's a medium volatility slot but the RTP at 96.24% mixed with the maximum payout of 6,000x your stake is amazing. Silver Seas is definitely worth a spin, so set sail and join the crew.

Play Silver Seas now at the following verified online slot sites. These slot sites have been thoroughly audited and reviewed by us to ensure they offer an exceptional user experience, are trustworthy, safe, secure, and boast the best variation of online slots in their portfolio including Silver Seas:-

Enjoyed Silver Seas? Here's a handful of similar slots we think you'll like too. These online slots have been chosen based on features and themes similar to Silver Seas. You might also want to check out other Microgaming slots.