Rich Wilde and the Pearls of India

Take a daring trip deep into the heart of the Indian mountains with iconic adventurer Rich Wilde in what is the second instalment of this timeless online slot series from developers Play’n GO. This 5-reel, 20 payline slot offers players the opportunity to win 10,000x their initial stake.

Rich Wilde and the Pearls of India Features

Much to our delight Rich Wilde and the Pearls of India comes with quite a few bonus features and mechanics, so if you’re looking for a game that has that little bit extra then this is most certainly the one for you.

The base game comes with increasing multipliers and a gamble feature that allows you to guess the outcome of a playing card (either by colour or suit) to boost your overall winnings. Of course this comes with an element of risk as you could lose all your winnings with an incorrect guess.

If you collect a total of 25 temple symbols during the base game, filling up a bonus meter in the process you’ll launch one of 3 bonus mini-games.

Of course, the most important feature in Rich Wilde and the Pearls of India is the free spins feature. If you can manage to land 3 pearl scatter symbols on the middle 3 reels then you’ll receive 10 free spins with an increasing multiplier that initially reaches 10x.

If you collect pearls during the free spin round then you’ll be awarded with additional free spins (a maximum of 20) and much higher multipliers that could reach as high as 50x. 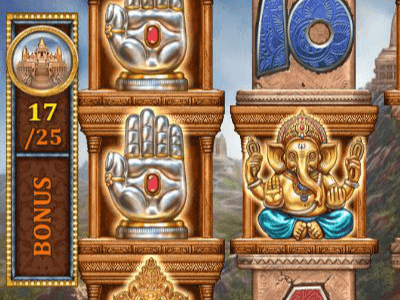 If you collect 25 temple symbols during the base game, filling up a bonus meter you’ll launch one of 3 bonus mini-games the Statue of Vishnu, Wheel of Brahma or the Wall of Shiva. 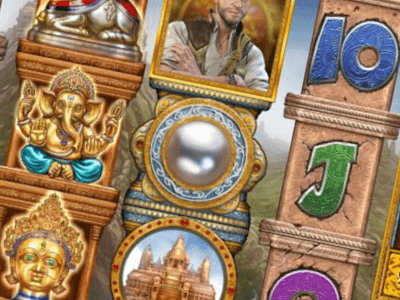 Rich Wilde and the Pearls of India Review

Rich Wilde and the Pearls of India is the second instalment in the iconic adventurer’s series of online slot games developed by Play’n GO. This slot sees Wilde leave South America behind in favour of the atmospheric jungles and mountaintops of India where untold riches await.

As if with any game in the Rich Wilde series, there’s no shortage of interesting mechanics and bonus features to keep your attention. With bonus mini-games, multipliers and free spins there’s more than enough to keep any slots enthusiast satisfied for the most part.

It has been suggested that Rich Wilde and the Pearls of India perhaps takes a little too much inspiration from a number of iconic slots (most notably Gonzo’s Quest) throwing all of their best features together into one game, but if we’re being honest we can’t really complain about that!

Rich Wilde and the Pearls of India looks absolutely fantastic, the reels are set in front of a beautiful Indian temple nestled high up in the mountains. The atmospheric music is serene and feels like something you would listen to when meditating, however once you rack up a few wins something a little bit more upbeat plays with drums and pipes willing you on.

The reels themselves are adorned with symbols related to Indian culture and Hinduism such as Ganesha, the sacred cow and the Hand of Protection. Other symbols include Rich Wilde and your generic 10, A, J, K and Q.

There’s no denying that Rich Wilde and the Pearls of India takes inspiration from many other online slot games, with cascading reels falling from the sky and into place and a multiplier that increases as consecutive wins are registered.

At first, it does seem like the game has quite a lot going on, but once you’ve played a small handful of spins and you’ve worked out each and every element then you’ll thoroughly enjoy what Pearls of India has to offer.

The game allows players to bet between £0.20 and £100, which is fair in our eyes as it caters to both those using a small bankroll and those hunting for much larger wins. With a pretty decent RTP of 96.87%, medium volatility and a maximum win of 10,000x your initial stake then we certainly can’t turn our nose up at this title at all.

Rich Wilde and the Pearls of India certainly isn’t the best title in the Riche Wilde series, but that’s not to say it doesn’t have plenty to offer players with a whole host of excellent bonus features and mechanics.

It’s often overlooked by many players in favour of newer, flashier titles. But if you can get a good run going with the bonuses and multipliers when playing this slot then we can guarantee you’ll never look back!

Play Rich Wilde and the Pearls of India