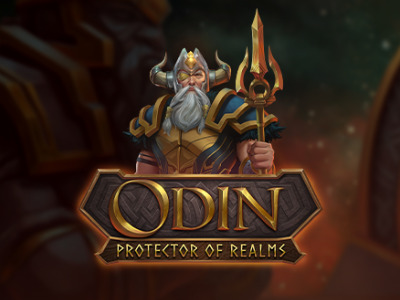 Asgard is under attack and the rest of the Gods are scattered across the realms - it's up to Odin to protect Asgard. You must help him to seal the hexagon gate to banish the evil that is coming.

Developed by Play'n GO, Odin Protector of Realms is a mythical slot that plays on a hexagonal grid and wins are formed through clusters. You must build up the Ring Meter through wins to activate the Gold Forge and protect Asgard for good.

“ A Frigg'n fantastic slot that's too epic to miss ”

The goal of Odin Protector of Realms is to seal the hexagonal gate - which can only be done by charging the Ring Meter. When you land winning clusters, the Ring Meter is filled and each of the three rings opens up even more clusters.

There are three rings and these include:

Aside from the rings, Odin has special powers that can be activated randomly at any time. These powers include:

There are three different rings and these are activated by reaching a certain amount of cluster wins. Each of the features increases the number of clusters you can win. 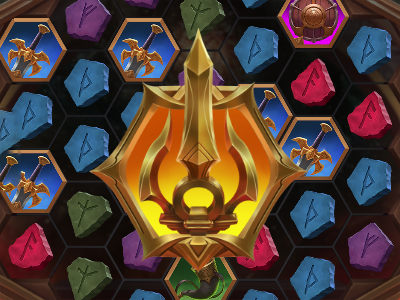 During any random moment, Odin can grant one of three different powers. These include upgrading central symbols, destroying 2 types of symbols and adding random wilds.

There is utter chaos on Asgard and all of the other Gods are scattered across the realms - so it's up to Odin to protect Asgard. You can help him seal the hexagonal gate to seal away the evil and keep the people of Asgard protected - of course Odin will reward you handsomely for helping him out.

Developed by Play'n Go, Odin Protector of Realms plays on a hexagonal grid that matches up clusters of at least 5 for wins - it's essentially a form of Cluster Pays. This mythical slot focuses on the Forged Rings and Odin's powers to help you secure wins of up to 5,000x your stake.

As the slot opens up, a cinematic introduces the story with Odin narrating over it. It's only a few seconds but shows greater attention to detail by creating a fully realised world for this slot. After the opening cinematic, you'll notice that the slot is set at the cornerstone of the Rainbow Bridge with Odin guarding the hexagonal gate.

In the distance, you'll notice a beautiful looking animated image of space with stars twinkling along with statutes of Heimdall guarding the gate at each side. Odin is standing proud in his gear and with his weapon as he prepares to protect the people of Asgard.

The character of Odin looks grand and like something you'd see in a painting - there's just so much detail in his costume. He is adorned in gold and blue with his trademark golden eyepatch for extra detail.

There are various runes and symbols relating to Norse mythology on the reels with all of the symbols looking tasteful and detailed. Each of the symbols matches with the visuals and it's incredible to see them drop in.

As for the music, there's an epic score with violins and drums to create something dramatic. You'll notice Odin commenting on the situation throughout spins and providing inspirational quotes as you spin making Odin seem more like a lively character rather than a lifeless mascot.

Odin Protector of Realms has a Cluster Pays system that matches up symbols of at least 5 to form wins. All you need to do is match up symbols and build up the ring meter for even bigger wins. Despite seeming complicated, the gameplay is straightforward and easy to pick up.

All of the needed menus can be found at the bottom of the screen with the spin button to the far right and the autospin and bet level just next to it. If you move further to the left, you'll notice a further drop-down menu for additional settings and information.

Thankfully, the RTP is at a decent 96.20% so the theoretical return is pretty decent. Odin Protector of Realms is a medium volatility slot that can deliver wins of up to 5,000x your stake through the Gold Ring and Odin's powers.

Whilst 5,000x your stake may be quite low for an online slot, you can bet up to 100.00 meaning that wins could reach higher levels but this is dependant on having the bankroll to sustain this sort of gameplay.

There's no denying that Play'n GO have created something utterly spectacular with this slot and you can't help but appreciate the stunning visuals. Even the gameplay fits in well and is something completely different whilst being easy to pick up.

Of course, the biggest problem comes with the maximum payout which is only 5,000x your stake - which means that there won't be any earth-shattering wins unless you stake the maximum. Don't let that completely put you off this slot, as it's definitely worth a spin to see the hexagonal grid and Odin in action.