Nyjah Huston Skate for Gold is a unique 5-reel, 10 payline branded slot developed by Play'n GO. It plays host to some decent bonus features and mechanics that transport players back to the early 2000s when skateboarding games reigned supreme! With a maximum win of 5,000x your initial stake, it's not hard to see why this slot has proven popular!

“ A rad experience not to be missed by any skate fan ”

Jump straight into the action and play Nyjah Huston Skate for Gold now at the following fully licenced UK slot sites. These slot sites have been thoroughly audited and reviewed by the team here at Slot Gods to ensure they offer an exceptional user experience, are trustworthy, safe, secure, and boast the best selection of online slots in their portfolio including Nyjah Huston Skate for Gold...

As far as features are concerned Nyjah Huston Skate for Gold is simple, yet quite novel. During the base game a combo meter can randomly activate, this meter displays a trio of trick symbols at the top of the reels that players must land on the reels in order to trigger a wildboard re-spin.

When a wildboard re-spin triggers a skateboard symbol will expand and cover an entire reel and act as a wild. These skateboards can turn gold which means wins come with a 10x multiplier.

Rather than landing a set number of scatter symbols across the reels, Skate for Gold demands that players spell the word SKATE across the reels from left to right in order to unlock free spins.

Initially, players receive 12 free spins, however, 2 more can be gained by getting the correct combo of symbols as dictated by the combo meter, which is always active during the bonus. 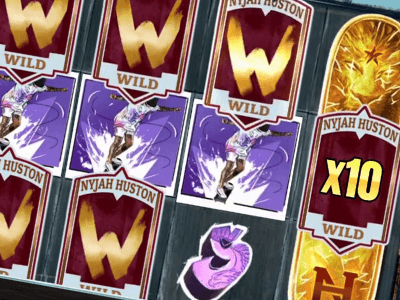 Players can fill a combo meter by landing the correct symbols on the reels. Once this meter is full it will trigger a wildboard re-spin which sees a skateboard wild symbol expand across an entire reel.  These wild can turn gold, causing wins to be multiplied by up to 10x. 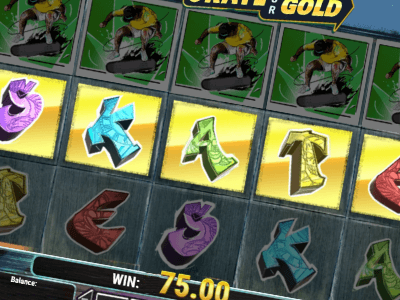 If players can spell the word SKATE across the reels from left to right then they'll trigger 12 free spins. More free spins can be unlocked if the combo of symbols lands on the reels.

Picture the scene… It’s the early 2000s, skateboarding dominates mainstream culture, every city has a gang of skaters tearing up the city streets, every gamer has a copy of Tony Hawk’s Pro Skater on their Playstation 1 and pro-skateboarders are just as famous as football players.

These were good times, and online slot developer Play’n GO has decided to tap into that sweet sweet nostalgia with their 2020 branded slot Nyjah Huston Skate for Gold. If you haven’t already guessed, this 5-reel, 10 payline slot is centred around 6-time World Champion skateboarder Nyjah Huston, the world’s highest-paid skateboarder.

This gritty slot has plenty of nods back to old-school skateboarding video game mechanics and looks and sounds exactly as you’d expect from a skateboarding themed game.

Nyjah Huston Skate for Gold is a strange one for us, on one hand, this online slot looks and sounds just as we expected, with a pop-punk electric guitar riff playing in the background and reels are adorned with stylised drawings of Nyjah and symbols drawn in spray-paint graffiti.

There’s no denying that this slot looks good, especially when Nyjah skates across the screen, but it does feel a little bit cliche, forced and far too cheerful. It’s just a little bit too bright for our liking and airy and not very punk rock.

Nyjah Huston himself is Californian, and the scene behind the reels is a beachside skateboard being baked by the sun, so perhaps that’s the vibe Play’n Go have gone for? Maybe we’re stuck in the early 2000s and pining to that nostalgia, but we don’t remember skateboarding culture being so bright and colourful, perhaps times have changed?

Low paying symbols in this slot are letters (S, K, A, T, E) and higher-paying symbols are images of Nyjah Huston doing various tricks on his board. Both sets of symbols have an important role to play with regards to bonus features.

Nyjah Huston Skate for Gold is a good game played a standard 5x3 layout with 10 paylines, it’s not game-changing, nor are there any mechanics that absolutely blew us away, but ultimately we had fun playing it.

Truth be told, the slot is a little tedious when spinning the reels on the base game, but it really does pick up during the free spins and whenever the wildboard re-spins come into play.

As far as branded slots go Nyjah Huston might not be the strongest name going, but when have Play’n GO ever gone for the big names? The popular Swedish developers have made a strong name for themselves releasing branded slots based on Niche personalities and bands.

This low to medium volatility slot has an average RTP of 96.20% and a maximum win of 5,000x your initial bet. Considering this game allows for a generous betting range we’d say this slot is accessible to most players, regardless of budget… However, you should expect to play for some time until a big win is registered.

Nyjah Huston Skate for Gold is a solid online slot game, that will be enjoyed by a handful of players that are enthusiastic about both slots and skateboarding, however, there’s no denying that Nyjah Huston isn’t really the biggest name out there. This, coupled with the low volatility of the slot means it’s not going to be the first choice for serious players.

All in all, it’s a very good novelty slot that’s worth a handful of spins, especially if you’re into skateboarding... But if you’re expecting bigger things then perhaps look elsewhere.