True to form, NetEnt has packed three fantastic feature into this slot, all of which proved to be pretty lucrative when we gave the game a spin ourselves! These features are as follows: 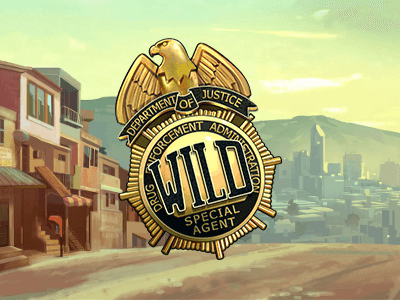 Walking Wilds are wild symbols can be triggered randomly at any time. Once one has appeared and formed a winning payline it will stay on the game screen and shift horizontally one reel to the left as many times as required before leaving the game reels altogether. 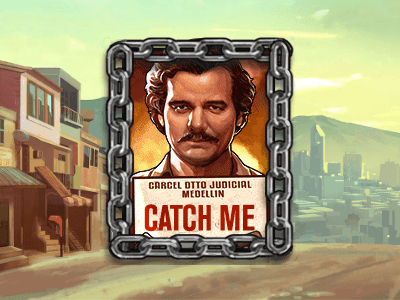 The Locked Up feature is triggered when 3 Pablo Escobar scatter symbols appear together on the same row. Players receive 3 free spins in which only Locked Up and golden Locked Up symbols appear. The more symbols that align with the original winning cluster increases the size of the players overall win. 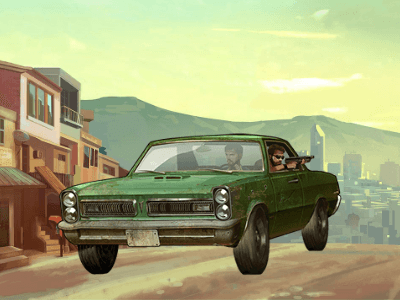 The Drive-by feature can be triggered at any time during the base game. The reels will disappear and a green car driven by Agent Pena will dramatically come speeding up the road whilst Agent Murphy shoots bullets across the street. These bullets will go into slow motion as they pass the reels (Matrix style!) and hit a number of symbols, causing them to turn into high-paying symbols. 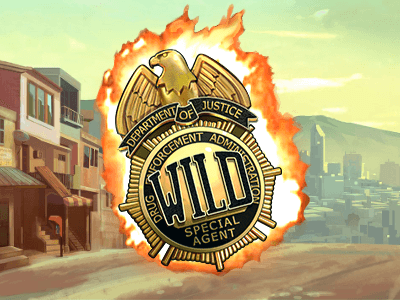 If players land 3 Car Free Spin scatter symbols anywhere on reels 1, 3 and 5 then they’ll automatically trigger 10 free spins. As each free spin happens there is an increasing chance that one or more high-value symbols will turn wild and walking wilds. If there any walking wilds left on the reels at the end of the spins additional spins will be awarded until the wild has gone.

When NetEnt acquired the rights to create an online slot game based on hit television show Narcos it opened the door for other development studios to take a risk by licensing big-name shows in the hope that they’d resonate with online slots fans…It would be fair to suggest NetEnt certainly made the right move here.

Since being released in the Summer of 2019 Narcos Video Slot has proved to be an absolutely massive hit with everyone that has given this wonderfully-designed branded slot a spin!

Filled with references to the hugely popular show and thrilling bonus features there’s absolutely no reason why you shouldn’t try this brilliant NetEnt slot out for yourself.

We thoroughly believe NetEnt should throw all the money at the design team behind Narcos Video Slot because they’ve done a truly spectacular job with this gorgeous online slot.

Once you’ve loaded up and arrived at the main screen you’ll be greeted by soft, ominous Latin music that plays throughout the duration of your gameplay. It’s such a small detail but it really does help set the scene and make us feel like we’re right there in 1970s Medellín.

Behind the reels is a beautifully drawn city skyline basked in warm sunlight. Every so often a chilling wind will pick up, blowing dust across the empty road. Other times you might catch a plane flying across the sky… It remains to be seen whether this plane is in search of Escobar and his notorious Cartel, or whether it’s his henchman transporting drugs into the United States.

Another nice design feature that deserves a mention in this review is the spin button. Rather than opt for a standard button featuring the word spin NetEnt have designed it to look like the revolver chamber of a gun, every time the reels are spun the chamber spins as well.

Low paying symbols in this game are J, Q, A and K (all surrounded by weapons and money) whilst the high paying symbols include a plane, a flamingo, drug lord José Gacha, Connie Murphy, DEA Agent Stephen Murphy and DEA Agent Javier Pena. The wild symbol is represented by a DEA badge.

Narcos Videoslot is a medium to high volatility slot that offers 96.23% RTP which is fair in our eyes as it sits around the industry average. Unfortunately, the only thing that really lets this stunning slot down is the win potential. Players can only win a maximum of 1,506x their initial stake, which is pretty low for a modern online slot.

When has NetEnt ever gotten it wrong? These guys don’t often mess things up, and this is true with Narcos Video Slot… Looking past the somewhat low maximum win we have to say that this title is worthy of huge praise, it looks, sounds and plays brilliantly. If you’re after a truly enjoyable branded online slot then this should be near the very top of the list.

Play Narcos now at the following verified online slot sites. These slot sites have been thoroughly audited and reviewed by us to ensure they offer an exceptional user experience, are trustworthy, safe, secure, and boast the best variation of online slots in their portfolio including Narcos:-

Enjoyed Narcos? Here's a handful of similar slots we think you'll like too. These online slots have been chosen based on features and themes similar to Narcos. You might also want to check out other NetEnt slots.