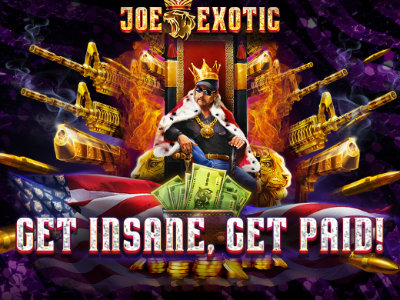 The world was taken by the storm that is Joe Exotic as everyone was exposed to his crazy and colourful world. Naturally, Red Tiger Gaming thought the same and decided to give Joe Exotic his own slot.

Describing himself as a "gay-gun-toting cowboy with a mullet", the Joe Exotic slot promises to be as bonkers and bizarre as the legend himself. So enter this wonderfully weird slot that promises no Carole Baskin!

For a slot based on the infamous Tiger King himself, Joe Exotic has a multitude of features. Starting with the Exotic Spins, this is ultimately triggered by landing exotic spin symbols on reels 1, 3 and 5. You win 9 free spins and there is a 1x3 Joe Exotic Super Multiplier Wild on the third reel that sticks throughout the bonus.

The multiplier increases each win and can go up to x15. If you manage to land 2 exotic spin symbols during the round, then you can trigger an additional 5 spins.

During any random moment, all low paying symbols can be removed from the screen and high paying symbols fill the reels. This is called the Dynamite feature.

Aside from the Dynamite feature, you can trigger the Tiger Bounty when 3 tiger bounty symbols land on the 1st, 3rd and 5th reel. There are four offers presented by Joe and Allen decides which one to accept. The possible offers are 5x, 15x, 25x or 50x stake.

The grand feature has to be Election Time which recreates Joe Exotic's presidential campaign. When vote Joe symbols land on reels 1, 3 and 5, this leads to a mini-game option. You pick to uncover votes and you have to match 3. Ultimately, you could win 5x, 20x, 50x or 150x stake by landing James Garretson, Allen Glover, Jeff Lowe and Joe Exotic respectively.

Activated once 3 exotic spin symbols land on reels 1, 3 and 5, this feature awards 9 free spins. During this mode, a multiplier wild appears and remains throughout the duration of this bonus.

You can win instant cash prizes through landing 3 vote Joe symbols on reels 1, 3 and 5. You could win up to 150x your stake during this fun bonus round.

Everyone's favourite Tiger King has now got his own slot with Red Tiger Gaming leading the fray. Titled Joe Exotic, this bizarre slot plays on 5-reels with 20 paylines and has a maximum win of 3,500x your stake.

For those of you living under a rock for the past few years, Joe Exotic is a pop-culture icon who became famous due to Netflix's Tiger King series. The series focused on the life of a zookeeper and convicted felon Joe Exotic with a documentary style that had people hooked throughout 2020.

As expected, the background of the slot relates to Exotic and his life with pictures and stills from the series in the background. Surrounding the reels, you'll find a golden tiger print that adds some extra flair to the slot.

Now, the symbols on the reels contain different figures and memes throughout the series. You have James Garretson, Allen Glover, Jeff Lowe and of course Joe Exotic as symbols with Joe being the main star. Once you land on them, they animate with bling around them to create an extravagant appearance.

Sadly, the music is generic country sounds and we found there was no audio dialogue from Joe himself after the opening credits - which felt like a missed opportunity. If they got permission from Joe Exotic, they could've added in one of his famous tracks such as Here Kitty Kitty or I Saw a Tiger.

Honestly, the gameplay is pretty straightforward and formulaic. Don't worry about picking up the gameplay as all you need to know how to do is set your bet and spin.

Of course, the bonuses are exciting and full of laughs but the gameplay is still easy to follow. The spin button can be found at the bottom right of the screen with the autospin and bet level to the far left. At the bottom of the screen, you'll find the paytable and help button with further settings at the top of the screen.

Joe Exotic is a high volatility slot with a mediocre RTP of 95.70% - this is above the average but just barely. According to the developers, the maximum win for this slot is 3,500x your stake which can be won through the free spins with a multiplier of x15.

This slot promised us the world but sadly didn't deliver. Honestly, the premise of using Joe Exotic as the topic for a slot is genius but the execution just isn't there and the design is lacking. Similarly, the win potential is just too basic for a high volatility slot and we expected a little more. Perhaps, if they had voice-over lines from Exotic himself or even just bigger wins, this slot could've been a legendary slot that is remembered by fans.

If you were obsessed with Tiger King last summer and loved the whole world of Joe Exotic, then definitely check out this slot as there are some fan moments within. For those of you looking for a bonkers slot with loads of raunchy moments and exciting moments, then we suggest trying out Sausage Party instead with even more wins.

Play Joe Exotic now at the following verified online slot sites. These slot sites have been thoroughly audited and reviewed by us to ensure they offer an exceptional user experience, are trustworthy, safe, secure, and boast the best variation of online slots in their portfolio including Joe Exotic:-

Enjoyed Joe Exotic? Here's a handful of similar slots we think you'll like too. These online slots have been chosen based on features and themes similar to Joe Exotic. You might also want to check out other Red Tiger Gaming slots.