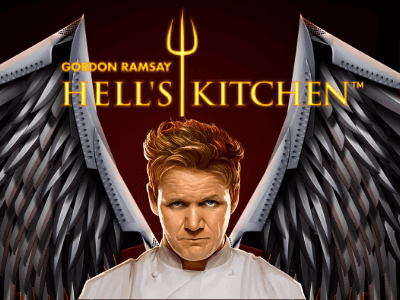 Hell's Kitchen is a tasty 5-reel, 20 payline slot based on Celebrity Chef Gordon Ramsay's famous reality television show that pits two teams of amateur chefs against eachother to find out who deserves to be crowned best in the kitchen! As you would expect from a NetEnt slot, this beautifully designed game is filled to the brim with fantastic bonus features and mechanics such as Ramsay's Wilds, Team Challenge Free Spins and Gordon's Bonus Game.

There are some pretty cool signature features truly worthy of Chef Ramsay's approval in NetEnt's Hell's Kitchen slot. First and foremost we have Ramsay's Wilds, this is a randomly triggered bonus feature that can happen at any time during base gameplay that sees between 5 and 7 symbols turn wild.

Whilst it's truly exciting to have a number of symbols go wild, the real fun is in the animations and voice clips leading up to it! The reels stop and Ramsay will shout something at the players and kitchen utensils such as knives, pans and plates are thrown aggressively at the reels, whatever symbols they hit turn wild!

The main bonus feature is the Team Challenge Free Spins. Players will receive between 10 and 15 free spins depending on how many Gordon Ramsay scatter symbols land on the reels.

There are two prize totals on each reel, at the end of the feature both sums of money are added together and paid out to the player, so it doesn't matter which team you pick on that front... However, if you are on the team with the most money collected at the end of the free spins you will be taken to a pick and click mini-game known as Gordon's Bonus Game.

Gordon's Bonus Game is a pick and click mini-game that sees players have 15 menus to choose from. Players pick one at a time and it'll either reveal a cash prize, prize multipliers or an X symbol. Players can collect cash and then multiply it at the end of the feature, but if players land 3 X symbols at any time the feature ends prematurely! 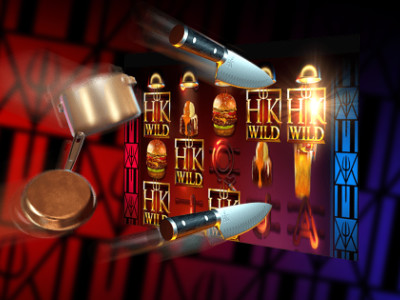 Chef Ramsay will angrily throw kitchen utensils (such as pots, knives and plates) at the reels randomly on any spin during the base game, this will turn between 5 and 7 symbols into wilds! 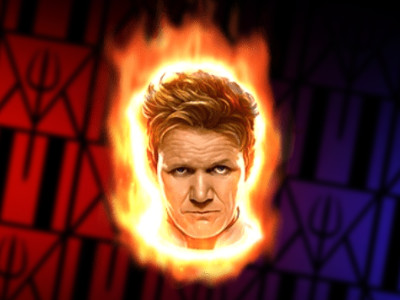 Players will receive up to 15 free spins when they land 3 or more scatter symbols. The game splits into two 5x3 reels and players must pick either the red or blue team to play for. These free spins are boosted by random multipliers and wilds. 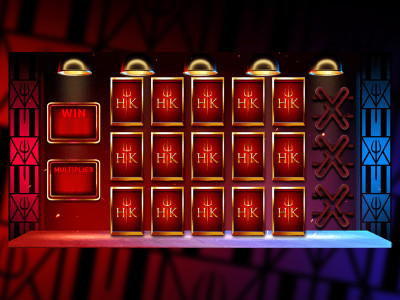 If the player's team wins the Team Challenge Free Spins then they'll get to participate in Gordon's Bonus Game, a pick and click mini-game that sees players pick cash prizes and multipliers, which can lead to some HUGE prizes!

Hell's Kitchen is a highly anticipated 5-reel, 20 payline food-themed slot developed by NetEnt that's been had been in the works for well over a year after the studio and iconic celebrity Chef Gordon Ramsay announced they were releasing a branded video slot at the start of 2020, much to the excitement for foodies and slot enthusiasts around the world!

This game looks quite tame from the outset, players are greeted by a cheery Chef Ramsay who proudly states 'Let's open the doors to Hell's Kitchen!'... Don't be fooled, you're going to have to trust us when we say that things are about to seriously heat up in the kitchen! There's a whole host of wonderful bonus features to get stuck into, but this game especially comes into its own when Ramsay's Wilds kicks in, this randomly triggered bonus sees Gordon angrily throws kitchen utensils at the reel whilst between 5 and 7 wild symbols land in random positions on the reels.

Hell's Kitchen is a wonderfully designed branded slot that pays homage to the celebrity chef, and his iconic reality television series that sees aspiring chefs go head-to-head in a bid to overcome rigorous cooking challenges in his kitchen. The overall design of the base game is actually pretty simple. There are no elaborate designs behind the reels as we initially thought there would be, just two coloured patterns on either side of the reels that signify the two teams that compete in the real-life show, red and blue.

Low paying symbols are your standard J, Q, K, A, all designed to look like grills on an oven... If you watch them carefully you'll see them glow bright red as they heat up! High paying symbols are all items you'd find in a restaurant, a sticky toffee pudding, a cocktail, a beefburger and a beef wellington!

The game's scatter symbol is Gordon Ramsay himself! Beware though, he's got quite a nasty scowl on his face and his head is surrounded by flames! The game's wild symbol is the Hell's Kitchen Logo (HK with a trident in the middle) with the word WILD below it.

A fairly low-key soundtrack pulled straight from the show plays as the reels spin, there's nothing too dramatic about it until the bonus features kick in when the pace picks up! However, what's really special about this slot is the voice acting! There are a whole host of voice clips from Gordon Ramsay himself that were recorded especially for this title! Whenever wins and bonuses are triggered Gordon himself will chime in, and we love it!

Unsurprisingly, this slot plays much like any standard NetEnt title, there's really not too much to learn as NetEnt do tend to keep their high-profile games pretty simple. There's a semi-transparent action bar along the bottom of the game reels that allows players to access the game settings, read the paytable and bonus information, set their stake and make standard, turbo or automated spins.

This low to medium volatility slot has an RTP of 96.07%, which is pretty good in this day and age! We're still finding our way around this slot, but we understand that it has a maximum win of 1,000x the player's initial stake, which is such as a shame as this is the only area this slot falls flat.

Only an idiot sandwich would opt not to give Hell's Kitchen a spin! This branded NetEnt slot is FANTASTIC when it comes to design, bonus features and mechanics! It's a slot that's truly been cooked to perfection in those areas, and for that reason alone we urge you to try it! The one thing we truly found disappointing was the fact that players can only win a maximum 1,000x their stake, but you still shouldn't rule this game out.

Play Hell's Kitchen now at the following verified online slot sites. These slot sites have been thoroughly audited and reviewed by us to ensure they offer an exceptional user experience, are trustworthy, safe, secure, and boast the best variation of online slots in their portfolio including Hell's Kitchen:-

Enjoyed Hell's Kitchen? Here's a handful of similar slots we think you'll like too. These online slots have been chosen based on features and themes similar to Hell's Kitchen. You might also want to check out other NetEnt slots.