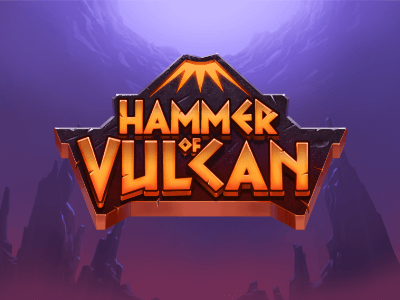 Deep underneath Mount Etna in Sicily, learn the art of iron weapon and jewellery making from the God of Fire himself Adranus.

Win up to 20,000x your stake in this high volatility slot. Wilds, scatters, free spins - Hammer of Vulcan has it all to help you win a prize befitting of the Gods.

It’s clear that the show stopping feature has to be the Light The Forge bonus game that you can win through rolling 3 or more volcano scatters, or buy within the game. That’s not the only feature in the game as you have hammer wilds that convert themselves and all symbols underneath into wilds for bigger cash prizes.

Not only can you win up to 20 free spins, but you can trigger up to 6 additional ones if you roll volcano scatters during the bonus round. Not only that, but if the last free spin is not a winning spin, then you get an extra free spin until you do.

During the free spins round, the hammer wild can increase the win multiplier by +1 when it lands on the reels and converts all symbols under it into wilds. You can also retrigger free spins by landing volcano scatters during the bonus round.

If you are unlucky enough not to spin any volcano scatters for the free spins round, then you can bet 80x your bet to gain an entry ticket to the Light The Forge bonus game. However, this may not be available in all markets, so check with your casino of choice first.

Set in the volcano magma chambers of Mount Etna, join the God of Fire to try and win 20,000x your stake in this mythical slot. Hammer of Vulcan is played on 6-reels and 4,096 paylines due to winning combinations made simply by landing matching symbols on adjacent reels.

This high volatility slot not only gives you fiery features such as Light The Forge, but you have the option to purchase this in game if you don’t manage to activate it. There are just so many options within Hammer of Vulcan.

Hammer of Vulcan is set within a volcano, so it’s naturally dark with a few bursts of magma. In the background, you can see magma oozing from the outside and coming into the volcano. This added with the flame particles coming from the bottom really convey the heat of a volcano. Thankfully, they are both animated too giving the slot even more life.

Symbols on the reels look like traditional Ancient Greek statues and drawings to give even more effect. The 3D detailing in the symbols matches well with the dynamic background to make it seem more than your average mythical slot. Successful spins will even bring down the hammer (literally) to take you to the next round - which of course looks incredibly cool.

Naturally, there are sounds of forging metal and other elements, but the standout sounds have to be the music. A classic rock track plays in the background with the bass beat to hype up the slot even more. The slot almost seems like a music video for a rock band from the 80s or 90s with the atmosphere. It all makes for a pretty interesting design.

Forgoing the traditional payline symbol and matching reels, with Hammer of Vulcan wins can be made by matching adjacent symbols. There are even more ways to win making the gameplay more scorching.

Like in most Quickspin games, all the menus are featured at the bottom with settings and gameplay options being to the left. The spin and autospin button are to the far right with the option to set a 1000 autospins if you decide to do so.

The base game will allow you to win up to 12x your stake for 6 of the golden golem symbols. This can be increased with the Light The Forge bonus game which gives you free spins and multipliers that grow by +1 every time that the wild hammer lands.

With the ability to retrigger free spins, you could see up to 20,000x your stake during these bonus rounds. Hammer of Vulcan literally states that the max return is 20,000x your stake, so that’s the highest you can get too.

The RTP isn’t earth shattering, but it’s at a decent 95.81% throughout the game. Hammer of Vulcan is a high volatility slot meaning that it’ll appeal more to seasoned online slot players who have a big enough bankroll to sustain themselves whilst waiting for big spins.

Hammer of Vulcan almost hits everything that we want in an online slot, but sadly the win potential is a little lower than we’d want. The maximum win being 20,000x your stake isn’t anything to frown at but with the high volatility and average RTP - it’s nothing special.

Don’t let this put you off completely as the game has a unique aesthetic mixed with some vibrant gameplay. If you love mythical slots like Age of the Gods, then this could be a slot worth trying. Just take into consideration the win potential whilst playing.

Play Hammer of Vulcan now at the following verified online slot sites. These slot sites have been thoroughly audited and reviewed by us to ensure they offer an exceptional user experience, are trustworthy, safe, secure, and boast the best variation of online slots in their portfolio including Hammer of Vulcan:-

Enjoyed Hammer of Vulcan? Here's a handful of similar slots we think you'll like too. These online slots have been chosen based on features and themes similar to Hammer of Vulcan. You might also want to check out other Quickspin slots.