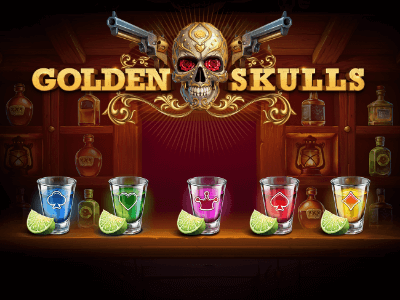 Grab your best revolver and journey to a Mexican bar in the middle of the desert. You’ll find yourself faced off against cowboys and cowgirls in this 5-reel, 10 payline slot.

The biggest draw has to be the free spins and tequila bonus that can trigger even more free spins. You better like tequila - because that’s all this bar is selling.

There’s not a lot to Golden Skulls feature wise - but it contains the staples of free spins and wilds. There’s an additional feature called the tequila bonus that gives additional free spins.

Golden Skulls naturally has golden skulls as the wilds featured in the slot and it can substitute all symbols except for the scatter. It provides the best prizes by replacing standard symbols for the winning combination.

Landing 3 or more scatters will trigger the free spins round with a minimum of 12 free spins. If you manage to get 4, then you can trigger 15 free spins or even 20 if you land 5 scatters. The free spins will also activate the tequila bonus.

There is life-changing money win with 4-tiered progressive jackpot available - with Red, Silver, Gold or Diamond. Naturally, this grows as you play and has a timer in which you have to win it by.

Ever wanted a hybrid of Mexican themed slots with the wild west? Netgame heard your request and made it into Golden Skulls. This 5-reel, 10 payline slot is all about free spins and tequila. You’d better make sure that it’s your drink of choice whilst playing this slot.

Once upon a time in Mexico, there was a lone bar in the desert that only sold tequila. It featured fearsome cowboys and dangerous cowgirls waiting to just strike you down with one wrong move. That’s the whole aesthetic of the slot and it’s done really well.

The setting is in the desert with a moving background of clouds to show the barren wasteland - all that’s left is the bar. There are scary but beautiful skeletons lurking around - just waiting for you to leave.

This combined with the upbeat but adventurous music really brings excitement to the slot. With guitar sounds and rattlesnakes - it feels like a western slot. None of the sounds or music are too annoying, and you’ll find yourself humming along as you spin. Overall, the design is fantastic and shows a lot of thought and effort put into the slot.

It’s simple really - all you do is spin and win. There are no complicated gimmicks or mechanics to it. Menus are navigated at the bottom with the progressive jackpot at the top. The spin and autospin button featured in the middle with up to 1,000 autospins to decide on.

The RTP is at a respectable 95.27% - which is above average. It’s a decent percentage that is a theoretical fair return. According to the official statement released by Netgame, the maximum win potential is 2,246x your stake during the free spins and tequila bonus round.

Golden Skulls is a high volatility slot - so returns will be less frequently but more rewarding when they do. For the base game, the cowboy and cowgirl are worth up to 1,000x the line stake for their maximum combinations. The payout isn’t huge but there is the option to win on the 4-tiered progressive jackpots.

The presentation of Golden Skulls is great - but sadly the gameplay doesn’t quite match up. It has simple gameplay with free spins but that’s about it. Perhaps with decent multipliers and more exciting wilds, Golden Skulls could’ve been a masterpiece. Sadly, it’s a little lacking with features and gameplay.

It’s more suited for jackpot hunters or veterans players who have the bankroll and patience to sustain their gameplay. If you love Mexican slots with a wild west edge - Golden Skulls is one to check out.

Enjoyed Golden Skulls? Here's a handful of similar slots we think you'll like too. These online slots have been chosen based on features and themes similar to Golden Skulls. You might also want to check out other Netgame slots.