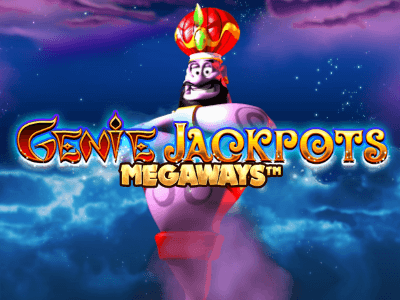 Like all your favourite games - Genie Jackpots has had a Megaways makeover. You now have 15,625 ways to win!

All your wishes will come true with features such as Genie Power Spin and Genie Free Spins. Blueprint Gaming has definitely re-invented Genie Jackpots to be bigger and better than ever.

Jump straight into the action and play Genie Jackpots Megaways now at the following fully licenced UK slot sites. These slot sites have been thoroughly audited and reviewed by the team here at Slot Gods to ensure they offer an exceptional user experience, are trustworthy, safe, secure, and boast the best selection of online slots in their portfolio including Genie Jackpots Megaways...

Everyone’s favourite Genie returns with a Megaways transformation that completely redefines the slot. Genie Jackpots Megaways incorporates Big Time Gaming’s mechanic to give the player 15,625 ways to win compared to the original 20 paylines.

Players also have the chance to randomly win from the Genie Power Spin to win one of four wishes. These include:

During any spin, the jackpot genie can appear from his magical lamp and grant you one of four wishes. You can obtain Wild Megaways, Genie Wilds, Genie Win Spin or Bonus Megaways.

Not only can you get up to 20 free spins, but you have four extra bonuses to assist you throughout your free spins. You pick a lamp in the Cave of Wonders and could get Mystery Wishes, Unlimited Multiplier, Locking Wilds or Genie Streak.

Not only do you have base game wilds that can substitute all symbols except for the bonus scatter, the game has locking wilds in free spins and genie wilds to cover a reel position. Genie Jackpots Megaways is definitely all about the wilds.

In 2015, the spellbinding Genie Jackpots released and showed exactly how an Arabian themed slot should be. It combined the excitement of features and modifiers with vibrant graphics to create something utterly memorable.

Naturally, Blueprint Gaming decided that fans deserved a Megaways version of the game to enhance the gameplay even more. Instead of 5-reels on 20 paylines, Genie Jackpots Megaways has 6-reels with 15,625 ways to win. Not only that, but the game re-shaped some of the mechanics and brings features to the beloved slot.

The original Genie Jackpots has a gorgeous design that stands out as a classical Arabian themed slot, so Genie Jackpots Megaways had a lot to live up. Thankfully, it delivers on all accounts on the design side. Not only are the graphics enhanced to look more sharp and polished, but the colours seem more vibrant.

There are little details such as mist around the reels to give you a full Arabian nights feeling. This mixed with the music and vocals from the genie will make you feel like you are in an Aladdin movie.

For a slot with such a dedicated fanbase, Blueprint could’ve easily made this a clone of the first game without any thought - but thankfully actually tried to enhance and make it a better experience.

Just like the original, the gameplay may seem a little complicated but it’s simple overall. The aim is to spin and win - so naturally you set your bet and spin. Finding the menus is easy as they are featured on the bottom of the screen along with the spin, autospin and bet level.

That being said, the in-game instructions are a little confusing. At times, you may have to go into the full manual of the game to find out what bonus features actually mean. This is the only major concern on the gameplay front as slot novices may be unaware of how to find the details.

The 3 Wishes Power Spin from the original has been replaced with the Genie Power Spin which ultimately only grants one of four prizes instead of five. It’s a shame that they got rid of the fan-favourite Magic Carpet Bonus Feature - but the features in the Genie Jackpot Megaways version are entertaining enough in their own right.

Blueprint Gaming decided to improve on the game in almost every way. In Genie Jackpots, the RTP is a disappointing 93.19% but increases to 96.52% in Genie Jackpots Megaways. Players of the original will be happy to know that the volatility level remains at medium to high.

Ironically, despite being called Genie Jackpots Megaways - there is no jackpot. The original is connected through Jackpot King Deluxe, but that isn’t the case with this title. The maximum you can expect to win is 10,000x your stake provided that you win multipliers and additional free spins. It may be decent but a little depressing compared to the progressive jackpot in Genie Jackpots.

On paper, Genie Jackpots Megaways sounds like a complete win. Sadly, this isn’t fully the case. Whilst the visuals and entire aesthetic is miles above the original game, the lack of an actual jackpot and the missing features from the first game do let this title down. Props to Blueprint for creating new features and modifiers, but they aren’t as good as other mechanics within the Genie Jackpots series.

That doesn’t mean that Genie Jackpots Megaways is a bad game - quite the opposite. It’s a thrilling game full of exciting ways to win. If you love Arabian slots or the original Genie Jackpots, then definitely give this slot a try.

Play Genie Jackpots Megaways now at the following verified UK slots sites. These slot sites are fully licenced and have been thoroughly vetted and reviewed by us to ensure they offer a great user experience, are trustworthy, secure, and have a wide variety of the best online slots in their lobbies including Genie Jackpots Megaways:-