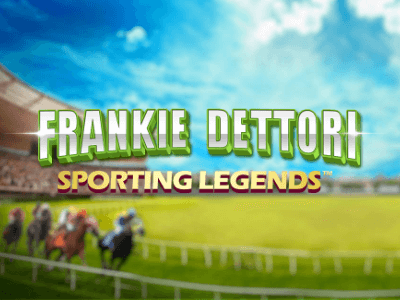 Frankie Dettori: Sporting Legends is a 5-reel, 25 payline slot developed by Playtech that makes up part of the iconic Sporting Legends series. This game boasts some incredibly enjoyable (and lucrative) bonus features such as Galloping Wild Respins and Golden Derby Free Games that can see players win 10,000x their initial stake. This epic horse-racing themed slot also gives players the opportunity to win one of three Sporting Legends progressive jackpots.

Jump straight into the action and play Frankie Dettori: Sporting Legends now at the following fully licenced UK slot sites. These slot sites have been thoroughly audited and reviewed by the team here at Slot Gods to ensure they offer an exceptional user experience, are trustworthy, safe, secure, and boast the best selection of online slots in their portfolio including Frankie Dettori: Sporting Legends...

If a fully expanded Frankie Dettori galloping wild symbol appears fully on the first reel then it will begin shifting from left to right across the game reels.

The galloping wild substitutes for all symbols except for scatters and the win multiplier increases in the following increments: 1x, 2x, 3x, 5x and 7x. If players suffer a losing spin the galloping wild respins end.

If players trigger the Golden Derby Free Games bonus feature (by way of landing three scatter symbols) then they'll be tasked with backing one of three horses (Ruby Robin, Triple Crown or Lightning Rush) in a three-horse race.

Free spins will begin and every time a winning combination is made featuring one of the special horse wild symbols (that match the colours of the horses in the race) then that specific horse will move forward on the race track above the game reels.

Players can trigger the Sporting Legends Jackpot with any spin of the reels at any time! There are three different jackpots to be won, these are as follows: If a fully expanded Frankie Dettori galloping wild symbol appears fully on the first reel then it will begin shifting from left to right across the game reels, each time the wild shifts a multiplier will increase to a maximum of 7x. If players land three scatter symbols anywhere on the reels then they'll trigger the Golden Derby Free Games. This sees players receive free spins with a multiplier applied to the overall win depending on where their chosen horse finishes. Frankie Dettori: Sporting Legends is a 5-reel, 25 payline slot developed by Playtech that makes up part of the iconic Sporting Legends series. This epic horse racing-themed slot is based on legendary Jockey Frankie Dettori, much like older slot Frankie Dettori's Magic Seven Jackpot. If you're after a game with excellent bonus features and mechanics such as stacked wilds, re-spins and free spins with multipliers then you'll absolutely love this slot!

If that wasn't enough to pull you in then the three-tiered Sporting Legends Jackpot most certainly will with hundreds of thousands of pounds on the line!

We won't beat around the bush, this is a pretty simple slot that doesn't really offer too much in the way of flashy design, so if you're after something grand you might want to look elsewhere.

Behind the reels is an image of a horse racing track with a packed crowd watching on from the stands. Low paying symbols are 10, J, Q, K, A and high paying symbols include a horseshoe, jockey's helmet, rosettes, Frankie Dettori riding a horse, and a smiling Dettori. The game's special symbols are a finish-line sign for the scatter and a trophy for the game's wild.

With regards to a soundtrack, don't get too excited, players must listen to crowd noise on repeat throughout, it's not great, but nor is it terrible... You're likely to just tune it out after a while.

This slot is as simple as they come when it boils down to it, Frankie Dettori: Sporting Legends is a traditional online slot that allows players to set their line bet and the number of paylines they're playing on the action bar along the bottom of the game reels. Players can also set up to 99 free spins using the autoplay button on the right-hand side of the action bar.

This medium volatility progressive jackpot slot has an RTP of 93.02%, which isn't incredible, but understandably low due to the fact that this title is linked to three Sporting Legends jackpots. The maximum (non-jackpot) win players can register when playing Frankie Dettori: Sporting Legends is 10,000x the player's stake.

This slot might not look the part when it comes to design, but you have to believe us when we say that it's genuinely well worth playing! Both the Galloping Wild Respins and Golden Derby Free Games are FANTASTIC! You'll not regret giving this progressive jackpot slot a spin or two! Who knows, you might even win big?

Play Frankie Dettori: Sporting Legends now at the following verified UK slots sites. These slot sites are fully licenced and have been thoroughly vetted and reviewed by us to ensure they offer a great user experience, are trustworthy, secure, and have a wide variety of the best online slots in their lobbies including Frankie Dettori: Sporting Legends:-