Fluffy In Space is a super cute, fluffy slot set in space that's developed by Eyecon. This beginner-friendly 5-reel, 25 payline title can see players win 5,000x their initial stake and boasts a Fluffy In Space feature that sees sticky symbols (that can be stacked) remain in place whilst free spins take place.

Like all standard slots in the Fluffy series, this game has two major bonus features, the first of which is a free spins round that can be triggered by landing 3 planet symbols, secondly, we have the brand new Fluffy in Space Feature that sees players receive 3 free spins with sticky stacked elephant symbols on the reels!

The free spins bonus differs in comparison to older Fluffy games as this one actually offers more spins to players to start out with (six as opposed to five), however, it remains the same that players can trigger a total of 25 free spins. Free spins can be retriggered up to a maximum of 50 times.

The Fluffy in Space feature is activated by landing 3 elephant scatters. Players will receive 3 free spins in which stacked elephant symbols can appear. Each elephant symbol is held for the next spin and the amount of respins resets to 3, there's no limit as to how many times players can reset these spins and players can win up to 500x their stake. 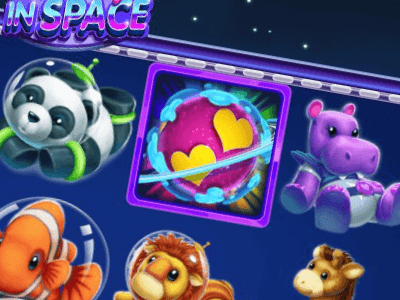 If players land 3 planet scatter symbols they'll trigger a minimum of 6 free spins, up to a total of 25 free spins. The free spins can see the Fluffy in Space feature trigger and free spins can be retriggered up to a maximum of 50 times. 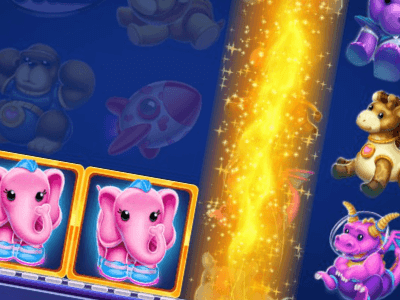 The Fluffy in Space feature is activated by landing 3 elephant scatters. Players will receive 3 free spins in which stacked elephant symbols can appear. Each elephant symbol is held for the next spin and the amount of respins resets to 3.

Fluffy in Space sees our favourite cuddly stuffed toys leave the fairground behind in search of a brand new adventure in outer space. This 5-reel, 25 payline Eyecon slot can see lucky players trigger up to 25 free spins and take advantage of the brand new Fluffy in Space feature that sees players win 3 free spins with sticky stacked scatter symbols on the reels!

Who would have thought that a trip to outer space is what the Fluffy series genuinely needed to give it a bit of oomph! Eyecon has gone all out to actually make this game look and sound so much better than previous releases.

All of these iconic stuffed animal characters are dressed in attire suitable for space exploration, with each one donning their very own spacesuit. For the first time, the characters actually look cute, and not like crudely drawn animals.

If that wasn't exciting enough, Eyecon has given this game a half-decent soundtrack and unique sounds when symbols land! We actually have music during base-gameplay, which is an absolute revelation. If you've played any of the older Fluffy slots you know how big of a deal this is, there's nothing worse than a silent slot!

Someone at Eyecon has seriously been listening to fan feedback over the last few years because even the win potential has improved with the release of Fluffy in Space! This high volatility slot has an RTP of 96.35% which is an improvement on previous releases.

Finally, we have a Fluffy game that's worthy of good feedback! Fluffy in Space genuinely looks great and boasts some unique new features that aren't just the same as what appeared in the previous releases, but with a different design. If this is the direction Fluffy Games are going in then we're happy to see this slot series grow and prosper!

Play Fluffy in Space now at the following verified online slot sites. These slot sites have been thoroughly audited and reviewed by us to ensure they offer an exceptional user experience, are trustworthy, safe, secure, and boast the best variation of online slots in their portfolio including Fluffy in Space:-

Enjoyed Fluffy in Space? Here's a handful of similar slots we think you'll like too. These online slots have been chosen based on features and themes similar to Fluffy in Space. You might also want to check out other Eyecon slots.