Fluffy Favourites Fairground is the third in a series of super cute, fluffy slots developed by Eyecon. This beginner-friendly 5-reel, 25 payline title can see players win 5,000x their initial stake and boasts a Prize Pick feature and up to 25 free spins.

Jump straight into the action and play Fluffy Favourites Fairground now at the following fully licenced UK slot sites. These slot sites have been thoroughly audited and reviewed by the team here at Slot Gods to ensure they offer an exceptional user experience, are trustworthy, safe, secure, and boast the best selection of online slots in their portfolio including Fluffy Favourites Fairground...

“ Better than its predecessor, but is still a missed opportunity ”

The bonus features are identical to those in the original Fluffy Favourites slot, however, the pick and click mini-game has been redesigned and renamed.

The free spins round occurs when players land 3, 4 or 5 elephant scatter symbols then they'll trigger 15, 20 or 25 free games respectively. All wins are tripled during this bonus feature and free spins can be re-triggered a maximum of 15 times.

The prize pick feature occurs when 3 (or more) big top scatter symbols land on the reels. Players are taken to a new game screen where they must play hook-a-fluffy, they must hook 3 stuffed animals from the water. These stuffed animals have multipliers behind them. These are added together, the combined total is then paid out to the player. 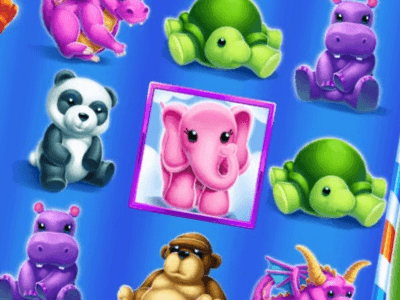 If players land 3, 4 or 5 elephant scatter symbols then they'll trigger 15, 20 or 25 free games respectively. All wins are tripled during this bonus feature and free spins can be re-triggered a maximum of 15 times. 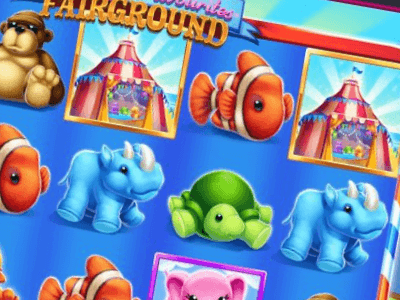 If players land 3 or more Big Top scatter symbols then they'll trigger hook-a-fluffy, a pick and click mini-game, each of the three toys they hook has a multiplier. These are added together, the combined total is then paid out to the player.

Fans of Fluffy Favourites and Fluffy Too rejoice! The fluffy family has grown even more following the 2017 release of Fluffy Favourites Fairground, a 5-reel, 25 payline slot developed by Eyecon. This slot sees players in with a chance of triggering the prize pick feature, triggering up to 25 free spins and winning 100x their bet

Eyecon has actually pulled through with Fluffy Favourites Fairground, the first two games in the series were absolutely dreadful in terms of design, and it's fair to say that this is a huge improvement, it's still not perfect, but it's way better.

The reels are actually pretty vibrant and colourful, with updated versions of all the characters we saw appear in the original. Behind the reels, there's a Ferris Wheel, Big Top, rainbow and the sea.

All of the game symbols are stuffed animals, these are as follows: An angelfish, duck, rhino, giraffe, turtle, lion, panda, monkey, dragon and hippopotamus.

Again, this slot suffers from the safe fate as the originals in the sense that there's no sound in-game until a winning spin is registered or the bonus rounds are triggered, which is disappointing.

As this is identical to the first Fluffy slot, there's little to get your head around here, there's an action bar along the bottom of the reels. From left-to-right on the action bar, this bar includes a mute button, a coin button that allows players to set how many paylines they're playing on and their bet per line, a spin button, an autospin button that allows players to set up to 100 automated spins and finally a help button that brings up the paytable and bonus feature details.

This high volatility slot has a below-average RTP of 95.38% and can see players win a maximum of 5,000x their stake. It would have been nice if Eyecon had improved on the original Fluffy Favourites slot, but at the end of the day, 5,000x isn't terrible.

Visually, Fluffy Favourites Fairground is a massive improvement on the other games in the Fluffy series, but that doesn't hide the fact that nothing new has been added to improve the game. The pick and click mini-game is just a redesigned version of the old one. We'd hope to see notable improvements on the win potential and bonus features in a sequel such as this.