Fluffy Favourites Too is the second in a series of super cute, fluffy slots developed by Eyecon. This beginner-friendly 5-reel, 25 payline title can see players win 5,000x their initial stake and boasts a coin pusher feature that sees scatters appear anywhere across the reels, up to 25 free spins with tripled winnings and a gamble feature.

Jump straight into the action and play Fluffy Too now at the following fully licenced UK slot sites. These slot sites have been thoroughly audited and reviewed by the team here at Slot Gods to ensure they offer an exceptional user experience, are trustworthy, safe, secure, and boast the best selection of online slots in their portfolio including Fluffy Too...

“ There are signs of improvement, but still a below average online slot ”

The bonus features in Fluffy Too are essentially identical to those you'll find in Fluffy Favourites. First and foremost we have the free spins feature. Upon landing 3, 4 or 5 elephant scatter symbols players will trigger 15, 20 or 25 free spins respectively. During this bonus round all prizes are tripled and the free spins can be triggered a maximum of 15 times.

Secondly, we have the Coin Pusher feature, this is a pick and click bonus mini-game that is triggered when players land 3 or more coin scatter symbols. Here players must pick three coins from a coin pusher arcade machine. These coins each have hidden multiplier values behind them. The coins the player pick (3, 4 or 5 dependent on the number of scatters that landed) then have their values added together, the overall prize is then paid out to the player. 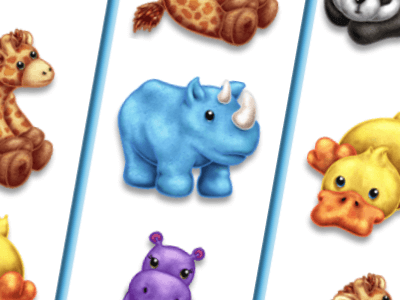 Upon landing 3, 4 or 5 elephant scatter symbols players will trigger 15, 20 or 25 free spins respectively. During this bonus round all prizes are tripled and the free spins can be triggered a maximum of 15 times. 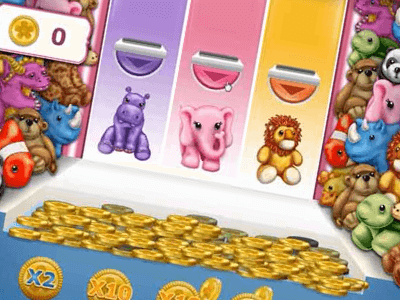 When players land 3 or more coin symbols anywhere on the reels they'll trigger the coin pusher pick and click mini-game. Here players must pick 3 or more coins. The coins reveal multipliers which are added together and paid out to the player.

Fluffy Too is the second slot by developers Eyecon that features in the cute and cuddly Fluffy series. This 5-reel, 25 payline title sees players in with a chance of triggering up to 25 free spins or the coin pusher feature that sees punters try their luck at a pick and click minigame that can award up to 100x their bet.

Fluffy Too is quite the improvement on Fluffy Favourites, no longer does the game look as if it were designed on a piece of paper using pencils, which is quite a relief as it looks terrible!

Behind the reels there's an entire fairground scene that's still pretty crudely drawn, but it serves a purpose and fits the aesthetic of the slot well. The reels themselves are pretty bland and feature all the animals we saw in the previous Fluffy slot.

These animal symbols (in order of least valuable to most valuable) are angelfish, duck, rhino, giraffe, turtle, lion, panda, monkey, dragon and hippopotamus. The scatter symbol is Fluffy Favourite's mascot, the pink elephant and a golden coin!

We found it extremely frustrating that despite turning the sound on for this game, there were no sounds when we experienced a winning spin during automated spins.

This game plays quite differently to Fluffy Favourites, rather than feature an action bar at the bottom of the game screen everything is placed to the right of the reels. There's a large pink autoplay button that allows players to set up to 100 automated spins, a blue spin button and another pink button that allows players to set the number of paylines their playing on and bet per line using sliders.

This high volatility slot has an RTP of 95.38% which is slightly below average and a maximum win of 5,000x the player's stake. Which is frustrating the same as the original game.

Eyecon has made crucial improvements to the game in the design department, but that's about it. It's still fairly poorly designed and has little to entice modern online slot enthusiasts who like their games full of exciting bonus features and mechanics.

Play Fluffy Too now at the following verified UK slots sites. These slot sites are fully licenced and have been thoroughly vetted and reviewed by us to ensure they offer a great user experience, are trustworthy, secure, and have a wide variety of the best online slots in their lobbies including Fluffy Too:-

Enjoyed Fluffy Too? Here's a handful of similar slots we think you'll like too. These online slots have been chosen based on features and themes similar to Fluffy Too. You might also want to check out other Eyecon slots.