Enchanted Kingdom transports players to a magical fairytale world in which frog princes and beautiful princesses are commonplace! This 5-reel, 30 payline slot boasts some truly wonderful feature including free spins with fixed payouts and an innovative Wager Saver feature you'll only find on a small handful of slots!

“ A nicely themed middle of the road slot, best known for its Wager Saver feature ”

The Wager Saver feature is a special feature unique to WMS/SG Digital games that comes into play when the player's balance becomes lower than the previous total bet.

At the cost of their remaining balance players can spin a wheel-of-fortune to be in with a chance of winning 1x, 3x or 5x the value of their previous bet.

The chance of winning is shown in the green section of the game wheel, the chance of losing is shown on the red side. If the dial lands on green players will win. The RTP for this feature is equal to the RTP of the base game (95.14%).

Those that choose to play Enchanted Kingdom will have the opportunity to trigger one of three networked progressive jackpots that together make up the Mega Drop Jackpot network. These jackpots are the Minor, Major and Epic jackpots.

When any of the Mega Drop jackpots are won then the jackpot amount is reset to a reseed value which is approximately 25% of the value paid out to the jackpot winner. 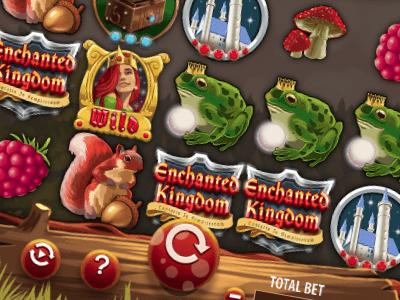 Players will trigger 20 free spins if they manage to land 3 scatter symbols anywhere on the reels. These free spins come with a fixed payout that increases based on the number of scatters that triggered the bonus. 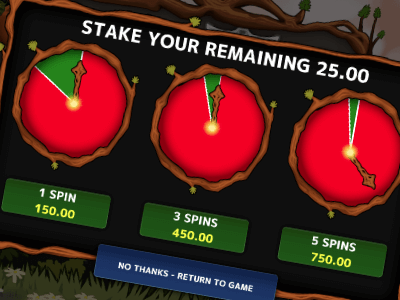 The Wager Saver is a unique bonus feature that comes into play when the player's balance is lower than their previous bet. It's a wheel-of-fortune style mini-game that can pay out a maximum of 5x the player's previous bet. 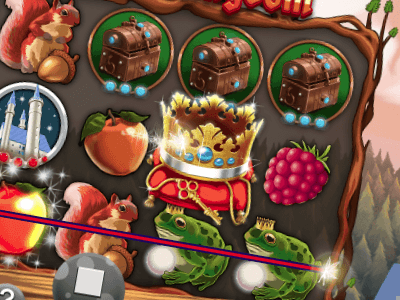 Players can potentially trigger one of the three progressive jackpots that make up the Mega Drop Jackpot network with any spin of the reels. These are the Minor, Major and Epic jackpots.

Enchanted Kingdom is a truly charming 5-reel, 30 payline mythical-themed slot developed by WMS that boasts features some lucrative and unique feature that you won't see in many other slot games.

This magical title can see players trigger up to 20 free spins alongside a generous fixed payout as well as find themselves receiving a last-second stay of execution by way of the Wager Saver feature.

This mythical-themed slot feels like all of the elements have been pulled from the pages of a fairytale storybook. The reels are set upon branches in front of a sprawling forest that has a beautiful castle nestled amongst the trees.

Symbols (from lowest paying to highest) are as follows: a golden apple, toadstools, a berry, a frog prince, a squirrel, a swan, a chest, a beautiful castle and the Enchanted Kingdom logo. The special symbols see a princess appear as the wild and jewel-encrusted crown as the scatter.

The soundtrack leaves a little to be desired, when the reels aren't spinning a nice, low-key song plays, however when the reels are spun players are subjected to a fairly dodgy piano piece that plays on repeat for each and every spin, it gets tiresome quite quickly.

We love it when slots get creative with their action bars, and Enchanted Kingdom does this brilliantly! All of the buttons are toadstools growing out of a large log. From left-to-right, we have an autoplay button (that allows players to set up to 100 automated spins), a paytable button, a large spin button and an area where players can change their stake.

This slot has an RTP of 95.14%, which isn't entirely shocking for a game that features progressive jackpots, if anything, this is actually quite a good RTP for this kind of slot. The developer hasn't stated the maximum win potential of this game, however, we do know that the maximum payout sits at £250,000.

This charming slot is a little on the soft side, but if you're after a sickly sweet game then this is undoubtedly one you should consider playing! The bonus features are pretty good and we absolutely love the prospect of having a second chance to win some cash thanks to the Wager Saver feature.

Play Enchanted Kingdom now at the following verified online slot sites. These slot sites have been thoroughly audited and reviewed by us to ensure they offer an exceptional user experience, are trustworthy, safe, secure, and boast the best variation of online slots in their portfolio including Enchanted Kingdom:-

Enjoyed Enchanted Kingdom? Here's a handful of similar slots we think you'll like too. These online slots have been chosen based on features and themes similar to Enchanted Kingdom. You might also want to check out other WMS slots.