Egyptian Pays is a 5-reel, 243 payline slot developed by Inspired Gaming. The major selling point of this Egyptian themed slot is its unlimited free spins with an increasing multiplier. Free spins only run out when a player has registered 3 losing spins, however every time a winning spin is registered the lives reset meaning this bonus can go on for a very long time!

Jump straight into the action and play Egyptian Pays now at the following fully licenced UK slot sites. These slot sites have been thoroughly audited and reviewed by the team here at Slot Gods to ensure they offer an exceptional user experience, are trustworthy, safe, secure, and boast the best selection of online slots in their portfolio including Egyptian Pays...

Players have 3 free spins to start out with (known as lives), every time they trigger a winning spin a multiplier will climb up a ladder towards a 50x, whatever was won on that spin is multiplied by whatever multiplier the player has reached at that given time.

Every time the player loses a spin they lose one of their three lives, if they lose all three then the bonus ends... That said, if they're down one or two lives then they'll be given one back as soon as they pick up another win. This means players have unlimited free spins (or lives) as long as they keep registered wins without losing 2 or 3 losses in a row.

On any spin where the player only has one life remaining a life saver spin will activate where a single WILD symbol will cover the entirety of reel 3, boosting the chance that players will trigger a winning spin, keeping them in the bonus feature. 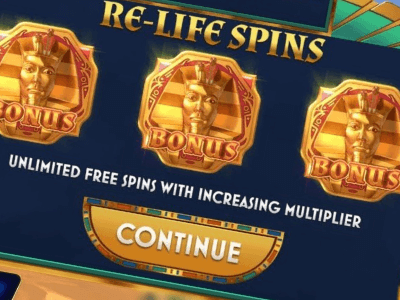 Re-life spins are Egyptian Pays' free spins feature. These 3 spins are unlimited as long as players don't lose 2, or 3 consecutive spins in a row, thus depleting all of their available lives. 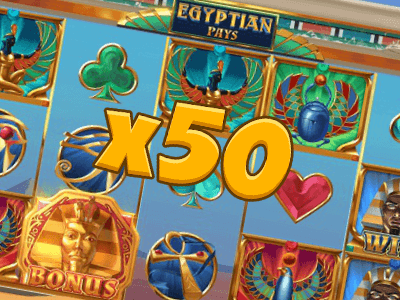 During the Re-life spins bonus players will have a multiplier attached to each and every spin they make. Whenever a winning spin occurs the multiplier increases to a maximum of 50x.

Egyptian Pays is a 6-reel, 243 ways to win slot developed by Inspired Gaming that sees players try their hand at working their way into the Re-Life Spins bonus feature.

This is a slot that genuinely comes into its own when the bonus feature is triggered, so don't be put off by mundane base gameplay, things really pick up later on down the line, when there's HUGE 50x multipliers and unlimited free spins to be had.

Egyptian Pays is a stereotypical Egyptian-themed slot, the reels feature gold trim and are set into the hot desert sand. Behind the reels is just an expansive desert with a solitary pyramid in the distance. We'd be lying if we said we were overly impressed with the effort that has gone into creating a world in which the reels sit.

Thankfully, the game wins back some points for making a fantastic job of the game symbols. Low paying symbols are stylised versions of card suits, clubs, diamonds, spades and hearts. High paying symbols are all iconic Egyptian Gods, iconography and scarabs. The wild symbol is a Pharoah and the scatter is a golden Pharoah.

The music is a stereotypical Egyptian tune that you'd expect to hear in any heavily themed slot of this type, it's not at all terrible, but there's no alternative soundtrack when the reels are being spun, so annoyingly you'll be hearing the same loop over and over again.

Egyptian Pays is quite a stripped-down slot that doesn't require too much from players. There's three buttons in total, a stake selection button on the left-hand side of the game screen (that sees players set a stake anywhere between 0.20 and 20) and a spin button and settings button on the far right-hand side of the game screen. Interestingly, players must hold down the spin button in order to set up to a total of 100 autospins.

This high volatility slot is a bit of a mixed bag for us, on one hand, it has as below average RTP of just 95.58%, but on the other hand, it does allow players to pick up a maximum win of 12,500x their initial stake, which is pretty nice.

As is the case with all high volatility slots, we'd only recommend playing this if you've got a decent chunk of cash set aside to play with as it can be a frustrating experience. You will pick up some decent-sized wins over time that are well worth the wait, but this slot can still be pretty unforgiving at times, so beware!

Egyptian Pays is not a bad game at all, it just takes some getting used to, one thing we'll definitely say is do not judge this slot until you've made it into the re-life bonus spins round, because that's where things start to get tasty! The maximum payout is nice at 12,500x your stake, however, the RTP does still let it down.

Play Egyptian Pays now at the following verified UK slots sites. These slot sites are fully licenced and have been thoroughly vetted and reviewed by us to ensure they offer a great user experience, are trustworthy, secure, and have a wide variety of the best online slots in their lobbies including Egyptian Pays:-

Enjoyed Egyptian Pays? Here's a handful of similar slots we think you'll like too. These online slots have been chosen based on features and themes similar to Egyptian Pays. You might also want to check out other Inspired Entertainment slots.