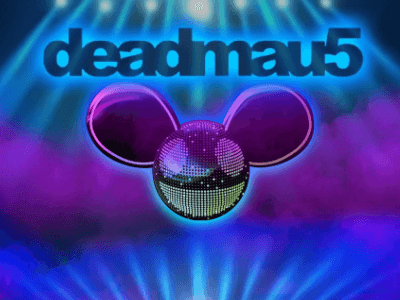 Deadmau5 slot is a 5-reel, 243 ways to win Microgaming slot that's based on the world-famous masked producer and DJ of the same name. If you're into your dance music then there aren't too many games out there that will please you quite as much as this one. In addition to a great soundtrack, the game boasts bonus features and mechanics including randomly selected wild reels, rolling reels and a generous progressive multiplier trail during the free spins bonus.

“ Deadmau5 had the potential to be great, but fell a little bit short of the mark ”

Deadmau5 Slot has a handful of exciting bonus features and mechanics that players can sink their teeth into, however, before we can talk about them we need to look at the general mechanics of this slot.

This 5-reel, 243 ways to win title utilises rolling reels (which is essentially re-branded cascading reels), this means that whenever players trigger a winning combination of symbols they're removed from the game so that a new set of symbols can fall into place, very much like a free spin after each and every win. There's no limit as to how many times the reels can cascade.

During base gameplay players may trigger the Drop the Wild™ Feature, this is a bonus feature that can see reels 2, 3 or 4 turn wild randomly at any given moment, guaranteeing a winning combination.

Either 14, 20 or 25 free spins can be triggered when players land 3, 4 or 5 Mau5head scatter symbols anywhere on the reels. During the free spins bonus feature players can trigger the Progressive Multiplier Trail. Whenever players win the rolling reels kick in, each cascade sees a multiplier climb up a notch to a potential maximum of 10x.

It's worth noting that this multiplier resets after an unsuccessful free spin that yields no win.

The Drop The Wild™ is a bonus feature that can trigger at any time during base gameplay. This feature sees reels 2, 3 or 4 randomly turn wild forming a guaranteed win.

Players can trigger 15, 20 or 25 free spins 3, 4 or 5 Mau5head scatter symbols land on the reels respectively. These free spins come with a Progressive Multiplier Trail.

During the free spins bonus players can trigger the Progressive Multiplier Trail. Whenever players win, the rolling reels kick in, each cascade sees a multiplier climb up a notch to a potential maximum of 10x.

Deadmau5 slot is a 5-reel, 243 ways to win slot developed by Microgaming that's based on the world-famous producer and DJ of the same name. This slot not only offers not players a spectacular audio and visual experience but also comes bundled with a whole host of lucrative and genuinely exciting bonus features and mechanics including randomly selected wild reels, rolling reels and a progressive multiplier trail during the free spins bonus.

As you would expect from a heavily branded music-themed slot, this title boasts two officially licensed Deadmau5 tracks, these are 4Ware and Monophobia, both of which play on a loop throughout gameplay. In terms of the overall design, this slot looks pretty decent and is an explosion of neon colour, featuring visuals from Cube v3 tour. Low paying symbols are bright card suits, blue diamonds, purple spades, green clubs and red hearts. High paying symbols are five beautiful women that look to be dancing along with the music. The game's special symbol is the iconic mau5head logo.

If we're being brutally honest, we probably expected a little bit more from such a high-profile branded slot, there's no doubting that Deadmau5 is an iconic household name in this day and age, but this just slot feels a little bit forgettable and bland. It wouldn't have hurt them too much to add a little bit more to make this game really stand out.

In terms of navigating the slot and general gameplay, Deadmau5 is as straight forward as they come. There are four buttons players need to be aware of that are all placed to the right of the game reels. These buttons (from top to bottom) are the autoplay button (that allows players to set up to 100 automated spins), the spin button, a turbo button and a stake selection tool (that allows players to change their stake between 0.20 and 60.00).

One game-breaking thing we did notice when playing Deadmau5 is the fact that there's a small x in the top right-hand corner of the game screen. When clicking the autoplay or stake selection buttons and opening the corresponding menus, in order to close the menu players must make a selection (even if they don't want to) or click anywhere on the screen outside from the pop-out window. Naturally, we went to close these screens using the small x, frustratingly this actually closes the entire game leaving us needing to reload completely.

This high volatility slot falls flat when it comes to winning potential, the RTP is slightly below average at 95.22% and the maximum win is 2,100x the player's stake. This isn't terrible, but it didn't particularly wow us either.

Deadmau5 slot is a good game, but that's about it... We generally expect big-name branded slots to blow us away but there's nothing here that made us sit up and take note. If you're a fan of Deadmau5 then you might well enjoy it, but we honestly can't see many people playing this and becoming a fan as a result.

Play Deadmau5 slot now at the following verified online slot sites. These slot sites have been thoroughly audited and reviewed by us to ensure they offer an exceptional user experience, are trustworthy, safe, secure, and boast the best variation of online slots in their portfolio including Deadmau5 slot:-

Enjoyed Deadmau5 slot? Here's a handful of similar slots we think you'll like too. These online slots have been chosen based on features and themes similar to Deadmau5 slot. You might also want to check out other Microgaming slots.