Danger High Voltage is a slightly strange 6-reel, 4096 payline slot based on the hit 00s song of the same name by Electric Six. It's hard to work out what this slot wants to be, but nevertheless, it's a fun play and we certainly get a kick out of hearing that song! Players can choose one of two free spin bonuses, the High Voltage free spins, which offers 15 free spins with full reel wilds that pay up to 66x your initial stake. The other is the Gates of Hell free spins that see random sticky wilds come into play.

“ A strange slot with an epic winning potential ”

Upon landing 3 scatter symbols anywhere on the reels during base gameplay players will trigger a free spins bonus. There are two different options players can choose from, these are as follows: 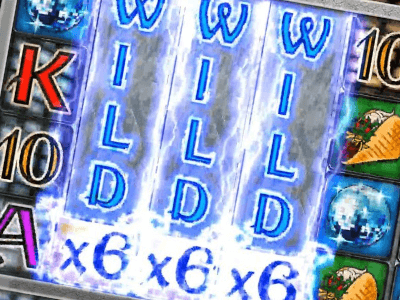 At any time during base gameplay Wild Fire and Wild Electricity full reel wilds may come into play, these are wilds that cover the entire reel and can multiply players wins up to 6x. 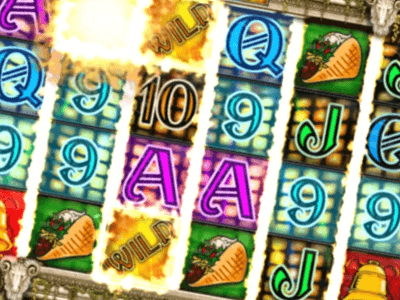 Players receive 7 free spins where one of the game symbols will become a sticky wild in reels 2 to 5 for the duration of the bonus feature. 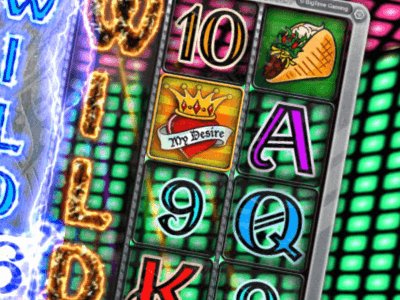 Players receive 15 free spins which can see a High Voltage wild appear on reels 2 to 5. This high voltage wild can multiply adjacent wins between 11x and 66x.

Danger High Voltage is a bizarre 6-reel, 4,096 payline slot developed by Big Time Gaming that's based on the hit 00s song of the same name by Electric Six. It boasts lucrative full reel wilds and two free spins features that offer players sticky wilds and multipliers that reach as high as 66x.

As mentioned earlier in the review, we can't really work this slot out. We know it's a title based on the rock song of the same name, but that doesn't explain the overall design or theme of the slot. It's a little bit confusing as to what it wants to be.

The reels are set in front of what looks like a music video set with neon lights and strobe lighting blinking and changing colour in the background.

Low paying symbols are your standard royal suit, 9, 10, J, Q, K, A whilst your high paying symbols are a taco, a disco ball, a bell and a jewel-encrusted skull (don't ask us why they choose these as symbols, as they don't seem to match up or make much sense in the grand scheme of things). The game's scatter symbol is a tattoo of a heart wearing a crown and sash that reads 'My Desire'.

When wild symbols show up on the reels there are dramatic electric sparks. But that's it, there's not really any other sounds other than faint crowd noise until a winning combination has landed. It's quite underwhelming for what's essentially a branded slot based on a real-life chart-topping song.

However, we have to say everything changes when three scatter symbols land and the free spins bonus begins. The original Danger High Voltage song by Electric Six begins playing in its entirety and bolts of electricity cover the reels.

There's no denying that it's incredibly cool when it all kicks off and the bonus starts, but it does have us wondering why the game can't be like that all of the time? If players never actually trigger a bonus during their gameplay they'll never realise how fun this slot can be. If you're going to have a slot based on a song, then maybe that song should be playing throughout?

This game is set-up in the same way as any of Big Time Gaming's slots. Players can change their overall stake in the bottom left-hand corner of the game screen (to anything between 0.10 and 40) and access a hamburger menu that brings up the game's paytable and game options. In the right-hand corner of the game screen, there's an autospins button (that can see players set up to 100 automated spins) and a play button.

High Volatility slot Danger High Voltage has a disappointingly low RTP, which sits at just 95.67%, but it does have an impressive maximum win that can see players win 15,746x their stake. Ultimately like everything to do with this slot we're feeling 50/50. But when it comes to winning potential there are more positives than negatives.

Danger High Voltage is worth playing based on its win potential alone, it's fair to say it's never worth turning away a slot that can pay out in excess of 15,000x your stake. Yeah, all over the place in terms of design and theme, but it does still have a degree of charm.

Enjoyed Danger High Voltage? Here's a handful of similar slots we think you'll like too. These online slots have been chosen based on features and themes similar to Danger High Voltage. You might also want to check out other Big Time Gaming slots.