Celebration of Wealth is one of three games that make up the Wealth Series of slots developed by Play'n GO. This 5-reel, 7,776 payline slot comes with five different free spin bonus games, each offering a differing number of free spins with a differing grid size and ways to win. This slot is part of the four-tiered Wealth Series Progressive Jackpot.

Jump straight into the action and play Celebration of Wealth now at the following fully licenced UK slot sites. These slot sites have been thoroughly audited and reviewed by the team here at Slot Gods to ensure they offer an exceptional user experience, are trustworthy, safe, secure, and boast the best selection of online slots in their portfolio including Celebration of Wealth...

“ Enjoy 7,776 ways to win, free spins AND a huge progressive jackpot in this Oriental slot ”

Celebration of Wealth is all about the ways to win! This game sees players unlock more paylines when they trigger a free spin bonus (upon landing 3 scatter symbols). Once they've done so they'll be offered six different free spin options which are as follows:

Aside from the free spins that come with a significant number of ways to win, players can also potentially trigger one of four progressive jackpots. The Wealth Series Jackpots are shared across all three games in the Wealth Series. These jackpots are as follows:

When players land 3 or more scatter symbols on the reels they'll trigger a free spins bonus that sees them with 6 different free spin choices, each offering a different number of ways to win. 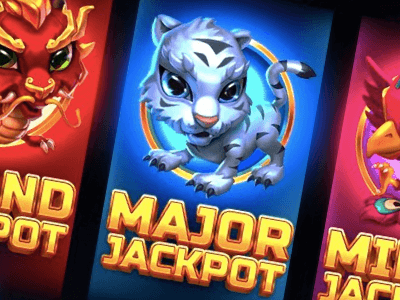 Reels can randomly turn golden, if a wild lands within a gold reel then players will trigger a pick and click mini-game that sees them in with a chance of winning one of four progressives.

Celebration of Wealth is 5-reel, 7,776 ways to win Oriental-themed slot developed by Play'n GO. This innovative jackpot slot is part of the Wealth Series, a trio of games that each share the lucrative Wealth Series Progressive Jackpot.

This cheerful progressive jackpot slot can see players trigger free spins with a total of 7,776 paylines unlocked, which of course could lead to some very lucrative winning spins.

Celebration of Wealth opens with a vibrant firework display, setting the tone for this upbeat slot that's all about celebrations, as the name would suggest! There's no fancy imagery behind the reels like you might find in other games in the Wealth Series, but that's not the end of the world because there are some wonderfully designed symbols to enjoy.

The game's wild symbol shows animated Fu babies happily banging a drum, whilst the scatter symbol is a Chinese town with animated fireworks exploding high in the sky above it.

When it comes to sounds, players are treated to an upbeat celebratory song that you'd expect to hear played during a parade or another form of celebration. Whenever a wild symbol lands a drum beat is played and whenever a scatter symbol lands fireworks explode.

Celebration of Wealth is set up like most Play'n Go slots, and is identical to the other two Wealth Series games, with an action bar set across the bottom of the reels. On the left-hand side of the bar the player's balance is displayed, next to that there's an information button that gives players details about the game's paytable and bonus features.

In the centre of the action bar is the section where players can select their stake limit, these stakes can range from 1.00 to 50.00.

On the right-hand side of the action bar players will find a large green spin button and a smaller orange autospin button that lets players set up to 100 automated spins.

At the top of the reels are the four Wealth Progressive Jackpots, the Mini, Minor, Major and Grand Jackpots.

This high volatility slot has a fair RTP of 96.2% and can see players win up to 5,000x their initial stake during base gameplay. If that wasn't quite enough this slot also sees players in with a chance of winning one of four progressive jackpots that have prizes that creep into the tens of thousands of pounds.

Celebration of Wealth may only have the one bonus feature (if you don't count the progressive jackpot), but that's alright... It's quite unique to come across a game that unlocks thousands of paylines specifically for the free spins round, so we genuinely enjoyed that. Throw in the decent win potential and maximum win and you've got yourself a good slot that's worth a spin!

Play Celebration of Wealth now at the following verified UK slots sites. These slot sites are fully licenced and have been thoroughly vetted and reviewed by us to ensure they offer a great user experience, are trustworthy, secure, and have a wide variety of the best online slots in their lobbies including Celebration of Wealth:-